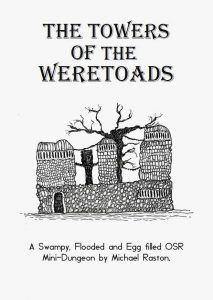 This mini-adventure clocks in at 6 pages, with one page devoted to the front cover, leaving us with 5 pages of content, so let’s take a look!

Okay, so are you familiar with One-Page-Dungeons? You know, where the map features also all the information on locales? This dungeon is depicted in that type of format – one page per level of the dungeon, which features basement, ground floor and tower/treetop-levels. Nice: The supplement uses red and black text and arrows to denote what’s what – when printing this, going color is a prudent way, as red notes rules-relevant aspects, saves, traps, etc. – all in all, this color-coding makes running the dungeon pretty smooth. The maps are hand-drawn and lack a grid – and there is no player-friendly version of them either, alas. Formatting, alas, does not print magic item-references in italics, which, particularly considering how busy the map looks, would have further enhanced direct usability.

The final page depicts two new creatures, including a neat b/w-artwork – both list movement with a 120’ standard, alignment (one axis), HD and AC – the latter both in ascending and descending manner. The pdf differentiates between saving throw types, and lists skills and things like abilities to climb or hide with a “x-in-6” formula. The critters do list morale values and suggested XPs. As for difficulty-levels, I’d consider this to be appropriate for 4-6 characters of levels 1 – 3, depending on the skill-level of your players. I strongly suggest that the party should have a thief on board, as well as some folks that are good at slaughtering things; other than that, no class is truly required to play this.

All right, only referees around? Great! So, there’s not much in the way of unnecessary backgroundstory – there’s a swampy ruin of three towers, with three trees, somewhere in the swamp. Go explore it! Weretoads are basically degenerate, wart-covered and exceedingly disgusting lycanthropes that the PCs won’t want to become – and this is good, for there are plenty of chances for them to contract the curse/disease while exploring this delightfully icky little dungeon. The change is btw. triggered by dusk tide, so clever PCs can get an angle – while in human form, weretoads are expert climbers; in toad form, they are even better and have a 4-in6 chance of hiding, so an assault during the day may actually be feasible. The second creature presented herein would be so-called bear toads, approximately of the size of a large dog. These toads have a pretty nasty jump attack as well as the ability to emit a debuffing croak.

The dungeon per se is surprisingly clever and open/free-form – there isn’t much in the way of a linear progression, with the three-level layout providing a good reason to switch places. A downside of the module would be that it doesn’t define how high a story is. This can make tracking transition from on level to another a bit more strenuous than intended. That being said, the dungeon otherwise offers some nice treasure, several rather detailed components are included. Additionally, some random chances to raise alarms can add further dynamics to the mini-adventure. Finally, and I very much enjoyed that, the lowest level is actually completely flooded – as a nitpick: It’s “hoard”, not “horde.”

Editing is generally very good on a formal and rules-language level. On a formatting level, the module could have implemented a couple of conventions more. Layout adheres to a two-column standard for the bestiary, one-column for the introduction text, and, well, all over the map for the main meat of the module. The cartography in b/w is solid, but lacks a scale and notes for level-transitioning. The pdf has no bookmarks, but needs none at this length. The artwork provided for the weretoad is b/w and neat.

Michael Raston’s mini-module is a fun adventure I very much enjoyed; it has a delightfully icky theme, and the flooded level is a nice touch. The icky weretoads are cool adversaries, and as a whole, you can do a lot worse than this; particularly considering that this is available for PWYW! As such, my final verdict will clock in at 4 stars – if you are looking for an easy to prep, quick swamp-module, check this out!

You can get this nice mini-module here on OBS for PWYW!

Enjoying my reviews? please consider leaving a donation or supporting my patreon.