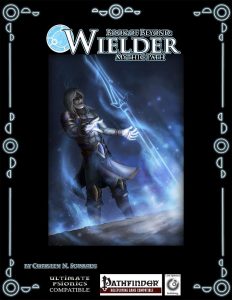 Okay, so one thing I enjoy about Lost Spheres Publishing’s supplements would be the concept of different sources of power – the pdf recaps these: The power-sources are arcane, divine, entropic, material, psionic and temporal.

Okay, so what do the Materia-wielders of e.g. Final Fantasy 7, Arthur and green knights have in common? They derive their power from things; as such, the wielder attempts to encapsulate this concept, and is recommended for occultists, wizards and rogues, or any other character who focuses on wielding items. The supplement does mention worlds and cabals known for wielders. A tier in this path nets 5 bonus hit points, and a wielder technique, chosen from a list of three – these are printed in italics, which this time around, does not impede the functionality of the rules-text (no spell/SP/item-name reference), but still struck me as a bit odd. Anyhow, the first of these choices would be dual trigger – this one lets you expend a use of mythic power to use two abilities of an item that would take a standard action to activate, or the same ability twice. Thankfully, other limiters, such as charges, mythic power required and the like still remain in effect, preventing this from being cheesed. The second technique, lightning finisher, lets you expend a use of mythic power as a full-round action to trigger a standard action item ability as a swift action instead. The DC, if applicable, of the action, is increased by ½ (tier +1) for every successful attack (such as one executed with a weapon) this round. Once more, other limitations remain in effect. This is known as “lightning Finisher.” Thirdly, there is the option to expend a use of mythic power to add tier to all attack rolls made with the bonded item. These attacks ignore all DR and decrease the effectiveness of energy resistances, if applicable, by 5 per tier for the purpose of energy damage caused by the item. All of these are extraordinary, just fyi. This ability is called “penetrating strike.”

“But wait”, I hear you say, “what if I don’t have a bonded item?” Well, for the purpose of this mythic path, a bonded item doesn’t necessarily have to be a bonded item granted from a class feature – any item granted by a class feature, feat or trait with sufficient importance for the character will do; this can include heirlooms, mind blades, etc. – while personally, I wished that the pdf had used a term that was not already “occupied”, once you know this, the path looks less restrictive. The path then proceeds to present 29 (unless I miscounted) 1st tier path abilities, and there are some creative ones to be found here beyond the obligatory one that lets you unlock one of the wielder techniques not previously chosen. Activated lore lets you select an occultist implement school that fits your bonded item. The item then grants you the base focus power as well as resonant powers of the implement. Spellcasters may add the spells to their spell list, and the item has a base allotment of 2+ tier mental focus invested in it; if you are an occultist, you increase your occultist level by ½ tier for the bonded item. You may select Extra Focus for it. Interesting: There is a path ability that lets your item transform into a creature, and if the creature is slain, the item goes dormant as if suppressed for as long as the creature was active. Forms available scale with tier. Minor nitpick: The ability would have been more elegant, if it tracked the rounds spent in creature form on a daily basis, but seeing how the ability costs mythic power to use, I am not adverse to this selection, as it discourages dispelling and renewing prior to battle. Smart design there! Magi can benefit from a path ability that increases the benefits of arcane pool points spent, and there also is a path ability that lets your item awaken as per either the intelligent item or psicrystal rules. There also is an option that makes the item not count as occupying your item slot. There is also a follow-up ability of sorts that lets the item use abilities when you’re dominated, paralyzed, etc. – of course, at the cost of uses of mythic power! I *think* this should only apply to abilities of the item itself, but could be read in a way that would grant the item autonomy over actions of your body, which is probably not intended. A slightly cleaner verbiage would be nice here.

Death charger is interesting – when you deliver the killing blow to a creature “within at least 1 level lower” and regain a daily or weekly charge limit ability, but the power recharged must be equal to or lower than ½ your HD or tier, whichever is lower, and you may only do so mythic tier times within a charge period. Essentially, this rewards you for mook sweeping by recharging limited use abilities, and it is very much cheesable – by design. There is a hard cap to the recharges, and while I am not 100% happy with it, it’s still a refreshing design that goes the inverse route of what we usually see from kill-to-recharge abilities. There also would be a path ability that nets you Leadership and the ability to share emotions with your followers – and let them know, as per augury, where you are or what you intend. I like this one – it has the potential to carry the concept of a whole campaign.

Now, I already mentioned the notion of power-sources, and it should be noted that there is a path ability that lets you choose a power source and treat the item as one or all of your power sources available – the utility of this one is obviously contingent on the amount of Lost Spheres Publishing books your using. You can also leech item charges or uses from it to replenish your own spell levels or power points, which is per se cool and requires very deliberate reading – only daily uses or charges qualify, so no, you can’t RAW get infinite spellcasting or psionic power points, even though it might seem like that for a second. There is also an inverse version, which lets you power your item instead. There are means to grant spell-like or psi-like abilities to the bonded item, make it count as a spell focus/material component substitution (with a scaling value cap based on tier), and there is a path ability that builds on penetrating strike – as a nitpick, this should specify that it requires penetrating strike; while obvious from the context and verbiage, it’d still be nice to have that listed. This also extends to a couple of the higher tier path abilities, so you should be careful when choosing them.

The options here also encompass having the item heal damage as though alive, a brawler’s martial adaptability, and the option to expend mythic power to prevent the use of invested mental focus. There also is a cool means to prevent the expenditure of rage or bloodrage (with a cap that prevents the abuse of kittens for infinite (blood-)rage), bonus charges for bonded staves(wands, a slight bonus pool of power points, and limited replenishment of resources like mental focus, etc. via critical hits – once again with a proper cap. Better resonant powers, item copies (fake shades of Excalibur, anyone?) sacred weapon-like boosts and, if you’re playing with Path of War, there also is the means to get some limited martial maneuvers – and yep, this includes Weapon Group Adaptation, but only for the purpose of the bonded item. There also is a path ability that lets an additional weapon count as bonded, one that merges two item-granting class abilities, and one that enhances your CL and spell DC by enhancement bonus.

Among the 12 3rd tier abilities, we have higher level Path of War maneuver access, the ability to duplicate other items you made, an increase of enhancement bonuses (should have a note that the +5 cap remains in effect), generate temporary magic items, increase the theoretical enhancement bonus maximum by ½ tier (here, the +5 cap remains in effect) or, have the item count as always in your possession – including the means to perceive the area around it. The spell-reference here is not printed properly in italics. Did I mention the ability to have your soul magic jar’d if you die, then to mind swap  saps that take it? Yeah, cool!

The pdf closes with 6 6th tier abilities, which, once more, provide higher level Path of War discipline access, more means to bypass slot limits, free uses with some powers, further enhancing of the magic jar trick, additional targets affected by your item abilities, and change abilities between bonded items. Cool! The capstone 10th-tier ability lets you regain a use of mythic power when you defeat a mythic foe who has ONLY taken damage from your bonded item during an encounter.

Editing and formatting, while not always perfect, are pretty impressive – apart from a missed spell-reference and the tendency to not list prerequisites in abilities that build on others, there isn’t anything to seriously complain about – a rather laudable fact, considering that the pdf attempts some complex rules-operations. The pdf adheres to a 2-column full-color standard and only sports the cover artwork of Mythic Paths of the Lost Spheres and the pdf’s cover artwork as interior art; it should be noted that there is quite a lot of content jammed inside, so don’t be fooled by the page-count. The supplement comes fully bookmarked for your convenience.

Christen N. Sowards’ wielder path is a creative and fun mythic path – the item focus is pretty complex, and the emphasis on uncommon power sources such as psychic or psionic energy makes it stand out. There are plenty of cool themes that you can execute with this one, as a whole, I genuinely consider this path to be worth getting and introducing to your game. While it does require some serious system mastery and close-reading, this can be considered to be a great supplement, particularly if you’re like me and are using a plethora of options in your game. All in all, my final verdict will be 4.5 stars, rounded up.

You can get the entire Book fo Beyond here on OBS!

Enjoying my reviews? Please consider leaving a direct donation, or supporting my patreon. Every bit helps.