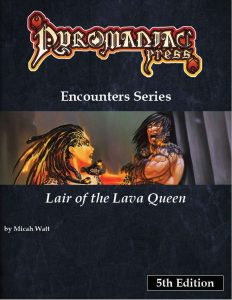 As the PCs approach the complex, they will hear strange, howling sounds, which will hamper communication and impose disadvantage on Wisdom (Perception) checks and lower passive perception (nice catch!) within several areas, already pointing towards the importance of terrain in the module – as far as I’m concerned, a big plus. Speaking of plusses: The pdf sports well-written prose and read-aloud texts for each of the regions – a relevant boon for GMs who are less versed in maintaining a coherent atmosphere.

And yes, witnessing this horrific scene can render PCs frightened on a failed Charisma save (nice one – 5e tends to tie Charisma to resolve, so this makes sense to me!) – nice to see some proper use of conditions there! The tactics of the lava queen are potent indeed and her abode has been constructed with the obvious intent of defending the place! Searing hot air currents and a new creature (think challenge 9 “magma-squid” with fiery rends and a fatiguing aura…and lava jets) await here. Cool – the creature can stack exhaustion levels on the PCs, but thankfully caps at 3. Also nice: The conversion done here not only mirrors the aesthetic statblock formatting of 5e, it also gets the creature right. No glitches, apart from a single missing blank space…and that’s aesthetics.

Worse yet for the PCs, the lava queen has an artifact, the eye of Imix, which can bathe the wielder in flames and heal him – but also renders subjects to its powers incapacitated. It also heaps exhaustion-levels of the user and may even kill the wielder – but the healing as such cannot be cheesed. I do have two complaints here: 1) The artifact lacks a suggested means of destruction and 2), while it can be used offensively, it has no mechanics noted for its offensive use apart from “touch” – does that mean melee attack here? I assume so, but yeah. It also sports a non-italicized spell-reference. On the plus-side, the healing effect is not cheesable, which is a definite plus…and not sure whether you’d want to carry around an artifact that lets an evil elemental deity know your whereabouts…

The lava queen herself is btw. a unique medusa with a blistering aura, lava-like blood and no, she cannot be petrified via her own gaze…oh, and she can fling balls of lava. Oh, and know what’s amazing? Unlike the PFRPG-version, this one has no glitches, making her a potent and deadly boss with smart tactics and some nice staying power.

Editing and formatting are very good on a formal level – no complaints there. On a rules-language level, the 5E-version of this sidetrek is clearly superior to the PFRPG version – treasure has been adjusted, builds are correct…no complaints. Layout adheres to a nice two-column full-color standard and the pdf features really impressive full-color artworks for the queen and the critter, with in particular the glorious cover-artwork making this potentially worthwhile for art-aficionados. Cartography leaves nothing to be desired, as far as I’m concerned. The pdf has basic bookmarks to front and back cover and editorial, but at this length, that’s still okay.

Micah Watt’s Lair of the Lava Queen is an extremely flavorful sidetrek dungeon with impressive production values for the price. I adore the flavor, I love the prose and even the flaws of the artifact, minor though they are, don’t weigh too heavily for me here – they only scratch at the verdict of what can be considered an impressive sidetrek. Better yet, the stats, unlike the PFRPG iteration’s, are correct and portray a flavorful, cool boss well worth fighting.

And then there’s the fact of the bang-for-buck-ratio: This pdf is really, really cheap. As in: Ridiculously cheap for what it offers. 2 bucks. The art and map alone and the critter are pretty much worth investing the time to briefly tinker with the map.

While the very minor hiccups in the artifact do annoy me slightly, this is not truly enough to drag this version down – for 5e, this is well worth a final verdict of 5 stars. If you have the luxury of system-choice, go for the 5E-version.

You can get this great sidetrek here on OBS!