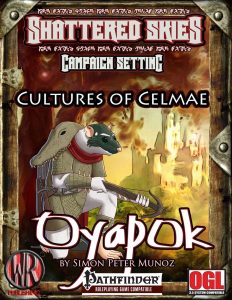 This installment of the Cultures of Celmae-series clocks in at 12 pages, 1 page front cover, 1 page editorial/ToC, 2 pages of SRD, 1 page back cover, leaving us with 7 pages of content, so let’s take a look!

So, what are the oyapok? They, as a race, are relative newcomers to the world of Celmae, a marsupial humanoid species that hails from the swamps and only rather recently has made their way to interacting with the other folk of the world. While their first sojourn towards integration was thwarted by a rather nasty dragon named Dessuterrix, they are industrious and pretty optimistic folk with a generally positive outlook on life. The race comes with proper age, height and weight information, though it is not presented in the standardized table format – still, as far as I’m concerned, that’s just cosmetic.

The race, as should be no surprise, values family and employs a nomenclature derived from French, with “mamere” and “papere” being titles, thus, in general, evoking a resonance with the tropes of e.g. Cajun culture that extends to cooking habits. Animism ad the importance of respecting one’s environment and a generally good outlook on life conspire to make their fully depicted deity, The traveler, a nice fit for the race, even though the deity’s symbol is dangerously close to that of a particular Faerûnian deity…

Nomenclature etc. is provided and racial stat-wise, they are Small humanoids that gain +2 Dex and Wis, -2 Str, have a slow speed (not properly bolded) and gain +4 to AC versus reptilian threats. They gain halfling luck (which should have been renamed “Oyapok luck”, +2 to Survival, +1 to attacks versus giants and reptilian foes, low-light vision and both Hold Breath and a massive swim speed of 50 feet as well as a prehensile tail. The race, generally, ranks as one of the stronger races and, depending on the campaign, can be rather potent or on par with the core races – this hinges foremost on how much aquatic environments will feature in the campaign.

The pdf also sports two racial archetypes, the first of which would be the traiteur cleric, who replaces domains with river’s blessings – which is unique: It makes touch spells behave as though they have a range of 5 ft. per class level, but this range is predicated on traiteur and target being within the same body of water. While the wording for ranged touch spells is a bit wonky, it still functions. Touch spells thus cast gain +2 CL for the purpose of overcoming SR. This is VERY powerful, but situationally so – and it kills off one of THE most defining cleric abilities. Traiteurs also learn to scoop up water, imbuing it with positive energy, and pouring it over wounds. This has a range of 10 ft. and heals 1d8, +1d8 for every 2 levels thereafter. Starting at 7th level, you may replace one of these healing die to remove a negative level and at 15th level, as a full-round action, you can submerge a creature completely under water, maximizing the healing effect. This can be used 3 + Charisma modifier times per day and channel energy modifications may affect this. Speaking of which: It is pretty evident that this is supposed to replace channel energy, which it does not explicitly state. Otherwise, it should probably be a variant channeling effect and draw on the same resource.

The second archetype herein would be the foudre warpriest, who replaces aura with a whopping +3 CL for determining spell duration when summoning elementals. The blessings class feature is replaced with lacerations of the elements: At first level, choose one of the standard 4 energy types. As a standard action, a single creature in a 30 ft. radius takes sacred weapon damage + Charisma bonus damage of the chosen energy. To nitpick: energy=/= element and attributes are capitalized, as are saves: With a scaling Will-save, this may be negated. Fervor can be used in conjunction here. Starting at 7th level, replacing sacred armor, the foudre gains elemental wisps, granting SR equal to 10 + 1/2 class level, rounded down. As an immediate action, expend a fervor when attacking to hit as though using a sacred weapon.

Editing and formatting are decent, certainly better than in most Wayward Rogues Publishing books – while some rules-language should be clearer and while some cosmetic formatting glitches can be found, the material is generally functional. Layout adheres to a two-column full-color standard and is pretty nice, with nice, comic-style artwork for the oyapok. The pdf, annoyingly, is not properly bookmarked. Worse, the pdf does NOT allow for the copying and highlighting of text, which means you’ll have a sucky time when extracting text from this pdf.

Simon Peter Munoz and Jarett Sigler (quoted as Jerret Sigler in the editorial) provide a nice, inexpensive culture-file. The oyapok are an interesting race that should fit well within most settings and contexts. While the archetypes have a couple of rough edges regarding the rules-language and would have needed some capable dev to make them work properly, the prose and flavor make this potentially worthwhile if the cultural tidbits are what you’re looking for.

If you’re looking for mechanics, I suggest going elsewhere; however, if flavor and concept are what you’re looking for, then this may provide some enjoyment for you. My final verdict will clock in at 3.5 stars, and I’d usually round up due to in dubio pro reo, also because I really wanted this to be a win for Wayward Rogues Publishing, but compared to other files and the harsh standards I apply to comparable files, that would frankly be unfair. Hence, I have to round down, though, if you’re looking primarily for flavor, this is well worth checking out.

You can get this unique culture here on OBS!