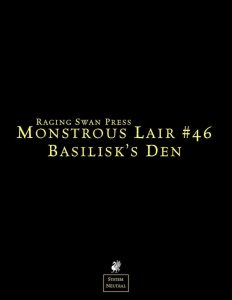 So, outside of the lair, we can find massive barbarian statues, around which thick moss and vines have grown, massive lizard-tracks, and e.g. statues impaled on rocks or branches – in short, there is a savagery, a randomness and bestial quality to the dressing, which sets the basilisks properly apart from e.g. the  medusa. Well done! As for what’s going on, we can witness a basilisk defecating gravel-like substance that stinks of rotten eggs, we can find them in the process of doffing furrows with for their eggs…and what about using a petrified elk’s head as a kind of chew-toy? There is a general sense of fantastic plausibility for these creatures here, which is a good start indeed.

As for major lair features, we obviously have the obligatory petrified beings, and there is a focus on those, but much to my joy, there also are, for example, petrified mice as a tripping hazard, fragile spider carvings on the wall and the like – while these could have been a bit more varied, the petrification-angle has been executed rather well. As for minor lair features,, we have a young basilisk petrified by inadvertently gazing into a halfling statuette’s mirror, weaponry gripped in hands of stone, grisly piles of stone body parts, or broken basilisk teeth around a petrified dwarf-head, proving that the stout folk’s fabled thickheadedness is retained in stony death.

As for the different basilisk appearances, we can find scales of different colors, basilisks that have seen their fair share of combat, sporting blotches and missing horns, heterochromia, and the like – these not only allow for different contexts regarding biomes, their respective execution also drives home the unnatural nature of these beings. Treasures suggested include cured basilisk hide, gore-covered, reflective shields, figurines that can create essentially basilisk-y mounts and the like – and what about cloaks that let you merge with stones, or the cultist’s chalice that fills with basilisk blood on command? Rather cool array! As for the less useful miscellanea/trash that may be found in those lairs, we have broken swords, stone mice peeking from cracks in the wall, broken weapon and armor, with petrified limbs still attached – all in all, a cool array.

Steve Hood’s take on basilisks is a well-crafted, versatile dressing file. While the bestial basilisks obviously are essentially animals, and as such, there are a lot of petrification-themed components, and the pdf manages to retains the sense of the fantastic and retain some groundedness. While not as versatile as the excellent hydra-dressing, this still remains a great, inexpensive little dressing file. As such, my final verdict will clock in at 4.5 stars, rounded up.

You can get this cool, inexpensive dressing file here on OBS!