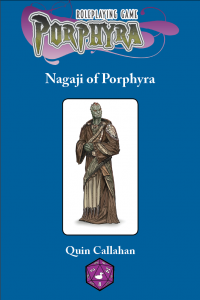 This installment of the „…of Porphyra“-series clocks in at 33 pages, 1 page front cover, 2 pages of SRD, though it should be noted that one of the SRD-pages also contains a bit of information taken from a magic item update. The pdf is laid out in 6’’ by 9’’ (A5), which means you can fit up to 4 pages on a given sheet of paper.

As always: While this is intended for the Porphyra RPG currently being playtested and streamlined, the book as a whole is properly compatible with PFRPG 1e with minimum fuss. This was moved up in my reviewing queue at the request of my patreon supporters.

After a brief bit of introductory prose, we start with notes on the physical description and ecology of nagaji, and their society – which seems to be hell-bent on amassing enough money and power to reclaim a glorious past that may never have been; hell-bent of punishing the Porphyrite Dragon (which, while awesome, should be referred to as awful from the nagaji’s perspective) and reclaiming a glorious empire, the by now tribal people worshiping Empress S’sluun certainly represent an interesting angle on the racial concept. Ironically (for serpent people) poisoned by ideology and religion, the race includes notes on various faiths prominent among the nagaji-people of Porphyra. Proper vital statistics are included, and nagaji in Porphyra get +2 Strength and Constitution, -2 Intelligence, are Medium reptilians with a normal speed, low-light vision, +1 natural AC, +2 to saves against mind and poison descriptors (nice taking advantage of one of Porphyra RPG’s improvements), and a +2 racial bonus to Perception and Handle Animal.

7 alternate racial traits are provided: The skill boost and low-light vision may be exchanged with darkvision (which works differently in Porphyra RPG and thus has no range listed – that’s not a glitch!); the save-boost  may be exchanged with one that applies to disease and poison and includes being able to go longer without food and drink before starving. The skill boost may also be exchanged with a 1/day SP hypnotism, using HD as CL. The spell-reference is not italicized here, which may be subject to change depending on the way in which Porphyra RPG ends up establishing formatting conventions.  Similarly, nagaji may exchange their resistance with a +1 racial bonus to attacks against prone or flanked targets. There also is a trait that replaces the reptilian subtype with the human one and nets you a nasty social skill penalty, but also a boost to initiative. Poison use can be chosen in lieu of the skill-boost and the armor can be exchanged for a boost to Stealth, courtesy of darker scales.

The pdf includes 5 race traits that actually are mechanically-relevant, power-levels-wise in line, and that do tie in with the race’s lore – nice! After this, we get 6 different new racial feats that highlight another nice thing in Porphyra RPG – they have a line below, after which they note a BAB-value. Once you reach this value, you unlock new benefits! Blood of the Serpent requires that you fail two saves to move down the poison progression track, and at BAB+6, you get to choose two tracks and become immune to poisons of those tracks. Cool! Guarded Thoughts nets +4 racial bonus to saves vs. mind descriptor spells, and BAB +11 upgrades that to include immunity vs. divinations with the mind descriptor. Naga Speed lets you bite as an immediate action when a flanking ally hits, and BAB +8 upgrades this to allow an ally an AoO when you hit with the bite. Snaketongue lets you communicate with snakes, and BAB +4 makes snakes helpful. Sharp Fangs nets you a properly codified bite attack (strength should be capitalized, though); at BAB +8, you get a poisonous bite. S’sluun’s Warrior nets proficiency with the sawtooth sabre, and CMD to resist demoralization increases by +4 while wielding the deity’s favorite weapon. BAB +9 makes the sabre deal 1 point of bleed damage and renders you immune to being demoralized.

The pdf proceeds to provide two racial archetypes: The Fanged Assassin for the Assassin base class gets proficiency with simple weapons, kukris, sawtooth sabres and short swords, and replaces poison use with the Sharp Fangs feat; Venomous Bite is gained at 2nd level.  16th level makes the bite ignore poison immunity, and the archetype comes with its own racial assassin secret. Class-skill-wise, this means we get Deception, Knowledge (dungeoneering) Knowledge (religion) and Survival . ½ class level (minimum 1) is added to Athletics and Sap checks, and the class features provide scaling poison damage, the option to spit venom, and poison upgrades.

The Naga Clanpriest cleric may use Knowledge (religion) instead of monster lore checks, and retry each Knowledge (religion) check once. At 2nd level and every 4 levels thereafter, the clanpriest may choose one of 6 marks; these represent fanatic devotion, and sometimes are double-edged swords. 3 unique and rather cool poisons are presented next, from red lotus powder to rapture, and we get 4 new exotic nagaji spells: Agony of the Naga Empress caused crippling pain that renders the target helpless. As an aside – the description did remind me of my own migraines…and yep, you are struck no matter what by pain – the save determines whether this is permanent. OUCH. At level 8 and properly gated by spell scarcity etc., suitable in a way. Breed Posion makes use of Porphyra RPG’s poison engine, enhancing duration and frequency. Shape of the Sacred Snake is a painful process that transforms the caster, body and mind, into an emperor cobra. Shedding Flesh makes you hallucinate that you’re shedding your flesh – not good for morale…

The pdf also sports 5 new magic items:  We get write-ups for arrows with a magical sleeping effect, idols that provide serious penalties, but reward those suffering through them with a boost (should specify that they don’t stack in effects with other idols), daggers that allow for the use of detect thoughts, and we get cursed rings that slowly kill targets in excruciating agony as a twisted kind of magical sacrificial device. Rings of the serpent make the wearers aware of other wearers, making for a deadly tool of elite strikeforces.

The pdf also surprised me by diving deep into nagan politics, with multiple faction leaders noted with their positions and ranks, adding some serious flavor to the pdf. The bastion of the naga, the Asp Fortress, receives a full settlement write-up as well, including a fully realized settlement statblock that lists qualities ad defenses, etc. The pdf also provides some neat updates penned by Mark Gedak – from universal monster rules referenced to emperor cobra stats to two magic item updates, this appendix renders the supplement easier to use. Nice one!

Editing and formatting are very good on a formal and rules-language level. The few glitches I found were cosmetic in nature. Layout adheres to a printer-friendly one-column standard with purple headers and highlights, and the pdf features some rather nice 1-page full-color artworks. The pdf comes fully bookmarked for your convenience.

This is, at least to my knowledge, Quinn Carter’s first offering, and I am happy to report that I ended up being duly impressed: The flavor is interesting, and the execution of the rules is precise. The supplement does a great job highlighting several of the improvements and unique components that Porphyra RPG brings to the table. All in all, I consider this to be a great example of what a well-crafted racial supplement can achieve. It also has achieved something that is worth noting: It genuinely serves as a great pitch for the entire Porphyra RPG. The changes to the rules presented, the concepts – they managed to make me truly excited about the game, making this a great first-exposure-pdf. My final verdict will clock in at 5 stars; and the combination of showing the system improvements, flavor and freshman bonus combine to grant this my seal of approval. If this type of book is what we can expect, then the future looks rosy…erh…I meant…purple, of course!

You can get this cool, flavorful pdf here on OBS!

You can directly support the creation of Porphyra RPG here on patreon!

Enjoying my reviews? Please consider supporting my patreon. It keeps the lights on.