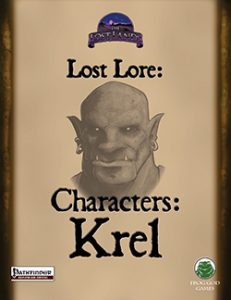 This installment of the Lost Lore-series clocks in at 10 pages, 1 page front cover, 1 page editorial/ToC, 2 pages of SRD, leaving us with 6 pages of content, so let’s take a look!

Who is Krel? Well, the half-orc barbarian (not archetype’d) is the unwanted progeny of an orc-raid: Born in misery, he has learned to hate his orcish half as he grew up in slavery, served on a galley…and when he helped defend the vessel from a pirate raid, he was made a free man…which is where the game comes in. Krel is intended as a go-play type of PC character – as such, his wealth exceeds that of NPCs, increasing his CR by +1. Point-buy-wise, he is a 20 pt.-buy character that favors melee with massive weapons over ranged combat. He also is pretty much the stereotype of the half-orc regarding his attribute array, favoring the physical excessively over the mental: With Int 7, Wis 10 and Cha 8, he is pretty much a dumb brute. It is somewhat surprising that his skills, Intimidate, Perception ad Survival, do not really make use much of the galley-background.

Presentation-wise, each of the iterations of Krel comes with sufficient space in an hp-column to write down the current HP below the maximum; similarly, a handy assortment of rage round counters allow for an easy striking away of expended rounds. As soon as he branches out to also include a bow in his equipment, a handy arrow-counter is similarly provided. Each of the iterations of the character does come with a minor statblock-adjustment while raging, providing the convenient “while raging”-stats. A bit of a lost chance: The pdf does not provide an unchained barbarian-iteration of Krel’s build.

As a nice piece of flavor, each of the respective iterations of the character (1, 5, 10, 15, 20) comes with a nice piece of flavorful background, deeply steeped in the lore of the Lost lands, to explain how he got the levels – in Krel’s case, he obviously has been to the Tomb of Abysthor and Razor Coast, making his base in later years in Bard’s Gate. The downside here, obviously, pertains the fact that these legendary modules may have been played by the group already… As a minor complaint regarding the progression of the character – some advice to scale him up by a level or two from one of the default statblocks provided would help…but oh well.

On the plus-side, and this is a pretty big deal, the pdf does come with Pathfinder Society Organized Play modifications suggested – one look at the handy sidebar and some minor modifications later you’ll have a PFS-character ready.

Editing and formatting are very good, I noticed no glaring issues. Layout adheres to Frog God Games’ full-color 2-column standard for the series and the b/w-artwork of Krel’s mugshot is nice indeed. On a downside, since this is pretty much intended as a go-play character, printing out the colored background feels like a bit of an unnecessary drain on the printer. Anyways, the pdf has no bookmarks, but does not necessarily require them at this length.

John Ling’s Krel is a solid character. The rules presented don’t leave much to be desired and he is, frankly, as subtle as a greatsword to the face. Krel is an efficient brute, susceptible to mental assaults and pretty much the epitome of the “XYZ-SMASH!!!”-type of barbarian. Which is both a strength and weakness of the file. You see, Krel is pretty much a great way to hand a novice player a functional character and have them join in the fun. Granted, such novices could use a bit of discussion regarding tactics or roleplaying angles, but oh well. At the same time, veterans will have seen this character before. His name may not have been Krel, but he is pretty much the straight barbarian. You know the kind. Heck, I don’t know a single group that has played d20 for longer than 5 years and did not have a half-orc barbarian at some point. The lack of archetypes or surprises there mean that Krel is efficient yes. But it also means that his archetypical, as opposed to archetype’d, nature makes him a predictable concept.

Much like the elven ranger. The dwarven fighter. Fluff could have provided an angle from a flavor-perspective here; crunch from a build-perspective…but this pdf does not really emphasize either. Since both are absent, we ultimately get a pretty blank slate half-orc barbarian. The target demographics here would then be new players and groups that have not yet seen this type of dude done to death, but for these groups, a bit of additional lore and the like would have, ironically, helped this installment of lost lore to shine more. The inclusion of advice on PFS-adaptation is a big plus, on the other hand. And while Krel left jaded ole’ me pretty much unimpressed since I can build this type of character sans hassle, it does have a raison d’être. It may not be a file you get to be blown away…but it can be useful. Hence, my final verdict will clock in at 3.5 stars, rounded down to 3 for the purpose of this platform.

You can get this character here on tabletoplibrary.com!