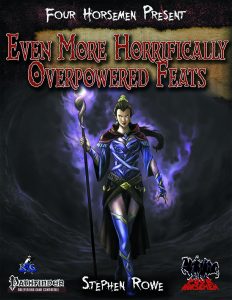 It’s been a while since we had Horrifically Overpowered feats or options in a book, so, here’s a quick history lesson: These options were crafted as an April’s Fool’s offering once, being broken by the very sentiment of their design, far eclipsing all of the tenets of what we expect from a feat’s power – to the extent where one of these feats basically increases CR of a creature by at least 1. So no, even in the mythic context/direct comparison, they exceed power levels of mythic feats for the most part. They were designed as instant upgrades and super-level “who cares ’bout balance”-style gameplay…purportedly. You see, the thing is that Rogue Genius Games’ Horrifically Overpowered feats have seen quite some use in my games for BBEGs, extra-high-powered one-shots and the like. Why? Because they still have some frame of reference.

It is a sad truth that I can mention several options out there that are less balanced than these feats. But I’m not here to embark on an epic rant; I’m here to take a look at this book. Anyways, so these feats are obviously horrifically overpowered and as such, can only be taken at the GM’s discretion and should be restricted to very high-powered gameplay or used as a means to upgrade the often woefully underpowered villains in published modules.

Unless I have miscounted, the pdf contains a total of 35 such feats, collected for your convenience in a feat-table. The feats within, to give you an idea, begins with Army Fighting, which makes you immune to flanking (!!!) and even makes enemies not count as flanking you AND it does not mean autohit on natural 20s against you anymore. Oh, and foes can’t aid each other against you. This feat pretty much perfectly encapsulates what I was getting at in the above: This is powerful as hell and the feat basically eliminates a significant assortment of builds and changes a basic truism of how the game works. At the same time, it lets you play basically Conan, Red Sonja or any Dynasty Warrior character jumping into the enemy lines.

Speaking of changing truisms: Clear Rage lets you still use Cha-, Int- and Dex-based checks and abilities while raging and eliminates the penalty to AC. On its own, this may no look bad, but give this to a decent optimizer and you’ll see a devilish glimmer in his/her eyes…there’s a reason for that. If you ever thought that barbs don’t deal enough damage…allow this feat and wait what happens. What about a full-blown sorc-bloodline or domain? Expansion of smite evil to all chaotic and evil creatures with bonuses versus CE foes (and antipala variant)? Yep. Adding familiar benefits to the animal companion (or vice versa)? OUCH! What about two bardic music effects in play at a given time?

That being said, the pdf does offer one series of feats which will actually see play in quite a few games that contain powerful races far beyond the potency of the core races, the so-called paragon feats. Grognards will appreciate them as well. Why? Well, the dwarven feat nets you immunity to poison, SR 11 + HD (or +5 to SR). Eleven Paragon makes you immune versus enchantment, nets you sight 4 times as good as that of a human and eliminates range penalty to Perception and makes you immortal, negating all age-penalties. Super-crafter gnomes that can attempt Craft and Profession as though they had HD ranks and are immune to illusions. These feats basically represent the more powerful takes on the core races and can bring them up to that insane multi-headed and armed ooze-thing your fellow player wanted to make.

There are some options I wouldn’t employ, regardless of the power of the game, at least for PCs – Fluid Style would be one such feat: It lets you enter the stance of ANY fighting style of a style feat…any style feat, even ones you don’t know. Oh, and switching styles? Free action. Yeah…I can see the uses, but this one most certainly should not fall into player hands in most campaigns. Instant crafting of magic items (1 day) can make sense in some games.

DR and Immunity versus damage types at the expense of vulnerabilities can be found alongside gaining bonuses to atk versus foes after missing them and even potential crits after several misses – this looks like a cool houserule for some games that emphasize cinematic action. There also is a crazy prepared feat (not the best I’ve seen – the concept can be done sans being OP) and an option to dismiss non-dismissable spells and change the precise type of spell cast – e.g. changing the fire shield employed.

If that doesn’t yet sound too amazing – let me present Meld: A teamwork feat that lets you and your allies combine into a gestalt entity, which is pretty cool…with one complaint: I think presenting a mechanic on which player gets to do what would have been more than helpful here. Another feat nets you. As a minor nitpick, Permanency could use a slightly cleaner wording: The feat nets you a spell or spell-like ability with a duration permanent…which *could* be read to include the “Duration: Instantaneous” spells it obviously was intended to exclude when “non-instantaneous” would have made it watertight and airproof, but it’s still clear enough.

Speaking of “clearer wording” -Stubborn has a troubling sentence in its wording: “You ignore any potentially negative effects of failing a skill check.” Does this extend to Acrobatics, Climb, etc.? Anyways, this probably would be one feat I’d disallow in ALL of my games, no matter how ridiculously high-powered I’d go, but if you really have players that deal badly with failing, even failing forward, this may be for you. Still, even in the Horrifically Overpowered context, I consider this one OP.

In case the above have not made that clear, both Super Strength (massive Str-boost) and Super Speed (+ 1 move action) should make clear that the power-level here is appropriately off the charts – this book’s theme is basically superhero style gameplay with the PFRPG-engine.

Editing and formatting are very good, I noticed no significant glitches. Layout adheres to RGG’s 2-column full-color standard with solid stock art. The pdf has bookmarks, but only for the table and basics, no individual bookmarks for the feats.

Stephen Rowe’s feats herein fall in basically two categories – takes on old-school gaming style for Pathfinder (which ends up increasing the power significantly!) or superhero style gameplay. The latter features some minor hiccups here and there, though none are grating and I’m not too fond of all options, there is bound to be some serious usefulness for some groups and GMs out there. The powerlevel remains, with some minor exceptions internally consistent within the design paradigms; when compared to the totality of feats herein and already in existence, there are some that transcend what we know from these feats…but then again, you’re reading a review of a book that blatantly states its intent in the very title. How to rate this, then? Well, I do like this pdf, but I have seen master Rowe handle things slightly better in the past; as a whole, this is a good pdf, bordering on the great, but slightly short of it. Hence, my final verdict will clock in at 4.5 stars, rounded down to 4 for the purpose of this platform.