The Secrets of the Taskshaper (13th Age)

The Secrets of the Taskshaper (13th Age) 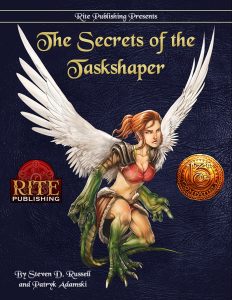 This adaptation of the taskshaper class to the 13th Age rule-set clocks in at 20 pages, 1 page front cover, 1 page editorial, 1 page SRD, 2 pages of advertisement, leaving us with 15 pages of content, so let’s take a look!

So, what is the taskshaper? In case you are not familiar with the exceedingly awesome background of the class – it is one of the most challenging classes to GM for in PFRPG, defined by the option to basically shapechange and poach abilities from monsters, a class suffused with great background info: You see, as the in-character prose that guides you through this pdf makes amply clear, the taskshaper is a creature changed by the fey, with themes of changelings and the mythological lord Auberyon being part of the deal. As such, after the well-written introductory prose, we dive into the particulars of the class.

The taskshaper has an original form – basically the race you had prior to becoming a taskshaper. They can choose either +2 Dex or Cha, provided they have not already increased said ability score, A smattering of sample backgrounds are provided for your convenience. You begin play with the gear of the latest person you impersonated, up to 50 gp worth and are wanted for a minor misdeed…or you halve starting gold and are not wanted and get decent clothes as well as light armor. And a simple weapon. Armor follows the 11 -> 13 -> 15 progression, shields netting +1.

The taskshaper being a unique creature regarding its flavor, thus proceeds to classify natural weapons by type – tables align these with one-handed or two-handed weapon equivalents and, from different bites to stings and special attacks, this classification is simple, to the point and easy to grasp. Ranged weapons gain a similar classification, just fyi. The taskshaper receives (8+Con-mod) x3 starting hit points, scaling up to x24 at 10th level. Each level nets a feat and 4th, 7th and 10th level provide ability upgrades, as noted. Damage bonus from ability score increases to x2 at 5th level and x3 at 8th level. The Form pool (more on that later) begins at 1st level and upgrades at 3rd, 5th, 7th and 9th level. Ini is Dex + level. AC is 11 + middle mod of Con/Dex/Wis +level; PD is 11 + middle mod of Str/Con/Dex +level; MD is 12 + middle mod of Int/Wis/Cha + level. The taskshaper gets 8 recoveries, recovery rate of 1d8 x level + Con-mod, 8 background points (max 5 in one), 3 icon relationships and 3 talents. When transformed, their basic attacks can govern hit damage with Cha instead of Str or Dex, both in melee and ranged combat.

The first class feature of the taskshaper would be perfect imitator, which allows you to assist allies with tasks or repeat a task you have observed. At champion-tier, you can use a feat to learn a wizard spell and cast it 1/day. You cast this via Cha and may replace the spell with another, provided you can learn it from a spellbook. The Epic tier feat can even uncover repressed memories via this copying, provided you beat the MD of the creature. The second class feature would be Moment of Change, which allows you to 1/battle gain minor bonuses as a free action by reshaping your body. You may also use this ability as a quick action to shapechange into one of your forms known or the combination of forms known. Additionally, you can expend this moment to modify an assumed form. Adventurer feat nets +1 such moment, Champion-tier’s feat increases the aforementioned bonus and nets another moment, while the epic feat provides +2 moments of change per battle. Additionally, 1/encounter, you regain all moments upon becoming staggered. Here, presentation is a tad bit confusing – the dev’s note mentions 10 moments for a scenario of two epic-tier taskshapers duking it off, which is, obviously correct -it’s 5 per character. The dev’s note does make that sound like it’s 10 per character, so a bit of confusion there. Moments of change are regained upon a short rest. Reverting to your original form, just fyi, does not require moment o change expenditure.

The taskshaper class also receives some talents, the first of which allows you to mimic an object – which becomes particularly unique at epic tier, when you can assume full properties of objects, including magical bonuses and special abilities, but the special abilities do require the expenditure of moment of change uses and size-requirements and restrictions still apply, but may be overcome with your shapechanging. Slightly odd from a wording point of view: The epic-tier feat also nets the option to conduct a ritual to make a functional non-combat utility copy lasting for 1 hour per moment of change used – this looks like you *create* the object, while the reversal clause does imply that reverting to your original form takes longer. Basically, I *think* the taskshaper turns into this item, but the wording is simply a bit opaque here.

Shift Condition is intriguing – it allows you to expend recoveries to delay/temporarily halt conditions, ongoing damage and last gasp saves, with epic tier allowing you to transfer these to adversaries…thankfully, this does reset the counters. Troll Blood improves your healing capacity, making the save easy to use full effect recoveries, with the epic feat granting you 10 hp of healing for 5 minutes. This is a bit odd, since even a regular troll’s regeneration is tied to uses in battle, not a time-frame. Protean Touch makes your face and body malleable, allowing you to freely assume other guises and grants you a free 5-point background, with champion-tier weaponizing this to allow you to prevent touched foes from taking move or quick actions, while the epic-tier feat lets you grant limited shapechanging to your allies…and gain a touch that can pulverize foes.

So, what exactly do the forms do and how do they work? Well, you begin play knowing 4 forms, learning new forms requires a first-hand experience. Thereafter, provided you can learn a new form, one day of experimentation does the trick. You retain your size unless specifically noted and can speak in forms. Unless specifically noted, items do not change with you. Upon becoming disabled or dying, you revert to your original form and while forms have no duration, you only regain moments of change when resting in your original form. You may also use moments of change to only partially transform parts of your body – these never cause damage to yourself. You retain a certain recognizable quality when changed and forms assumed come with a 20-entry table that sports unique distinctive marks.

Now here is the cool thing regarding the forms – the respective transformations offer some non-combat utility, modifications of defense-stats, natural attacks and provide you with a selection of diverse abilities – you choose multiple such tricks when you assume a form. Beast Form, for example, would allow you to gain +2 to AC and PD in addition to the base form’s modifications and make you venomous. Or, you could be venomous and constrict. Or increase damage die of your attacks and gain a 16+-triggered secondary attack. Some suggestions for e.g. which of these traits would be appropriate for e.g. bears, etc. are a welcome bonus. Starting at level 3, aquatic beast forms, ooze and plant bodies are unlocked, while level 5 unlocks the avian beast form, elemental body (air, earth and water). Level 7 nets you access to diminutive and large size, Elemental Body (Fire) and level 9, finally, lets you take the forms of dragons and, yes…even swarms! The forms themselves are varied and unique, their fluff being pretty awesome and they actually also feature quite a few interesting things to consider: Fire Elemental Body, for example, nets you a cool vs. PD attack with ongoing fire damage…but also makes you susceptible to non-flammable liquid and weakened if you have no material to burn.

That being said, personally, I’m a bit of a stickler for precision and partial change and its interaction with the forms could have used a bit of clarification -when I take e.g. the fire elemental’s body, does this mean I get aforementioned weaknesses? The ability for the PD-attack mentions that it replaces the regular attacks – but what if one only assumed parts of this form? I *assume* that’s not possible since it and a bunch of the other forms have the “body”-caveat, which looks like it means that it is only available for total change…but I am not sure. A bit of clarification for such cases would be nice, even though GMs can probably handle these decisions.

Conclusion:
Editing and formatting are top-notch on both a formal and rules-language level. Layout adheres to Rite Publishing’s two-column full-color standard, is nice regarding art-direction and the pdf comes fully bookmarked for your convenience.

Patryk Adamski’s adaptation of Steven D. Russell’s cool taskshaper class works exceedingly well for the most part. While I consider the relatively few moments of change a bit too restrictive, (Boys, I need to take a short break…again.), that is a relatively easily changed component that can be attuned to a given campaign. The unique and complex options of the taskshaper are somewhat simpler in 13th Age than in Pathfinder, but that does make sense and actually does the class some good – the acquisition of forms and their limits ultimately requires no GM-book-keeping in this version, which is pretty awesome. At the same time, there are a couple of instances where the otherwise precise rules-language could have imho used some further clarifications regarding specific interaction with shapechanging objects, partial changes, etc. While these issues are not glaring, they do mean that the GM is required to make some judgment class when the class is used. Still, this does manage to convey the unique nature of the taskshaper to 13th Age – and that is a great thing.

How to rate this, then? Well, while not perfect, this is an inexpensive, evocative addition to 13th Age, one that particularly should be interesting for more experienced 13th Age-players. My final verdict will clock in at 4 stars.

You can get this neat class for experienced players here on OBS and here on d20pfsrd.com’s shop!