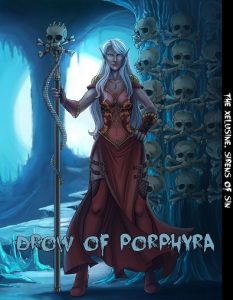 The third book taking a look at the diverse types of drow stranded on the patch-work world of Porphyra clocks in at a massive 29 pages, 1 page front cover, 1 page editorial, 1 page SRD, leaving us with a massive 26 pages of content, so let’s take a look!

“You know us. You have always known us. We are what you wish you could be in your darkest moments, when you cannot help but give in to the worst of what you are. We have all the grace you lack then, and none of the regret.” This is how this pdf begins, and it is a perfect introduction of both the in-character narrative that suffuses this pdf and to the nature of the Xelusine – they sprang forth from asceticism thwarted, from a wish most tainted and they killed their god, from his corpse erecting the primordial pillars of sin, metaphysically reaching out from the void beyond dreams and omens…and they don’t even end up in either abyss or hell – an eternity of sin and debauchery await them in Hamarita.

The Xelusine are the poisoned honey on a voluptuous body, the shuddering ecstasy that changes one’s life, the end of guilt; an embodiment of an addictive personality; the dark and handsome stranger; the smoking dame that just smelled like trouble that walked into the room; the decadent courtier; they are the relationship that is self-destructive and yet the most fulfilling you can imagine. They also sport a structure of circles and sin-based factions (obviously 7, one for each mortal sin), each with its own specialties – what the truth about them is, how they work – the in-character prose is delightfully crafted as it slowly reveals the truths of the race…or does it?

The pdf provides a full-blown, wonderfully detailed decadent code of conduct for the Xelusine, the dance, and the triumph of their decadence is indeed lavish, intoxicating even, in its depiction – with a Karza’s call to war against them as a well-written counterpoint. Rules-wise, the Xelusine get the Silver-tongued racial trait, guidance, beguiling gift and unnatural lust as SP and also a vulnerability to diseases. It should come as no surprise that this subrace of drow features a significant array of alternate racial traits that tie in with fey-like tricks and sin-themed tricks.

The pdf provides favored class options for bards, clerics, druids, hetaera, monks, rangers, rogues and sorcerors, with clerics following the 7 sins, with associated domains and subdomains. FYI: This pdf comes fully hyperlinked to d20pfsrd.com, with the good type of hyperlinks – nice! A vile rite of sacrifice and actually evocative, unique traits are provided – with cult leadership score modifications, etc. The pdf also sports relatively concise and brief rules for satisfaction and temptation. Wait, I should probably mention the rather cool Cult Leadership feat featured herein – why? Because it actually also has cool downtime exploits for the cult cell and even sports mass combat rules info! KUDOS! At 5th level, there is a feat called Masochism, which ties in well with the torture/interrogation rules and helps against Intimidation – and, as a nice bonus, it is NOT evil. Still, not the most compelling feat I know – but nice to see nonetheless. (Seriously, I really loathe the stigmatization of BDSM and coding of it as evil…)

Want to know, though, what made this pdf even more worth it for me? The concise rules to create custom aphrodisiacs. Think of that as a more complex variant of the Karza’s poison creation, but for addiction-inducing things and practices. And yes, *I* really wanted this and it’s the only PFRPG-book I know of that has proper rules for the like. The pdf also provides an armor-type that helps the seducer and, like previous installments of the series, we do get sample cities and adventure hooks for these.

Beyond all of these, the pdf offers a ton of domains/subdomains for the Xelusine – from the Apathy domain to its Conceit brethren, they are cool, though there are minor formatting glitches here – like a bolded ability name that should be italicized…but that’s, ultimately, cosmetic. The pdf closes with two new spells – one that creates an extra-dimensional den of sin and the second one, which fires a sin blast – a victim struck sees his or her actions in the next round restricted according to the sin. (This one uses a d7-die to determine the sin- which is a bit odd. I happen to have one, but if you don’t, use a d8 with 8= reroll.)

Editing and formatting are very good, I noticed no significant glitches in either formal or rules-language criteria – kudos! Layout adheres to Purple Duck Games’ two-column full-color standard and the pdf comes fully bookmarked for your convenience. The pdf sports gorgeous full-color artwork, one of which (in case you’re prude) shows a tastefully drawn nipple. (Which probably is one reason this does not have the PFRPG-compatible logo.)

Okay, the Nalbrezu were already awesome; the Xelusine? Oh boy. Pure, glorious decadence; the poisoned nectar, the scions of delicious sin; tainted and evil, yes, but oh so rewarding. Patricia Willenborg has really hit her stride here; the aphrodisiac-rules are tasteful and concise; the depiction of the race superb and well-written. The supplemental material and balancing of the drow-subtype is tight and the writing is evocative, fun and inspiring. This book, much like its predecessor, is well-written, concisely presented and takes a novel, mature and unique take on the drow – one that does not shy away from the subtext that has been part of dark elf lore ever since their inceptions in various fantasy worlds.

I love this pdf; it was a great read and has provided more ideas for drow and encounters with them and how they operate than most other books I’ve read on the race. The Cult Leadership rules are tight and may be worth it even if you’re not interested in the Xelusine as such – this is fun, unique, well-written and daring. Two thumbs up for this one. My final verdict will clock in at 5 stars + seal of approval.

You can get this evocative supplement here on OBS and here on d20pfsrd.com’s shop!