The Secrets of the Twisting Colossus (5e)

The Secrets of the Twisting Colossus (5e) 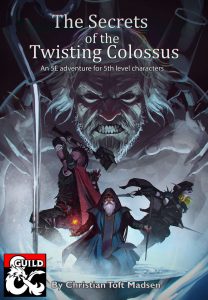 This module clocks in at 39 pages, 1 page front cover, 1 page editorial, 1 page ToC, leaving us with 36 pages of content. The module does come, however, with a bonus-pdf that contains no less than 17 pages of handouts, which is pretty amazing as far as I’m concerned.

Okay, so the first thing you need to know about here, would be the exemplary handout-array provided. I genuinely did not expect to see this level of support – the module comes with an extra pdf that contains no less than 16 pages! Some of these are plaques, while the others depict the exterior of the complex and the rooms – what the PCs see, in stark b/w. With a slightly grainy filter and the contrasts of these artworks, we actually have a VERY distinct, and dare I say, artistic rendition of the complex.  As a helpful aid for the GM, small renditions of the respective rooms are featured in their individual entries, providing helpful prompts when to give the players one of the respective handouts.

The map of the complex is depicted with a surprising amount of details, including a sideview that helps illustrate how the whole place is laid out. There are a couple of additional things you need to know: For one, even if you’re not interested in this as a module, it very much is worth reading on, for this, in a way, is one example of the rarest breed of adventure – a genuine puzzle-dungeon that makes sense. This module REQUIRES player skill over PC skill.

Another important note: If you’re one of the groups that use only a part of 5e’s rules to basically play an old-school hacked version of the game, then this module lends itself very much to that approach – some guidance has even been provided for this type of playstyle. Read-aloud text is provided for your convenience. While nominally intended for 4 characters level 4 – 6, this module is not a cakewalk – it is very much an old-school module in that it can be rather deadly if the players don’t take care! It is, however, pretty darn fair in its challenges.

This module has to be applauded for another aspect – it makes sense and is consistent. The traps featured herein are not based on the paradigm of crossing an invisible line and taking damage, instead adhering to an internal, logical consistency. Beyond rumors, random tables for objects and scribbles and similar supplementary content, the module also comes with a pretty impressive array of notes, and presentation of information is not only consistent, but uses bullet points, 5e-aesthetics (bolded headers in italics) and the like to convey information quickly, efficiently, and in a way that is easy to process while playing. For example, triggers, countermeasures and the like all get their own easy to parse paragraphs, sticking out and making the running of complex situations rather convenient.

It should also be noted that this module, with minor cosmetic modifications, could theoretically be set in our own world, courtesy of its surprisingly well-researched alchemy angle. Indeed, this may be one of the most-thoroughly-researched modules I’ve seen in a while, but in order to elaborate on that, we will need to go into SPOILERS.

All right, only GMs around? Great! So, in the aftermath of the last Great Modron March (nice shoutout to the Planescape classic!), the eponymous twisting colossus, a prison of sorts, has crashed on the material plane. The malfunctioning modrons inside have been tricked by the legendary alchemist Paricalus (Nice nod!) that he is the S-S-L: Substitute of Supreme Logic. (LOL – and yes, this does have a couple of nice insider jokes for the GM) They thus serve him unquestioningly – which is a bad thing, for Paricalus is a driven man who seeks nothing short of divine ascendancy via the means of alchemy.

In order to talk about this module, it is crucial to note that we’re talking about “proper” alchemy here – not the “I brew potions and make bombs”-type, but one that is deeply rooted in well-researched real-world lore. As someone who has studied alchemical texts and the surprisingly compelling magical logic and philosophy at their core, this was something that made me smile from ear to ear. You see, the twisting colossus is, in a way, reminiscent of deathtrap dungeons like the ones popularized by the CUBE franchise of movies, but each of the rooms is aligned with an alchemical process: Calcination, Fermentation, etc. – and yes, these and what they signify within the context of alchemical philosophy have been explained in a handy table.

The maze has an entry and exit chamber, and outer chambers that move alongside a linear path, as pearls on a string; inner chambers are immovable. Each room has a binary success/failure outcome, but there is actually progress for failure as well – the PCs aren’t simply locked out of moving forward. The in-game reason for this is simple: Paricalus is extracting the essence of heroism from those running his gauntlet – he thus has a vested interest in seeing the PCs continue and struggle, and eventually breaking them, but at the same time, has to avoid wiping them simply out. This makes the master alchemist a much more plausible villain that a ton of oh-so-smart archmages in various modules out there. Speaking of the BBEG here – Paricalus is one of the best bosses I’ve seen executed in 5e. Not only does he get his own, massive statblock, personality traits, conversation points and a whole page of unique items are provided, including the highly-volatile god-potion he seeks to brew. Did I mention the copious amount of magic mouths that establish rapport between the PCs and their adversary? Paricalus thus also provides “hints” for the PCs, and cues the players in to the reasons for this whole dungeon;: what would be arbitrary in another module is placed in a sensible and evocative context – all while conveying some genuine bits of knowledge.

This, alas, also brings me to the one thing that this module doesn’t do that well: Editing. The alchemist’s Arcana and Wisdom saving throw are off by +1, and in one instance, (Arcana) is erroneously-referred to as (Arcane). Prepositions and conjunctions are not always correct, there are instances of “roles” instead of “rolls” and the module’s prose tends to stick to short, simple sentences that make reading this module not exactly the best experience.

That being said, please don’t stop reading! You see, this adventure is exceedingly rare not only regarding its genre; it’s also one of the very few adventures out there today that are not great to read, but ABSOLUTELY AWESOME to play. I am not kidding.  This may not be exactly well-written regarding the quality of its prose, but it is exceedingly well-designed regarding its set-up, its structure, its presentation and also its thematic consistency. Thankfully, the read-aloud text is slightly better than the rest, but this, as a whole, means that e.g. the brief local village-section in the beginning is probably one you won’t exactly consider to be genius. However, this module also, time and again, goes one step beyond what’s required. What do I mean by that? Well, the module offers a frickin’ appendix with extra puzzle rooms! Not one or two, but 5 (!!) of them.

Okay, I’ve postponed this long enough, let us check out one of the rooms to illustrate why I love this to bits: The PCs enter a room divided by salty-smelling pool with water lilies, and scratch marks on the wall. The ceiling starts crushing down, forcing the PCs into the pool, where properly codified mechanical tentacles attempt to grab them – a bronze ring below the water allows the PCs to end the threat of the trap. This is deadly and challenging in the right ways: The PCs have time to escape being crushed; they are faced with danger below, and the capability of both quick-thinking players and the powers of the PCs are required in equal measure to best this. Now, I could, of course, go through all the rooms, one by one – but I’d only be spoiling the coolest thing about this!

Trap-wise, this uses a design-paradigm conductive to roleplaying, and indeed, I honestly believe that this module is worth getting even if you have no interest in 5e or play a radically different game. Why? Because the theme and design-principles underlying the traps transcend the system – the primary value here lies not in the implementations of the concepts in the context of a system, but in the concepts themselves. To cut my long ramble short: This book is worth its asking price for the rooms alone!

Oh, and once the PCs do reach Paricalus’ laboratory, there’ll be alchemical experimentation tables and the like, presenting an impressive array of options in a more conventional environment. Yet, do believe me, the PCs will want to have their payback after this dungeon!!

Editing and formatting on a rules-language level is pretty good; particularly regarding formatting conventions, this is clearly above-average. On a formal level, the same can’t exactly be said. I really wished a capable editor/developer had gone through this adventure and spiced up its prose and eliminated some of the cosmetic glitches. Layout adheres to the 2-column full-color standard of many DM’s Guild products. Cartography is neat full-color and surprisingly-detailed, but no player-friendly maps of the interior rooms are provided. On the plus-side, the huge amount of handouts does offset this minor drawback. Much to my chagrin, the module does not come with any bookmarks – I strongly suggest printing this one when running it.

Christian Toft Madsen’s “The Secrets of the Twisting Colossus” is pretty much the definition of a flawed masterpiece. As a person, I absolutely ADORE this module. I am not kidding. This is a glorious gem that really deserves being checked out! As a reviewer, I can’t, alas, let the number of glitches, mostly cosmetic though they may be in their totality, slide. How good do I think this is? Had this received a bit more refinement, you’d be seeing this among my Top Ten Candidates. Yes, that good. While I can’t rate this adventure the full 5 stars, I still wholeheartedly recommend getting this gem right now, particularly if the unique implementation of the alchemy-angle even remotely struck a chord with you. My final verdict will hence clock in at 4 stars, but this does receive my seal of approval, denoting the achievement this imho represents.

You can get this amazing little gem for less than $3.00 here on DM’s Guild!

Enjoying my reviews? Please consider leaving a tip for my patreon – every little bit helps!