The Pugilist Base Class (5e)

The Pugilist Base Class (5e) 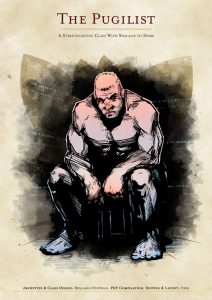 The pugilist base class presented herein clocks in at 8 pages, 1 page front cover/editorial, leaving us with 7 pages of content, so let’s take a look!

The pugilist base class presented here gets 1d8 HD and proficiency in light armor, simple weapons, improvised weapons, whip and hand crossbow as well as artisan tools, gaming set or thieves’ tools. The class is proficient in both Strength and Constitution saves and you may choose two skills from Athletics, Acrobatics, Deception, Intimidation, Perception, Sleight of Hand, Stealth.

The pugilist gains fisticuffs at first level – a variant of the monk’s Martial Arts feature that increases the base damage die by one step – it begins at 1d6 and scales up to 1d12 for base damage and, akin to Martial Arts, the class feature does not gain the Dexterity modifier substitution. However, when using the Attack action to make an unarmed attack or pugilist weapon attack, you can make an unarmed attack or grapple as a bonus action. As a minor complaint: The rules-language here deviates slightly from the precedence of the monk here. Pugilist weapons are defined as simple weapons without the two-handed property. Weapons used as pugilist weapons do not benefit from the finesse property. Weird: The class gains the whip, but it is RAW not included in the pugilist weapons.

The class also uses Constitution modifier instead of Dexterity modifier to determine AC when wearing no armor or light armor, which is pretty potent. This would be as well a place as any to note that the rules-formatting is not always perfect: Attributes here are not capitalized. Starting at second level, you gain moxie points, 2, to be precise – and these are upgraded to up to 12 over the course of the progression of the class. Moxie points are replenished upon completing a short or long rest and three basic uses are presented. As a bonus action, you may spend 1 moxie point and roll your fisticuff dice, add pugilist level and Constitution modifier (why not proficiency bonus instead of class level?) to gain as many temporary hit points. After executing an Attack on your turn, you can spend a point for +2 unarmed strikes as a bonus action. Finally, as a bonus action, you may spend 1 point for a shove attack or Dash. 2nd level also nets you a form of streetsmarts – once you have partied in a settlement for 8 hours, you know the public locations as though born and raised there. Imho, this should have a variable formula to account for settlement sizes. I can see that for thorps etc. – but not for e.g. a metropolis like Sigil. At 13th level, after carousing thus for a night, you btw. gain advantage on Charisma (Persuasion) and Charisma (Intimidation) rolls in that settlement.

At 3rd level, when reduced to below ½ maximum hit points, you gain class level + Constitution modifier temporary hit points and regain all spent moxie points. This ability recharges on a short or long rest – and frankly, I think it should only replenish on long rests. At 9th level, you may also add proficiency bonus to damage for one minute when activating the feature, though this damage boost only recharges upon completing a long rest.

4th level and every 4 levels thereafter yield ability score improvements. Additionally, as a bonus action, you can grant yourself resistance to bludgeoning, piercing or slashing damage for 1 minute, but thereafter you gain a level of exhaustion. 5th level yields Extra Attack as well as the option to swing wild haymakers – you may only do that for attacks not suffering from disadvantage, since the ability imposes disadvantage on your attacks, but an attack that does connect hits for maximum die result damage. This is problematic when multiclassing or handling pugilist weapons that add damage dice to the damage caused. The ability would benefit from a caveat that makes it only apply to the fisticuff base damage.

At 6th level, unarmed strikes or pugilist weapon attacks are treated as magic and 7th level allows you to use your action to shake off the charmed or frightened conditions. 10th level yields resistance to psychic damage as well as advantage on saves versus the stunned or unconscious condition – weird: Shouldn’t this first apply to the incapacitated condition and then move on to the more potent ones?

At 14th level, you gain advantage on all three physical saving throws and whenever you fail a saving throw, you may spend 1 moxie (not even a reaction) point to reroll the save and take the second result. I am not sure whether this rebrand of Diamond Soul’s save rerolls should work for all saves. 15th level doubles carrying capacity, jump height and distance and when dealing damage to an inanimate object, damage is doubled – I assume before damage threshold? Or after that? At 18th level, when you have 4 levels of exhaustion or less and are reduced to 0 hit points, you regain ½ maximum hit points, ½ maximum moxie points and gain a level of exhaustion – with a long rest to recharge. 20th level yields a Strength and Constitution increase by 2 to a maximum of 22 and you recover 2 levels of exhaustion when taking a long rest and you also regain all expended hit dice.

At 3rd level, the class may choose a fight club, two of which are included herein. These net features at 3rd, 6th, 11th and 17th level. The first would be the squared circle nets 3 new uses for moxie points for reaction grapple breaks, using reactions in opportunity attacks to grapple foes or add knocking prone to grappling. At 6th level, when grappling, you can use your reaction upon being missed to make the grappled creature take potentially the hit. 11th level makes you count as one size larger for purposes of grappling (ouch!) and allows you to move at full speed while dragging/carrying grappled creatures and 17th level lets you score critical hits on rolls of 19 and 20 against targets you have grappled. Basically, a grapple specialist and its execution is pretty neat indeed.

The sweet science would be the second fight club, who learns to spend two moxie points as a reaction to reduce the damage of incoming attacks – once again, using class level as part of the formula, which may cause some purists to scowl. When reudicng an attack to 0 damage, you get a counter attack, which can be pretty cool. 6th level yields the option to, as a bonus action after hitting with the quasi-flurry, add another attack, but only if both attacks of the flurry hit – but interesting: The attack knocks the target prone instead of causing damage. 11th level nets you a regained moxie point when pulling off a counter attack. Due to the moxie cost of counter attempts, this remains kitten-abuse proof. Good! The 17th level ability lets you roll 3d12 + 1d12 per moxie point you expend when hitting a creature – if the result exceeds the creature’s hit points, you knock it unconscious for 10 minutes.

The class comes with multiclassing notes, 3 nice pugilist simple weapons as a couple of magic items: unarmored AC-bonus granting magic leather jerkins, an everfull stein (can I please have one IRL?) and the rerolls-granting loaded dice. An amulet grants you more temporary hit points whenever you gain them (which can be problematic), while fist-based weaponry can help dealing with fiends and undead. A rare potion provides a static damage boost for 1 minute and a grappling whip as well as thundering fist weapons can be found. The magic items, while not bad, feel a bit focused on number-bonuses.

Oh well, the pdf closes with a sample challenge ½, 3 and 5 NPC making use of some of the rules.

Editing and formatting are good on a formal level. On a rules-language level, this is pretty impressive as well, often tackling complex concepts rather well. Layout adheres to the 2-column full-color standard established by the PHB, with solid art-choices. The pdf comes fully bookmarked for your convenience. The pdf comes with a second, printer-friendly version –kudos!!

Benjamin Huffman, with support by Ners, has created a class for all those folks who want Rocky, not a WuXia dude jumping around. One of my players loves the concept of martial artists, but hates the whole Eastern mysticism etc. – and this delivers. Emphasizing Strength and some SERIOUS damage-soaking abilities, the pugilist presented herein is less flexible and versatile in his tricks than the monk, but more potent at the same time – whether you like that or not is a matter of taste. I actually thought it’d be worse and plays better than I expected – while I am not the biggest fan of using PF’s class levels and basically 4th ed’s bloodied style mechanics to trigger some of the abilities, and while I wished it tried to use formulae akin to those employed by the base classes, but it does work out and this complaint is mostly aesthetic.

Note that the class is pretty potent and will eclipse the monk’s straight damage output, but lag behind in other disciplines., and I am not the biggest fan of the magic items presented herein – but the matter of the fact remains that this pdf is PWYW, which allows you to check this out and then judge for yourself whether this is worth getting. My final verdict will clock in at 4.5 stars – and while the imperfections would make me usually round down, I’ll round up due to the fair PWYW-offering.

You can get this cool class for PWYW here on DM’s Guild!