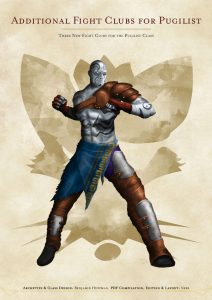 This expansion for the pugilist class clocks in at 4 pages, 1 page front cover, 3 pages of content, so let’s take a look!

The first of these fight clubs would be the Arena Royale – which creates an alternate persona. You make a Charisma (Disguise Kit) check at advantage. Creatures with passive Insight lower than that result will not recognize the character and unarmored AC is increased to 10 + Dexterity and Constitution modifier. 6th level may be a bit much: While in the alternate persona, you may make a Charisma (Performance) check to instill adoration or fear – all creatures within 30 ft that can see you must succeed a Wisdom save to avoid being charmed or frightened for 1 minute, with a long rest to recharge. Compare that to charm person, which has a fixed limit based on spell level used. That could use some nerfing. Why not tie the number of affected targets to proficiency bonus? Also, RAW, it does not end the charm effect upon being attacked, affects ALL creature types. This ability, in short, needs clarification and nerfing. Restricting affected targets, moxie point cost and decreased efficiency would make sense.

11th level yields +10 ft. speed when in persona, tripled jump distance and bonus action Dash – which probably should cost a moxie point. 17th level provides the ultimate mook sweeper: Signature move lets you jump into the air and smash down on a target – you crit if you hit and stun the target, no save (!!) – and you only expend it (requires a long rest to recharge) if you do not reduce the target to 0 hp.

The second fight club would be the bloodhound bruisers, who are basically martial detectives – 3rd level yields the options to spend moxie points for advantage on Intelligence (Investigation), Wisdom (Perception) in settlements or Wisdom (Insight) to determine when someone’s lying. 6th level provides a Sherlock Holmes movie style “in your head” planning, represented by Wisdom saves contested by Intelligence (Investigation), moxie-based attack evasion and moxie-based analysis of enemies (if they fail a save). 11th level allows you to attune yourself to a city: You cannot be surprised and add proficiency bonus to initiative; darkvision 120 ft; doubled proficiency bonus for aforementioned investigative skills and double movement rate to travel when not in combat. The doubled proficiency to skills used to negate attacks etc. is very potent and something I’d nerf. 17th level lets you spend 3 moxie points as a bonus action to get free access to all moxie-based features – no cost for 1 minute. OUCH. This tries to duplicate the Sherlock Holmes from the popular movies and I really like it for that, even though I consider it to be honestly a bit over the top regarding its power. The evasion tricks are better than those of comparable fight clubs.

The final option would be Salt & Vinegar, which gains an ability to infuriate targets via moxie-spiced insults, basically drawing agro and imposing disadvantage on attack rolls of targets not attacking you…oh, and the creature takes psychic damage. 6th level provides 3 moxie-based tricks to temporarily blind foes, slow them or knock them prone. 11th level increases the save DC for the insult by 2 and eliminates the moxie point cost for the insult….which means infinite psychic damage, which is almost never resisted. Not a fan. 17th level nets you the option to, as a bonus action, expend 3 moxie or enrage a target, forcing it to attack you. All in all, not a fan. Seen insults done better.

Editing and formatting re very good on a formal level, I noticed no serious glitches. Layout adheres to the PHB’s 2-column full-color standard and the pdf provides nice artworks by Ners and Alys Flock. The pdf has bookmarks, in spite of its brevity – kudos! Also nice: A printer-friendly version is included!

Benjamin Huffman’s new fight clubs for the already potent pugilist class leave me torn – on one hand, I love the Sherlock Holmes-inspired club…but the base class already is stronger than the monk…and these pretty much one-up the options. I have some concerns regarding all three fight clubs and they feel, as a whole, less refined to me than the options provided in the base book. That being said, this is PWYW as for higher-powered games, this may well work out. Hence, my final verdict will clock in at 3 stars.

You can get this expansion for PWYW here on DM’s Guild!