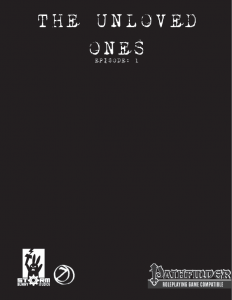 The first adventure for Bloodlines & Black Magic clocks in at 22 pages, 1 page front cover, 1 page editorial, 1 page SRD, 1 page back cover, leaving us with 18 pages of content, so let’s take a look!

Structurally, this module is intended for 3-5 1st to 2nd level characters, and obviously is intended as an introductory adventure for the setting/system. On a mechanic level, I liked seeing that we have degrees or success/failure represented in the adventure; beyond the usual read-aloud text for some scenes, we have more detailed guidelines for conversations – with suggested answers spelled out, so if you’re not that good at spontaneously coming up with that sort of thing, this has you covered.

A thing I appreciated particularly was that the module comes with suggested media for each scene to set the theme/stage; while I am not a fan of all suggestions (though I do like several!), the media suggestion helps you even if you don’t like a suggested song – in such an instance, you have a good idea at least regarding an alternative. Additionally, due to BL&BM’s setting, using well-known music won’t break immersion. Heck, it could be blaring from the radio, right? Two thumbs up!

Bloodlines & Black Magic is a contemporary horror setting/game, so this involves dark themes – in this instance, briefly touching upon suicide. The module begins right with a warning, and the number for the prevention lifeline in the US. Having lost more people in my life to suicide than to old age or any other cause, I wholeheartedly applaud this inclusion.

Okay, you know the drill: This is an adventure review, and as such, the following discussion will feature SPOILERS. Potential players should jump ahead to the conclusion.

Okay, only GMs around? Great! So, the module begins with each PC receiving a manila envelope that includes an address as well as a USB-drive; the invitation is dated 10 days from now, at exactly 7 PM, so there is some time for proper research – and here, the book makes great use of aforementioned setting/media-angle: The stick contains only a single file, an mp3 – to be more precise, Nivana’s “Come as you are.” The module accounts for various means of doing proper legwork with sample skill DCs and information noted, including using Pierce the Veil on the envelope. The letter was sent from Halifax, NH, and begins with a foreboding encounter – en route, a deer runs into the streets: Depending on whether the PCs notice it or not, the Drive check to avoid a collision will be influenced…and the module differentiates between different degrees of failure. Even if the deer is hit, quick-acting PCs can btw. calm and heal the animal, should they try to.

If they have an accident, they’ll have a chance to interact with the local police, and troubleshooting for seriously injured PCs and the like is provided. Nice! Arriving at Halifax, they’ll notice that the place is booked, with only the Old Country Inn having vacancies. While exploring Halifax, the PCs will have to contend with a surprisingly sudden storm, as well as with a now homeless person suffering from a PTSD-trigger, attacking the PCs. (As an aside, the module once more points out real life issues and help lines here – kudos! As a second aside: The monthly income noted of the fellow is higher than quite a few bad months I had. Not sure how I feel about that.) That being said, this is a good palce to note that the PCs are not exactly supposed to kill the man – they are not murder hobos, and if they do kill him in self-defense, they’ll face a serious charge. While they are let go on bail so the module can continue, BL&BM is not a kill-everything-game.

The invitation, by the way, was issued by one Jonathan Thatcher, who owns a quite sizeable two-storey mansion here – and yes, the PCs can investigate and trespass; he doesn’t mind, though even if they bypass the excellent mundane defenses, the PCs may end up facing some minor goetic spirits that could deafen them. The mansion itself seems to be warded against celestial incursions, imposing a penalty on seraphic bloodline characters, and the meeting with Mr. Thatcher may well be pretty tense (once more, troubleshooting provided), and essentially, the gentleman wants the PCs to locate a wedding band belonging to one Sarah Theraeux, who went missing with her husband in the 1920s. The man is obviously familiar with the veil, and can serve to fill in the questions the PCs (and players) might have. The ring, just fyi, can be dangerous – though Thatcher does not state why.

After this meeting and job offer, the PCs can do some research in Halifax; the research will point them towards Bailey House (curiosity turned local historical site), the home of Sarah Theraeux, née Bailey. Sarah’s father seems to have been a war casualty, while her mother ostensibly committed suicide in the house – creepy enough…but as the clues come together, the PCs will soon be led towards Adam’s Pond, where the vanished couple were last seen. The area with its cabins is btw. mapped in an impressive and PLAYER-FRIENDLY manner – kudos! The nasty psychic imprints here also manage to render a swarm of potter wasps aggressive, which make for the first truly serious combat encounter here – but which also will result in the other inhabitants of the cabins vacating the premises, so the PCs can sleuth around in peace. Clever PCs can find some treasure here, but the main goal is the well that became the grave of the couple, murdered by a man maddened and possessed. If the PCs find the key for the chains used to bind the couple, they’ll have found Sarah – who is now an undead draugr! Besting her will secure the ring, but careful PCs should wait – for draugr number 2, her husband…for he’ll come as well, and obviously be a threat to civilians if not dispatched properly…

Either way, the PCs have taken a first firm step beyond the veil, and may have a magic item or a powerful patron to show for it…

Editing and formatting are good on a formal and rules-language level. Layout adheres to a pretty neat 2-column b/w-standard with a surprising amount of nice b/w original artworks. Furthermore, the module comes with a really nice, player-friendly b/w-map of the adventure site; while a map of the town would have been nice, it’s not really required. The module comes fully bookmarked.

Jaye Sonia, with additional work by Brian Suskind, delivers a neat introductory adventure. The module sets up the scenes rather well, builds slowly tension, and then culminates in a cool finale. All in all, this is a successful first adventure for Bloodlines & Black Magic. Personally, I’d have enjoyed a bit more in the eerie foreshadowing department – don’t get me wrong, the module does this rather well, but it also spends a lot of time setting up the scenes and meeting with the benefactor. As a first “episode” that sets the scenes and introduces the players to the exciting setting, this definitely works, which is why my final verdict will clock in at 4 stars: A good introductory adventure to get into the game!

You can get this neat introductory adventure for BL&BM here on OBS!

Missed Bloodlines & Black magic? You can get this amazing game here on OBS!