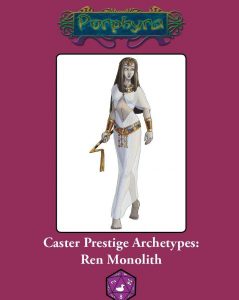 This installment of the Caster Prestige Archetype-series clocks in at 8 pages, 1 page front cover, 2.25 pages of SRD, leaving us with about 4.75 pages of content, so let’s take a look!

The ren monolith presented here is based on the living monolith PrC and the wizard’s chassis. As such, the prestige archetype receives d6 HD, 2+ Int skills per level, proficiency with club, dagger, dart, light mace, sling and quarterstaff. The class gets 1/2 BAB-progression and good Will-saves as well as the obvious full spellcasting progression, governed as per the base class by Int.

Speaking of build class: In a pretty unique and cool little pieces of flavor, these guys can meld their spellbooks with their forms! The ren monolith is implanted a stone scarab that provides a +2 bonus to saves versus mind-affecting effects, death effects and versus negative levels or those effects generating these. Additionally, 1/day, the ren monolith may cast any spell that can be found on their spell list, provided they’d be capable of casting the spell level-wise. They don’t have to know this spell, which is pretty potent from the get-go and may be problematic for some groups. Also at first level, these guys gain Scribe Scroll.

2nd level provides a + 4 AC bonus – and no, it’s NOT natural armor. Nice catch there! 3rd level yields “DR 1” (should be DR 1/-.) and “10 % immunity to critical hits and sneak attacks (as if wearing fortification armor).” While functional, this is uncharacteristically clumsy regarding rules-language and sans the example, could be misread. Anyhow, 7th level and every 4 levels thereafter increase DR by +1 and the fortification effect by +10%. To nitpick a theory-craft that’s unlikely to happen in actual play: Does the latter stack with fortification armor etc.? (No, this does not affect my verdict…)

Really cool: At 4th level, the ren monolith may 3/day as a standard action reduce person his size, masquerading as a figurine. 5th level yields at-will deathwatch and detect undead while the monolith concentrates (VERY cool: The player gets infinite use, but only when actually using it – nice for the GM!) 6th level yields auto-stabilization when in negative hit points and immunity to continuous bleed damage (wounding not properly italicized). 8th level provides stability and 9th level meld into stone at will. 10th level provides immunity to disease, including magical ones. 12th level provides +4 to Diplomacy when influencing sphinxes and 1/day planar ally to call a sphinx, which is upgraded to its greater brethren at 16th level.

14th level provides tremorsense 30 ft and 1/day stone tell. AT 16th level, the class gets immunity to petrification, as well as statue as a range personal-only spell-like ability – once again, the formatting here is a bit clumsy. While in statue form, any durations of spells or abilities do not elapse, which can be used by smart players to devastating effect. 17th level provides the option to 1/day either speak with dead or mark of justice that activates when listening to the ren monolith for 10 minutes. I am not 100% sure how that works with speak with dead, though 18th level yields contact other plane and 20th level provides immunity to energy drain and death effects and functional immortality.

The prestige archetype comes with notes for the use of the arcanist, psychic, sacerdote, sorceror and witch classes. Beyond specific favored class bonuses for the core races as well as anpur, dhampir eventuals, oread, xesa and zendiqi are covered regarding class-specific FCOs.

Editing and formatting are very good, I noticed no glaring glitches apart from minor, non-rules-relevant inconsistencies in presentations. Rules-language is less refined than in other installments of the series – while functional and thankfully not plagued by bad ambiguities, it feels a bit rushed. Layout adheres to a 2-column full-color standard with PDG’s signature purple highlights and is pretty printer-friendly. Huge kudos: The pdf comes, in spite of its brevity, with full, nested bookmarks, making navigation extremely user-friendly!

Carl Cramér’s Ren Monolith is cool: Flavorful, strong, with a distinct leitmotif, I love e.g. the figurine trick etc. It is a surprisingly flavorful option. That being said, its rules-language feels a bit more rushed than what I’ve come to expect from the author – the prestige archetype remains functional, but from a rules-aesthetic perspective, it is slightly weaker than other installments of the series. Still, the strong concept does carry it pretty well. Hence, my final verdict will clock in at 3.5 stars, rounded up for the purpose of this platform.

You can get this caster prestige archetype here on OBS!

You can get the whole subscription here!