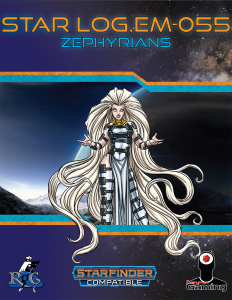 The first thing you’ll notice when checking this pdf out – we actually get roleplaying advice for the zephyrian race! Nice! The race may, at first glance, be mistaken for human, though their skin pigmentation does differ, and their increased hair growth means they have mighty manes – but this resemblance with humans that are into hair metal is only skin deep: The zephyrian physiology allows them to absorb radiation from sunlight to defy gravity, and a nine-chambered stomach allows them to digest A LOT. Adolescence sees hair hardens to facilitate a chrysallization process, as they dissolve and reform in this strange cocoon, with adult organs and all. Zephyrian tongues can also read the muscle memory of mouths they come in contact with, which can result in some interesting behavior patterns, to say the least – yep, they can learn languages by kissing. Their homeworld etc. is discussed, as is their strange society, which, while nominally sporting a king or queen, is an ochlocracy – ruled by the masses. Their “rulers” can quickly and unceremoniously be disposed of, and elections thus happen whenever enough people think it’s time for them, in what most folks would consider a chaotic mess. Proud and emotional, we get information on their changing nomenclature, and a proper subtype graft is included.

Racial stat-wise, zephyrians get +2 Strength and Charisma, -2 Wisdom, 6 Hit Points and are Medium humanoids with a base speed of 30 feet. Zephyrians have supernatural flight of 30 ft., with average maneuverability, but until 5th level, must end their movement on the ground or fall. Directly tied to their ability to feel unbridled joy, this also has cool roleplaying repercussions baked into the rules. Zephyrians can go 1 hour without breathing and exist in vacuum without suffering environmental effects, which can, depending on how you handle SFRPG-races, be a bit of a bummer – I wouldn’t allow them in Grimmerspace, for example, as this ability eliminates pretty much the threat of open space.

As a standard action, they can assimilate a language of a willing creature with a kiss, though only one language may be retained thus at a given time. New ones supersede old ones. They also are capable of absorbing ultraviolet light and transform it into photon bolts. As long as a zephyrian has at least 1 Resolve Point, they can unleash an energy blast that is treated as a small arms weapon attack with the bright and reload special properties. These bolts begin at 1d3 fire damage, and increase the damage output to 1d6 at 4th level. At 8th and 12th level, the base damage increases by +1d6 each, and at 15th and 20th level by +2d6 each. This ability, once more, is tied to an emotion – the ability to experience righteous anger. Emotion effects, just fyi, prevent zephyrians from using their two potent signature abilities. Problematic: Guess what’s missing. Yep, a range.

The race comes with two racial feats: Improved Star Flying requires 10th level and improves their fly speed to 60 feet and maneuverability to perfect. When not in immediate danger, zephyrians with this feat can accelerate to starship speed, at standard engine speed for quick interplanetary/stellar travel. It’d have been pretty cool to get rules for how they then interact with suddenly erupting star ship combat, but that’d probably have been its own supplement…still, this one may require some GM-calls. Stellar Zephyrian, a combat feat, requires the solar weapon class feature and makes the photon bolts use the higher between solar weapon or photon bolt damage.

Editing and formatting are very good on a formal and rules-language level. Layout adheres to the series’ two-column full-color standard, and the pdf comes with a nice artwork. The file has no bookmarks, but needs none at this length.

Alexander Augunas’ zephyrian race was a pleasant surprise to me: First of all, their strong emphasis on abilities that blend mechanics with roleplaying is awesome – though they do require mature gamers to handle properly. If unlimited, the race most assuredly will be much stronger than many comparable SFRPG-races, and imho overshoots the power-level somewhat. Perhaps that’s only me, but the second surprise here was that they feel like a love-letter to classic scifi and silver-age comic books. They reminded me of the New Gods or the Shi’ar – replace the shi’ar’s feathers with a mane…anyhow, for interplanetary romance, for games embracing these aesthetics, the zephyrians represent a great addition to the game. More low-key settings, particularly when space is supposed to be dangerous, will probably with to skip this one, though – such groups should round down instead. If, on the other hand, kissing folks to learn their language, if emotion-powered super-powers strike a chord with you and fit your game, then these come highly and warmly recommended. I really like the race, even if its appeal is less universal than usual for the new Star Log.EM-races. My final verdict will thus clock in at 3.5 stars, rounded down.

You can get this race here on OBS!