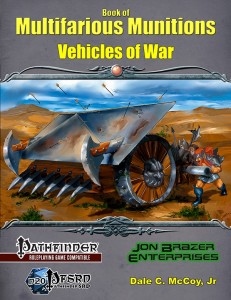 This pdf is 12 pages long, 1 page front cover, 1 page editorial/SRD, 1 page ToC/introduction, 1 page back cover, leaving us with 8 pages of content, so let’s take a look, shall we?

All right, first of all: I LOVE that we get new vehicles – they feature heavily in my campaign, make combat more dynamic and bring whole new tactical options and cinematic flair to a game. That being said, not a whole lot of books have tackled the subject so far, in spite of the existence of these rules since ultimate combat. Enter Jon Brazer Enterprises’ second Book of Multifarious Munitions and we thankfully get some new fodder to battle on and travel with – but does the vehicle-book hold up to its potential?

Well, the first of the vehicles is rather basic – a crescent-shaped hovering board, which, while based on magic, should also put a smile on the faces of any sci-fi aficionados that would enjoy some hover-board battles. By the way – an aquatic, no-current relying board is also part of the deal – something rather relevant for fans of Alluria Publishing’s great Cerulean Seas Campaign Setting. The fast and mobile halfling frigates may be small, but fierce indeed and multiple of these could take down larger vessels…

Speaking of small, but fierce: Kobolds get an AWESOME tool: AN alchemical, extremely painful flamethrower that should put the fear of these little critters into your players – put one of these in your kobold warrens and watch the PCs squirm when the little kobolds douse them in concentrated, searing death.

Now if you’re more of a fan of the Harry Potter-franchise or of the classic concept of witches flying on brooms, the vehicle-treatment for brooms of flying will surely put a smile on your face.

Of course, more mundane vehicles can be found in here as well, with three in particular addressing a mayor gap I’m surprised at it not having been filled before: Siege Towers! From ramshackle siege towers as probably employed by the huge horde of orcs to regular ones and the almost impregnable ones the dwarves employ, the siege towers could find a place in just about any campaign.

Fans of clockworks, whether in a steampunk-context or of Midgard’s Zobeck can also rejoice – there is a ram propelled forward by mechanical feet and controlled via a wand as well as a clockwork horse possessed by a demonic spirit (perhaps a lost design from the days of the revolt in Zobeck?) and, of course – a clockwork tank armed with a ballista. Clockwork  tank armed with a ballista. If that does not put a smile to your face, what does? I know I was grinning from ear to ear when reading this.

Now if warfare’s the name of the game – then mobile barricades will provide shelter for the poor infantry and protect against the muscle-powered reapers, deflecting shields studded with multiple blades and used to overrun adversaries. Have I mentioned the wind/air elemental-powered land barges, essentially armored troupe transporters? Now if you don’t want to get all into the fray, why not use a blade sphere?

What’s a blade sphere you ask? It’s a sphere of blades that doesn’t decelerate for two rounds after letting it go, shredding and waltzing through anything in its path – of course, if your players fancy themselves sky pirates, you’re in luck as well: On the one hand we get the low end of airborne vehicles with the flying wagon and on the other, the massive, intimidating, fortress shattering sky dreadnought – disabling one of these ought to be one epic hell of an adventure! And then there is the Warbird – if you happen to know a certain song “Flying on wings of steel…”, you know what to expect – A mechanical, bird of prey-shaped vehicle that WILL go down in the legends of your group: “Remember that one time we flew on the mechanical eagle…” -epic indeed.

Of course, characters and factions more in line with the sinister aspects of magic also get new tools: Take for example the Zombie Bone Chariot, which is propelled by fast zombies (also nice for post-zombie-apocalypse-settings à la the upcoming “Warlords of the Apocalypse” or “Obsidian Apocalypse”) or, one of my favorites, the bone skiff: A ship, which can be powered by channeling negative energy and which may extend up to 6 zombified arms (!!!) to attack a given target! This is disturbing indeed and gleefully so!

Editing and formatting are top-notch, I didn’t notice any glitches. Layout adheres to a printer-friendly two-column b/w-standard and the pdf comes fully bookmarked. Beyond even that, we get hyperlinks (and the good kind!) of rules-relevant concepts to d20pfsrd.com -as well as artworks. A total of 4 beautiful full color artworks are in here, all of which to my knowledge are not only original, but also make you want to use these vehicles even more – V-Shane and Rick Hershey did a great job.

WOW. I liked the book on ships – but this is a whole different beast! Not only do the vehicles cover a wide array of ideas and concepts, they are innovative and often feature unique modifications for propulsion, attacks or special qualities that set them apart. I hoped I would love this pdf – turns out, I adore it! Author Dale McCoy Jr. has created an extremely iconic, versatile array of vehicles that  are guaranteed to enhance your game – whether piloting them, fighting them or engaging in all-out warfare, whether on land or up in the heavens – this pdf delivers – in spades! Going beyond even what I expected, it delivers versatility, ingenuity, stellar ideas and marries them with top-notch production values – an all out joy to read and review, this pdf scores a hearty recommendation at 5 stars + seal of approval and is a candidate for the top ten of 2013 – it may be small, but like the kobold-flamethrower, it sets ablaze your imagination.

Get yourself a pimped-out war vehicle here on OBS and here on d20pfsrd.com’s shop!