Porphyra: Heroes of the Fenian Triarchy 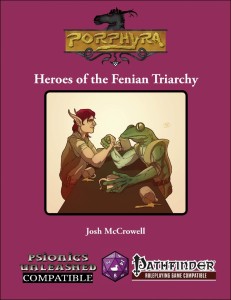 The first of the Porphyra-region books is 53 pages long, 1 page front cover, 1 page editorial/ToC, 2 pages of SRD, 1 page advertisement, 1 blank page, leaving us with 47 pages of content, so let’s take a look!

After a short, fluffy introduction into life in the swampy triarchy, we kick off with new races: Power-wise, they are built with 10 to 12 points via the flawed ARG-guidelines, which per se does not bode particularly well, so let’s see how significant the power-fluctuations/levels will turn out to be, shall we? The first race would be the boggards that get +2 to Str and Con, -2 to Int, slow speed, dakrvision, low-light vision, can hold their breath 4xcon score rounds, get a secondary attack with their sticky tongues, may ignore natural difficult terrain in swamps and emit the terrifying croak of boggards. Per se an ok race, though for my tastes slightly too strong – making tongue and croak available via feats instead of generally and getting rid of one of the senses would have made them imho balanced with the base races.

Next up are the feykissed – those with fey blood i their veins. The flavor text mentions a settlement called “MacCool”, which I SO hope will be renamed in the final setting  -seriously, what next? The hamlet DocAwesome? Bodacialisciousson, the metropolis? Yes, it’s a name, but one I consider jarring. Crunch-wise, they get +2 to Dex and Cha, -2 to Str, count as fey, get low-light vision, DR 5/cold iron, escape artist and perform as class skills, +2 to stealth and perception and may use charm person 1/day. A solid race, though I consider the DR MUCH too strong at low levels – dagger + commoner couldn’t even hurt a feykissed at level 1! In my game, I wouldn’t allow these, though I can see them work for other campaigns.

The Grippli are also covered  – basically, we get the base race from the ARG (which imho is already stronger than the core-races, albeit only slightly) and add MORE powers: They HALVE falling damage, are always considered to have a running jump, ignore difficult natural swamp terrain AND get a toxic skin usable 1/day – all in addition to the ARG races already considerable powers. Not gonna happen in my game, though I’ll probably take some of the rules and make them alternate racial traits, but balanced, imho, this race as written is not.

Half-elves get also a slight power-boost, with an added +2 to sense motive and +1 to DCs of sleep and divination-spells they cast as well as the option for half-elves of Cha 15+ to cast dream1/day. I actually like this slight power-upgrade for the half-elf, since I always thought the base race needed something distinct that sets them apart from their respective parent-races. Humans born in teh Triarchy can traverse hedgerows faster and suffer no penalties to acrobatics and stealth while in bogs and may use survival to detect quicksand even while running. What’s rather cool – there’s a chant of the reedlanders depicted and reciting it flawlessly by heart is suggested to provide a circumstance bonus to get rafts unstuck – this kind of information is what makes a given culture come alive and feel distinct, so kudos and two thumbs up!

The final race covered by the book would be the lizardfolk, who  get +2 Con and Wis, -2 Int, can hold their breath longer, get 1d3 bite and 1d4 claws as natural attacks, +4 to acrobatics and +2 to AC. Honestly my favorite of the races, execution-wise – while I’m not a big fan of the natural attacks, they remain not particularly strong and honestly – I can actually see myself allowing this race in my VERY restrictive home-game, so yeah – nice job there! It should be noted that each race I mentioned comes with at least one new trait to anchor them in the triarchy.

But enough on the topic of races, what about the triarchy itself? Well, we kick off the gazetteer-like section of the book with an overview of how lordship, an elected, non-hereditary title, is determined as well as that there’s the Triarch, a kind of high lord overseeing the whole triarchy, but also on an elected basis. We also get an AWESOME full-color map of the triarchy that is player-friendly to boot and which should enhance immersion in the region before we delve into the write-ups of the different settlements, all of which come with a full-blown settlement statblock, a short piece of aptly-written prose as well as several settlement qualities – and guess what: Apart from the stupid name, MacCool is actually a cool settlement! I’m now hitting myself for this dumb pun. We also get a full color player-friendly map of a typical village in the triarchy, based on one of Raging Swan’s b/w Village Backdrops – the color does add to the maps appeal, though.

Next up is the section on new archetypes, wherein barbarians may elect to become warrior poets, who may grant morale bonuses to allies upon critical hits or take 1/day 20 on a knowledge check or take 10. Rather nice – each one of the archetypes comes with a sample character – including a nice piece of fluff. The otherworldly druid is limited in domain-selection via nature’s bond and may opt to gain a fey animal as companion instead of a regular one. Furthermore, their wild-shape form is modified by further bonuses to reflect their closer ties to the realms of the fey – it should be noted that the sample character comes with a companion – something all too often neglected in publications.

Two new traps for the Trapper ranger archetype lead into the Wild Huntsman ranger-archetype, exclusively intended for the feykissed race. Escaping from these is problematic, since they may react as an immediate action to a withdraw by moving their double movement rate in pursuit a limited amount of times per day, making them pernicious foes indeed. Worse, their horns may strike fear into the hearts of mortals and the most powerful see their companions turn into unseelie creatures (as per the new template also included). Rogues may now become whisky runners, experts of drunken boxing that may fuel their grapples and dirty tricks via the alcohol they consume.

Wilders (as per Dreamscarred Press’ superb Psionic Unleashed) may now take up the Cunning-folk’s method, netting allies temporary HP when surging and we also get to see a new Vitalist method (from the APG of Psionics, Psionics Expanded – an imho must-have book…): Gaining endorphin surge as a power, the Taseck is interesting indeed – upon transferring wounds, they grant the target a massive, but short-lived bonus to Str and Con, but leave the target fatigued after the initial rush has waned. An issue here is that the ability does not specify how the temporary hit points gained from the con-increase are handled: Akin to the barbarian’s rage? I assume so, for another cool option for the Taseck may trade powers for rage powers and use endorphin surge to enhance barbarians by letting them treat endorphin surge as their own rage. If you opt to choose rage powers, you don’t have to multiclass, btw. – they are available to you while in psychic frenzy  or under the effect of the signature power of this method.

The final new archetype would be the bog witch, a witch that replaces her familiar with a bog mummy, making her companion more powerful, but for the tradeoff of a higher risk of losing the mummy to fireballs, foes etc. After that, we get a new 5-level spanning prestige class, the Vate of Chiuta, who gets d8, up to +2 BAB, +2 fort- and ref-saves and +3 will as well as full divine spellcasting progression. These clerics may choose whether to channel positive or negative energy anew each day, breathe underwater and learn to automatically reincarnate and sense their bodies for 7 days- making it possible to potentially reclaim the original form. Dying anew within this time-frame, though, permanently ends the life of the Vate. Nice little PrC that lives very much from its great fluff.

We also get 4 new feats, all of which are interesting – what’s more exciting, at least for me, is the section on herbalism: 19 new herbs, complete with value, perception DCs to spot them, DCs to use them and side effects are covered – and I love them! From prolonging life to curing damage incurred by electrical attacks, duplicating eagle’s splendor or making the rejuvenation from fatigue faster, the herbalism-section is cool, oozes flair and just rocks!

Via 11 new spells, you may now gain a bird’s eye view, create seelie and unseelie henges to guard against aligned and summoned creatures and quicken natural HP-recovery, create mires or obscure a road. All in all, a nice, flavorful array of spells. 3 new magic items, 2 new psionic ioun stones, 3 new artifacts (one of which is actually a psionic tattoo – damn cool!) as well as 3 new psionic powers complete the deal before we get a massive array of equipment tables that not only cover Ultimate Equipment, but also the stellar Inkantations and Luven Lightfinger’s Gear and Weapon Shop before closing with two pages of cool, new mundane items.

Editing and formatting are good, though not perfect –  I noticed a couple of minor glitches here and there – nothing too glaring, though. Layout adheres to PDG’s printer-friendly two-column standard and the full color artworks are nice – especially since, at least to my knowledge, several of them are new. The pdf comes fully bookmarked with nested bookmarks for your convenience.

Let’s start with the bad – I don’t like the races – while not as broken as other races based on the ARG I recently reviewed and at least mostly balanced among themselves, they feel too powerful for me when compared to the core races. MacCool is a terrible name for a settlement and the new archetypes, with the exception of the vitalist method, didn’t really excite me that much.

On the plus-side, this pdf has a great map, interesting settlements, a flavorful PrC, cool spells, nice equipment both mundane and magical (though I wished we also got magical whiskeys in addition to the non-magical variants featured herein…) – and the excellent herbalism-section is a boon for my eyes. The archetype-sample NPCs are also a great innovation – I wished every archetype had such a sample creature – it would take a lot of number-crunching from DM-shoulders.

When I started analyzing this book, it first looked like I wouldn’t get warm with the Triarchy, but as a region with interesting and uncommon race dynamics, it works rather well and could easily be plugged into a given world. However, I still feel like the pdf falls flat of its own potential: Beyond the aforementioned complaints I can muster against it, I also feel that if this book had focused more on the fluff, the region, its cities, its flora, its produce – it could have been even better.

When rating this, I was rather stumped and didn’t really know what to settle on. In the end, I decided that the pros outweigh the cons, that the races, while not perfect, at least won’t break a game and that the great fluff, characters, statblocks and ideas contained herein still warrant a verdict in the upper echelons. hence my final verdict will clock in at 4 stars – with the caveat that those as picky with regards to race-balance as I am should consider themselves warned, though not warned away – spurning this pdf based on said grounds would imho be a mistake. Author Josh McCrowell has done a nice job and I look forward to reading more Porphyra-supplements by PDG.

You can get this supplement here on OBS and here on d20pfsrd.com!