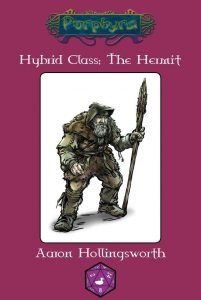 The hermit is a hybrid of witch and druid. The class gets d6 HD, 2 + Int skills per level, ½ BAB-progression, good Will-saves and proficiency with simple weapons. They are divine spellcasters that draw their spells from the druid and witch spell lists and uses Wisdom as governing attribute for spellcasting. They may not cast spells opposed to their alignment and they learn a few spells when leveling up; the hermit may also learn spells from other hermits and their spellcasting is intricately entwined with their lantern. This must be a source of illumination, though the precise form varies from hermit to hermit. The lantern can shine light like a bull’s eye lantern or hooded lantern and may be lit or extinguished as a swift action. It is not affected by environmental effects and requires no fuel. The lantern may be enhanced via item creation feats. Damaged lanterns regain full hit points next time the hermit rests and destroyed lanterns may be replaced. It has hardness 8 and ½ the hermit’s hit points. Lanterns act as divine focus and the hand holding it counts as unoccupied for the purpose of somatic components.

Okay, so far, so cool. Once a lantern is created, you choose one of 4 rune powers. The first expands the area of circular spell effects (cones, cylinders, etc.) as a swift/immediate action 3 + Wis-mod times per day, upgrading to +10 ft. at 10th level. I per se like this, but since RAW, the area of effect increase is total, not based on radius, it is a bit awkward – +2.5 feet radius makes for some off shapes. Making the increase based on radius would have been much more elegant. The second rune makes the lantern behave as a masterwork “light flail”, which can be temporarily enchanted with scaling bonuses, but no unique special weapon qualities. RAW, this bonus can also exceed the +5 cap, which is not how this type of thing usually works. This has a couple of issues. One: There is no “light flail” – it’s either “flail” or “heavy flail”. Or dire flail. Or flailpole. But not “light flail.” Two: RAW, the “light” flail (i.e. the non-heavy one) is a martial weapon, for which the hermit has no proficiency. The next rune grants an untyped, scaling bonus to all saves for allies in the light. It lacks an activation action. The final rune is the inverse, debuff version – but it’s missing its activation action as well.

2nd level nets endurance, 3rd level nets “withdraw” (not the smartest choice for the ability, considering the withdraw action), which acts as 3 + Wis-mod sanctuary per day, with ½ CL added to the DC (WUT??) It also nets + Wisdom mod AC when using the ability. 9th level nets commune as a supernatural variant, with 13th and 17th level increasing the number of questions he can answer per day. At 1st and 2nd level and every even level thereafter, the hermit gets to choose an illumination, which are governed by Int, and which include a +4 Disguise and Bluff bonus to pass off as older, a thousand faces starting at 14th level. There is an illumination that adds the Wisdom modifier a second time to AC when using withdraw. Cool: Getting a bonus to saves versus breathable hazards via filtering, unkempt hair. Weird: The internal balance of these can come off as strange. There is one illumination that nets +1/2 class level to Sense Motive, Diplomacy and Knowledge check DC to learn about the hermit; there also is one that nets +2 to two skills. Another illumination nets new spells or a metamagic bonus feat or a limited array of witch hexes. Immunities are properly situated behind sufficient levels. Weird: Adding 1d4 piercing damage to touch attacks. That’s not how fingernails or the like usually work in PFRPG. All in all, some cool visuals, but also some guffaws. The selection could be longer as well, considering the amount of illuminations the class gets.

The capstone allows the class to expend a spellslot as a swift or immediate action to grant herself a bonus equal to the spell’s level to a Wisdom-based check. The capstone also nets permanent true seeing and sight in perfect darkness. The pdf includes 4 class feats: Additional illumination does what it says on the tin. Become the Dim World nets 50% concealment when using the withdraw class feature, further adding to the vast power of that trick. Born on a Monday nets +2 to social interactions with fey and increases starting attitude to indifferent or better. Legacy of Diogenes sounds cool, but, alas, does not really represent one of the famous exploits of the man, but jus represents a numeric escalation.

Nice: We get a list of magical illumination sources as well as a magic lantern that nets detect illusion once per day and once per night. It also is utterly broken: The limited spellcasting of the class regarding availability is removed here – this one makes the WHOLE spell-lists of druid and witch available. For less than 10K price. Either stick to the limit, or don’t. An item should not be practically required/so good it MUST be taken by every hermit. The pdf closes with a massive list of favored class options, which cover the core races, less common ones and Porphyran races. There is some overlap between the individual FCOs and they vary in usefulness – more spells or withdraw-duration, for example, are more potent than other tricks here.

The pdf comes with a bonus file that includes the CR 5 Chingatrüll, which was also featured in Monstrous Bloodlines for Sorcerers V.

Editing and formatting are pretty good on a formal level. On a rules-language level, the class has some issues in the design. Not to the extent where it becomes unusable, but to an extent where it becomes problematic. Layout adheres to a 1-column b/w-standard with purple highlights. The pdf has no interior artworks apart from the cover. The pdf comes fully bookmarked for your convenience.

Aaron Hollingworth’s Hermit has the makings of a cool class. The idea here is strong – the old hermit, with ragged hair and lantern illuminating, quite literally, the dark in the world….or luring it. I *like* the theme here. While the withdraw-DC-increase is overkill, it’s limited in its uses, so that’s a plus of sorts. That being said, the hermit could have really used more unique illuminations. Similarly, the lantern BEGS to be used to modify the area of effect of spells and hexes and abilities – instead, it amounts to an object-familiar-substitute. Speaking of objects – the magic lantern that delimits the balancing factor for the spell-list flexibility of the class should die in a blaze. This one is frustrating, fr it has the potential to become outstanding – the spell-engine is interesting and the lantern-idea, half-implemented though it may be, could carry so much more. I can’t rate that potential, though. Hence, my final verdict will clock in at 2.5 stars, rounded up for the purpose of this platform.