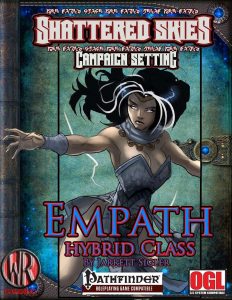 This hybrid class clocks in at 14 pages, 1 page front cover, 1 page editorial, 2 pages of SRD, 1 page back cover, leaving us with 9 pages of content, so let’s take a look!

The empath is a hybrid class of cleric and psychic, who receives d6 HD, 4 + Int-mod skills per level, proficiency with simple weapons as well as light and medium armor. At 1st level, they may, as a standard action, cast analyze aura (not properly italicized) at-will to see emotional auras – this is supernatural, which is weird to me, but okay. The empath gains knacks and casts psychic spells of up to 9th level, governed by Wisdom (attribute not properly capitalized -a problem throughout the file) and draws spells from its own custom spell-list. at 2nd level and every even level after that, the class may replace an empath spell known with a cleric or psychic spell.

At 2nd level, the class gets deep bond – as a standard action, the empath may touch a living being to form a bond that lasts one minute. While this is in effect, the target may use the higher of the empath’s saves or his own. Slightly rules-wise redundant: “At the start of the empath’s turn, as a full-round action, the empath may heal the bonded target 1d6 hit points. This increases by a “d6” (should be +1d6) at 4th level and every even level after that, capping at 18th level. This can be used 3 + Cha-mod times per day and only one bond may be in effect.

Every empath chooses an emotional sensitivity, which nets abilities at 1st, 5th 10th and 15th level and also determines the capstone – basically the discipline analogue. a total of 7 such sensitivities are provided, the first of which would be anger, which yields a short-term buff, an improperly codified, wonky bite attack that instills rage, +2 Str and Con for the bonded target at at-will full-round calm emotions. The capstone is cool: Anyone affected by rage or with a rage power or spell with it in the name can be dominated as a standard action. Makes sense to me! However, it should be noted that the capstone name is different in table and actual abilities – that should have been caught in editing.

Awe has a pretty cool basic ability: Dazzle foes briefly (sucky, I know!), but the enemies lose readied or delayed actions. Interesting! 5th level presents the option to negate a selection of negative conditions suffered by the bonded creature. Gaze-based condition sharing, rerolls for saves of allies and a capstone that may render foes flat-footed collectively make this one really nice. Courage provides a scaling Will-save bonus, AoE, versus fear, reflexive second saves versus fear and at 15th level, 60 ft. perfect flight for allies while charging (only for the charge). This IS pretty cool – but RAW doesn’t work. It is activated as a swift action and targets a charging ally – it should be activated as an immediate action. Swift actions can’t be used outside of a character’s turn. 15th level yields the temporary doubling of morale bonuses, once per deep bond and the capstone provides a series of passive upgrades that conspire for an all-around more potent nexus.

The desire sensitivity has a gaze that penalizes Sense Motive (not properly capitalized) and lacks a durationThe 5th level allows for the expenditure of unused spell slots to buff social skills greatly, but fails to specify the spell slot required – 9th level spell slots are RAW worth as much as 1st level spell slots. 10th level yields at-will suggestion (which, being Su, should note activation action) and 15th level yields a short-term dominate. 20th level allows for the learning of a creature’s desires via prolonged concentration. Despair allows for the decreasing of fear-based conditions, 5th level allows per the absorption of morale penalties, and 10th level provides a nice debuff with a hex-anti-abuse-caveat, a means that also balances the slow 15th level ability. The latter lacks an activation action The capstone provides serious benefits when nearby creatures are affected by fear-conditions.

The euphoria sensitivity nets an at-will AoE polypurpose panacea, which is overkill for 1st level; 10th level yields limited daily uses of haste (erroneously capitalized) and 15th level provides a buff that last 1 round as a full-round action – which is comparatively weak at that level. As a capstone, the empath gets euphoria-inducing skin with a no-save daze that kicks in when hit by natural attacks or unarmed strikes and it can also be used as a touch attack. Interesting! Finally, the horror sensitivity provides an Intimidate-enhancer, immunity to fear to the deep bonded target at 5th level,, a 30-ft. fear aura at 10th level that can be projected on allies and, at 20th level, an empath may, as an immediate action, consume a creature’s fear, gaining a powerful buff. Okay, what’s the range?

The pdf also sports archetypes: The central mind replaces emotional sensitivity and emotive master with a kind of mental communication, which, at 10th level, may transfer touch spells…okay, does the character still have to hit with touch attacks? Instead of deep bond, they may place nodes as a full-round action of a creature. Creatures with nodes can’t be surprised unless all creatures with nodes are surprised. Hit points may be transferred via such nodes by the character as a standard action. The character can place nodes equal to 1 + Wisdom modifier for every two levels – which allows for ridiculously huge networks that are basically undefeatable. Not a fan, as this basically demands being cheesed.

Instead of emotional sensitivity, the instinctual driver can treat creatures as humanoid for the purpose of spells and effects, with higher levels yielding charms versus such creatures at decreasing actions required. Spells are not italicized here and the 15th level ability refers to dominate and charm interchangeably, which THEY ARE NOT. This one’s a mess.

The sensorial replaces deep bond may enhance senses of creatures, increasing the potency of the granted abilities at 5th level and every 5 levels thereafter. Pretty interesting, though one of the sub-abilities lacks the italicization of its sub-ability header. The final archetype would be the sycophant of pain – these guys can grant temporary hit points to allies, but nauseate them. This generates pain points, of which a maximum of class level + Cha mod may be held. These may be expended to deal no-save damage to nearby enemies – the damage is untyped and imho shouldn’t be. The affected number of allies and temporary hit points scale, obviously. Weird: This replaces the capstone without giving anything back. Instead of deep bonds, these fellows gain the wounding well ability, a debuff bond that imposes massive penalties…but the creature affected may end this effect by taking damage. Interesting alternative to deep bond.

Editing and formatting, the latter in particular, are the bane of this pdf. There are a ton of formatting glitches. The rules-language is better than usual for these hybrid classes, but still could have seriously used a rules-dev – there are quite a bunch of finer points in the rules-language not working properly and missing activation actions and a couple (but not many) balance-concerns here and there. The layout adheres to a nice two-column full-color standard and the pdf has nice full-color artworks. The lack of bookmarks is annoying; just as annoying would be the fact that the book has copying and highlighting of text disabled, which is supremely asinine when trying to e.g. copy abilities to a char-sheet.

Jarrett Sigler’s Empath ranks as one of my favorite Wayward Rogues Publishing classes so far: While it has issues in editing and formatting, the issues are significantly less pronounced than with other classes. Unfortunately, the rules-hiccups that should have been caught in editing extend to components that affect functionality. At the same time, the class does feature actually unique options and has some really nice ideas. If you’re willing to work a bit with this, then it can be considered a worthwhile offering. If this gets fixed, it certainly has the potential for 4 or even 5 stars…but with the accumulated flaws and comfort-detriments, I can’t rate this higher than 3 stars.