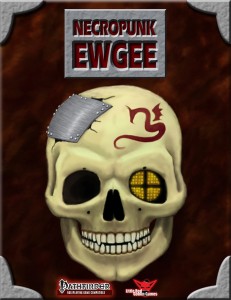 This sourcebook for Little Red Goblin Games’ glorious, innovative Scifi-setting clocks in at 41 pages, 1 page front cover, 1 page editorial, 2 pages of SRD, leaving us with 37 pages of content, so let’s take a look, shall we?

We kick off this pdf in style, with a fully-depicted Battle-march for the Sentinels – “O, Death”. And yes, I tried singing it and it does work, cadence-wise. We hence kick off this pdf’s coverage of the Ewgee with a survey of the sentinel organization – from ranks in the military, to training and even including their oath, this one oozes flair and style.

The Psychic rules of Necropunk also get suppelmental information here, with the Psyoff. While nomenclature may sound none too impressive here, these guys essentially generate a tactical grid, in which allies can share senses, memories and even have PPI assigned to them – the storytelling potential, beyond the combat potential, for this one is vast. And yes, entering the mind of hostiles and talking to them, soothing golems – possible. A power is also tied to the new crown of god weapon, which can be made to fire lines and yes, bursts.

The Living Saints of the (in my opinion) somewhat creepy Prime Bloodline get a wildcard archetype that gets a free perfection at 1st level and may spend potential points on a number of unique Perfections -essentially, their potential is more geared towards becoming an Übermensch – enhanced immune systems, perfect immune systems, eidetic memory, truly superb vision, including the option to see e.g. x-rays and similar usually invisible forms of radiation and spectrums. Nice, even though an explicit mention of “this modifies Genius” etc. would have made the archetype somewhat easier to use. Sentinels of the Prime Bloodline may opt for the new Father archetype, which represents veterans of countless battles fought, with arrays of tricks that allow them to provide combat support to allies – think teamwork-enhancing commander. Solid one.

Sisters are the immaculate seductresses of the Prime Bloodline – while sterile, these wildcards can adopt personas – adopting these allows her to e.g. borrow the diplomat’s social competence, sneak attack and trap sense, bombs, monks etc. – cool idea for a jack-of-all-trades-class that actually has a distinct fluff, if not perfect balance between personas.

Engineer-members of the Necromancer’s Guild may become Devs -addicted to change exists here as well as gaining a retractable tendril that can grapple foes, may biohack others and also get to choose from an array of controlled bio-mutations that allow you to hyperstimulate allies with your tendril, deliver poison etc. Phagen of the assassin’s guild provide a cool dichotomy – they’ve got the license to kill and extract the problematic elements from the Necromancer’s Guild.They also recieve a kind of pet ghoul slave made from a convicted serial killer that they can unleash on their foes and upgrade over the levels via body mods – powerful and something for everyone who wanted a summoner-style class for Necropunk – with the conundrums we’ve come to expect from the setting. No less than 13 new body mods, from doll skin to grappling rocket fists, frog skins, skin that can see, detachable eyeballs – the amount of strange options is cool and awesome and the potential complications reflect that.

What about a disc that can heighten bad moods and interrupt sleep? (I guess I have one of those implanted into my neocortex…). Beyond these, we are introduced to 10 exile shards, three of which come with their own racial stat modifications, one with an alternate racial trait and teh Gravs, born and bred for space, being particularly adept in Zero-G-environments – including two new armors/suits and a new weapon/tool.

While primitive in comparison, the gunslinger archetype space cowboy will find its fans among Cowboy Bebop fans, with a vehicle to represent the nomadic ways of the class being sponsored in the beginning – though, as fans of Firefly or said Anime may attest, these things may break down…

We also are introduced to the assassin’s guild’s tomb foot style and its 4 follow-up feats, one of which ought to point out whether the bonus it grants also extends to potential AoOs, but apart from that, an interesting, defensive style. If a sister chooses, she can learn the psychotic Bathory persona, which not only may sever limbs and is a deadly combatant, but also simply…dangerous. Familiarity with bioskins, improved awareness and control of one’s body – solid feats here. We also get three cool new campaign traits – one that represents being in service to the planetary defense force and one *I’d* choose – unchecked ambition in the Byronian sense. And there would also be an antiquated sense of honor, from which I probably irl also suffer – so much roleplaying potential in these and solid benefits as well.

Engineers may learn a nigh perfect sense of time or a kind of echolocation that helps in total darkness, Magpies may learn to change minimum damage to maximum damage, Stalkers may use skills instead of teh steal maneuver in combat to deprive foes of their tools.

Finally, the linguist in em rejoices as we’re introduced to the language of money as well as see Esperanto enter the fray and a total of 5 new dialects.

Editing and formatting are this book’s weaknesses – the sourcebook sports quite a few bolding-glitches and minor formatting issues and minor rules-editing issues, though never grievous ones, can also be found herein. Layout adheres to Necropunk’s simple, relatively printer-friendly b/w-2-column standard and the interior artwork deserves special mention: Don’t be fooled by the cover, seriously, the b/w-line-drawings herein are plenty, gorgeous and downright awesome. This is a beautiful book on the inside! The book also comes fully bookmarked with extensive, nested bookmarks.

Okay, let me get one thing straight from the get-go – the crunch herein is good, but not always perfect – designers Scott Gladstein, Caleb Alysworth, Jeremiah Zerby and Dayton Johnson have overall done a good job, but at least for me, Necropunk was never about playing the “I got better crunch than you”-game. Necropunk is about the setting, the ideas – much like an alien-less, thinking man’s Warhammer 40K, it is a dark vision of the future, but not a grim one. Nor is it a rip-off, it has its own, distinct identity that appeals greatly to me, because it’s for once a scifi setting that is not illogical or been there, done that. It’s innovative.

The questions posed by each class, the conundrus, they are alive and the base campaign setting provided more ideas to me for any campaign than just about all campaign settings I’ve read in a while. This sourcebook proudly follows in that tradition by creating more content, more information, more philosophical questions to explore via classes and playstyles, should you choose to. Necropunk is about ROLEplaying with a heavy emphasis on the ROLEplaying – more so than just about all Pathfinder settings. The ideas herein – they are simply brilliant. The sisters with their personas, the serial killer-enslaving assassin that may end up on the other end of the leash – these are concepts so glorious, so exciting to explore, that I was grinning from ear to ear. Yes, this book may not be perfect, but it incites the imagination in glorious ways. Usually, I’d rate this down further for its avoidable glitches here and there, but after much deliberation, I can’t ever justify this – the Ewgee sourcebook is too rich in ideas you can scavenge even if you don’t use the necropunk setting. There are too many cool concepts herein. My final verdict will clock in at 4.5 stars, rounded up to 5 for the purpose of this platform. Here’s to hoping we’ll see much, much more Necropunk in the years to come – this has all the makings of a cult setting in the making.

You can get this inspiring source book here on OBS!