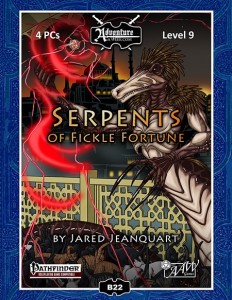 This module clock in at 34 pages, 1 page front cover, 1 page ToC/editorial, 1 page SRD and 1 page back cover, leaving us with 30 pages of content, so let’s check this out!

Still here? All right! There once was a time when most mega-modules sported some sort of artifact on which the story hinged – a practice that has since then become less common. Well, here we have a module that draws upon these venerable tropes – and an interesting artifact, with the Knucklebones of Fickle Fortune. The city of Arefast is about to become much more interesting – for unbeknown to most mortals (and immortals, for that matter), the knucklebones of fickle fortune receive a background story of rather interesting repercussions herein – the gravitas of which the PCs are bound to find out when they are about to confront the composer-turned-crimelord Sir Joffrey Curwen – who has recently “acquired” just such a knucklebone. Whether because he’s also stolen something the PCs require or due to some other hook (plenty of which are provided), the module begins pretty fluently with a confrontation of the crimelord in his abandoned, dilapidated theatre-hideout – which btw. sports a surprising tactical depth and interesting hazards – as well as a gorgeous full-color map, presented both for DMs and players.

During the combat, someone, potentially even the PCs, may be the ones to roll the d20 – and score a 21. Not all is well with the forces of universal law, as the sabotaged artifact allows an array of voidworms (including the powerful protean mastermind) to enter the city – and fittingly, chaos breaks loose. In an explosion of chaotic light, the serpentine masters of chaos disperse and take with them the artifact – and that is only the beginning. With a valid rip in reality, warpwaves with significant and creative influences blast through the city with partially even funny consequences:

Whether it is chaotic weasels that refuse to attack female characters, a fullblown caturday of all cats taking to the streets in vast swarms – so what to do? Best get in contact with the knucklebone’s former owner, who is just as stumped, but asks the PCs…well…to roll the thing again. Alas, for that, they must have the die and first avoid being slain in the instigated collapse/assassination attempt on the cross-shaped bridge of their meeting. The former owner Huronir thereafter contacts the PCs via sending-spells (including hilarious complaints about the spell’s word-limit…) and sooner or later, Curwen, should he survive, will make his move….and if he doesn’t, a nod to Mike Myler’s cult kobold-whistleblower Weaky Leeks might help… Rather interesting – the opposition is not sleeping and acting upon the capacities one expects from smart foes – like tracking the buyer’s market for axiomatic weapons available in the city and systematically eradicating the magic items designed to stop them. On the plus-side, this allows a DM exceedingly easy control over what weapons to provide for the PCs as they hopefully prevent the destruction of the magical items.

While all of this may sound incredibly urgent, the tempo is defined by the PCs and aforementioned warpwaves and odd occurences should drive home a sense of urgency – even before the PCs realize that their triumphes are short-lived when the knucklebone isn’t destroyed – the vanquished proteans may simply re-enter the city after a brief reformation period of a couple of days, allowing for yet another hidden means for the DM to increase or decrease the difficulty on the fly. Have I mentioned the option to enjoy a playful duel to the death for the protean’s amusement with the reprogrammed clockwork soldiers of the town’s square, featuring the confidently-named “Slaughterlord”? While all of this is going on, the PCs are collecting fragments – which they can use via e.g. locate object to seek out the climax and true location of the knucklebone. Nice to see some awareness for the capabilities of higher level PCs.

In order to end the chaotic fluxes, the PCs will have to enter the city’s progressive civic timepiece, a massive clock-tower (provided in a stunning full-color map!), and make their way past corrupted inveitables and the last of the protean incursion – the former while being mocked for their oh-so-efficient axiomatic weaponry. Hilarious! Oh, and btw., much like many encounters, tactically smart PCs are required – the final boss, much like most encounters herein, can be considered a kind of puzzle – the smarter your players act, the better – and in the end, they may refute the protean’s “freedom” by making an offering to the die. Oh, and proteans are chaotic, not evil – even if slain, the proteans may actually raise the PCs from the dead since they were so amusing. (Which btw. also reflects in the read-aloud text, which is delightfully belittling to those stubborn hominids…)

The module also provides a small, two-page mini-gazetteer of Arefast, a new type of protean, rules for the fragments/less knucklebones of fickle fortune and, as mentioned, player-friendly maps.

Editing and formatting are very good – I noticed nothing more serious than missing blank spaces. Layout adheres to a gorgeous,e asy-to-read standard and comes with ample original full-color art. The pdf comes fully bookmarked for your convenience.

Jared Jeanquart delivers one glorious module here – suffused with a subtle sense of humor (which you can ignore, should you choose to), ample suggestions for modification by the DM. The opposition is, befitting of their nature, playful and oscillating between the ridiculous and the amoral. The module’s internal “logic”, scoff at the adversaries may at that term, is much more concise than in most modules you can get, the means for expansion vast. Arefast as a city is an inspired backdrop as well – and had me, quite frankly, stoked for more. My one complaint for this great module is that I want to know more about this interesting city and its unique locations and personalities! This is the first module by Mr. Jeanquart I’ve read and it has me asking for more – this is fun, exciting, has interesting and smart encounters and features foes that have too long waited for their chance to shine – final verdict? 5 stars + seal of approval.