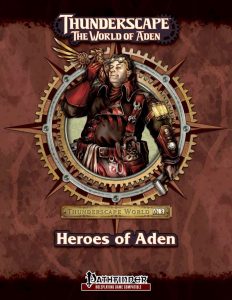 This supplement clocks in at 16 pages, 1 page front cover, 1 page back cover, 1 page editorial, 1 page ToC, 1 page SRD, leaving us with 11 pages of content, so let’s take a look!

So, what is this? Well, functionally, this is a collection of NPC allies with statblocks included. They are the named variety, so not the generic everyman’s statblocks, and the individuals make ample use of Thunderscape’s class array; if required, for example when a thaumaturge is concerned, we have the stats modified by the typically-channeled legend featured in brackets, with spirit points properly noted. Similarly, more complex rules operations are noted in brackets, which can be handy for some less experienced GMs.

We begin with Corbin Clark, who may be of Kuzark stock, though his name is that of an Arasteen native; he oddly is a staunch enemy of the concept of a rewarding life after death, but still is an ardent enemy of the wicked – a position I can relate to, and one rarely seen in TTRPG-products. Rules-wise, he is a fighter2/thaumaturge 4. Aforementioned use of brackets is somewhat inconsistent here, with the senses line noting a Perception of +8, which is the value provided for the legend; this extends to all such characters using thaumaturge legends, just fyi. The statblock is per se nice, but sports errors, like an incorrect initiative value and the magical shortswords not in proper italics in the offense section.

Next up would be Daevid, an echo bard 5/thaumaturge 4 (who ALSO draws on the warrior legend as a default), bereaved of his paladin love; a solid tragic hero. Davan Campos’ bloodline hails back to the  first Lord Protector of the Mistland Republic, he is an exceptionally driven and capable captain, a steamwright 18 who gets a new trait that allows for halved size for non-combat starting inventions. Kaera, Sorceress of the Free Cities, is at this point one of the most powerful benevolent protectors of the Coolwave Coast. Mechanically, she is a rogue 3/sorcerer 15, and while liked her background, her statblock lacks the HD lists, her AC similarly lacks the breakdown of how it’s calculated, her feats are lower case, her statblocks lists her iterative attacks, and her, build, as a whole, is VERY unfocused;  at her level, she is rather ill-prepared to face her appropriate challenges.

Magnus Arcane’s name, before you groan, is indeed a pseudonym, and the somewhat odd black sheep of the family, he’s taken to magic. His statblock (he is a universalist wizard 11) is btw. also missing HD-breakdown, AC bonus key, etc. Marek Celdyrm a level 8 thaumaturge, does not have this issue and lists the like properly. He is also drawing upon a different legend – protector, this time around; Marek is hunting a necromancer, seeking to end the family curse.  Michiko the Fox, an elven ninja, gets a ninja trick that lets her spend 1 point of ki to gain scent for 10 minutes, which is neat, but no activation action is provided; that should probably be free. Ridiculous: Know what scent helps most? Yea, noticing stuff and  tracking. Michiko has not a single rank of Survival. Her list of ninja tricks is also missing this one, and her CMD is listed as “+20”. Her weapon is incorrectly called “katana of frost” instead of frost katana, among other issues.

A mechamage of remarkable skill, Mykal the Toymaker is the lavishly-illustrated fellow on the cover, and being a friend of the fellow (a new trait that is not properly classified by trait type) makes a beginning golmeoid implant masterwork. It is odd, then, that such a potent fellow only ranks at 7 class levels. Odder still: While he comes with a doll golem, the text also mentions his dollhouse, a mobile manor house that can fit into a 30-foot-square, with rotating cannon-platforms. No, that’s NOT the doll golem. Yes, the issues in the statblocks are here as well, with CMD, among other things, being off. I really don’t get why the exceedingly cool Dollhouse wasn’t statted properly.

Nikkos Moran is fighter 5 who uses a single shortsword, not kidding; his CMB and CMD are also wrong. Most amateur players can make a better fighter. Ophelia Mimina is a bard 12 focusing on casting (no magic weapon, all defense) who erroneously lists her CMD as 13. Reinn is a fighter 3/ranger 5 multiclass, and is essentially described as a lone wanderer over whom little is known. The final NPC is Taela Dragonstar, a sorcerer 4 with the draconic bloodline, with 4 qinggong monk levels and 2 seer levels thrown in; is her build impressive when compared to what shows u at my table? Not really, but she is leagues better than  the majority of NPCs herein, and she feels like a character that could kinda happen in a game where the player focuses on making the development of the character based primarily on the story.

The pdf ends with some general advice on handling NPCs and a brief campaign framework of PCs as pseudo law enforcers in Mekanus.

Editing and formatting are not good on a formal or rules-language level; I noticed too many discrepancies and hiccups that influence the rules. Layout adheres to the series’ two-column full-color standard, and the pdf sports a really neat full-color artwork. The pdf has no bookmarks, which is a comfort detriment.

The different design skills of Shawn Carman, Chris Camarata, Rob Drake and Rich Wulf are, alas, on full display here: There are a few NPCs I’d consider to be worth introducing, but from the formal hiccups to the build validity on the characters featured herein, the supplement is highly inconsistent on a mechanical level. This tendency, alas, extends to the stories as well, which range from captivating and interesting to utterly bland; unfortunately, cool complex and good builds don’t necessarily correlate in the supplement, which renders recommending this something I simply can’t do. This is not the worst NPC book I’ve seen, but it is a long shot from being fully functional or something I’d recommend to a discerning GM. My final verdict can’t exceed 2.5 stars, rounded down.

Missed Thunderscape? You can find the setting here on OBS.