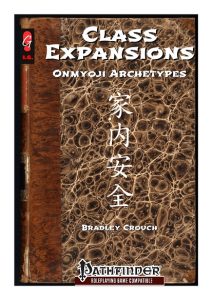 This inexpensive expansion for the superb Onmyōji-class clocks in at 4 pages, 1 page front cover, 1 page SRD, leaving us with two pages for the archetypes, so let’s take a look!

The first of the archetypes (both of which sport a brief paragraph of well-written fluff, just fyi) would be the Grinning Fox. Instead of aid of the minor kami ability, these fellows may choose an at-will cantrip and an at-will orison each day. Additionally, at 1st level, these guys get the Cha-based SP to cast lesser confusion twice a day…and grow their first fox tail, from now on counting as kitsune for purposes of e.g. the Magical Tail feat. The grinning fox receives spirit points equal to his class level plus Charisma modifier and replenishes these after 8 hours rest/meditation. At 2nd level, instead of gaining a shikigami, these folks gain Magical Tail as a bonus feat for the first time, gaining the feat an additional time every 2 levels thereafter. If the grinning fox already has the feat 8 times, he may instead choose one SP granted by it and increase daily uses for said SP by +1. I really like this archetype – in less “magical” worlds, this allows a player to undergo basically a kitsune-like apotheosis without introducing the race, while in high fantasy campaigns, it adds an interesting dimension to the interaction with kitsune: Do they frown upon Grinning Foxes? Encourage them? Perhaps even create them? Nice one!

The second archetype would be more complex – the Herald of the Lucky God. These guys exclusively specialize on one of the lucky gods – the lucky gods are listed including their dominions, but here’s the catch – you get the petition of the lucky god you have chosen as a bonus petition as soon as you meet the prerequisites…however, you may never learn the petitions of the other lucky gods. Similarly, whenever the herald gains a class level and meets the prerequisites for the friendship feat associated with the chosen lucky god, he automatically receives it – once again, gods and associated friendship feats are listed for your convenience. This ability replaces aid of the minor kami. The archetype also learns an unique trick: At 3rd level, the herald learns the so-called Lucky God’s Cantrip of the associated deity – and no, this is no 0-level spell. Instead, the abilities are either extraordinary or supernatural abilities, The abilities generally fit rather well with the respective theme of the lucky god chosen: Benzaiten, for example, grants all Knowledge skills as class skills and allows for untrained use of them. Daikokuten gets a pocket dimension that can hold one object of up to 5 lbs. (Hammerspace!), while e.g. Bishamonten grants an insight bonus to atk and AC when readying an action that is then wasted. While I’d champion a scaling bonus for the latter, you see that the abilities are pretty creative! Have I mentioned “Frequent Dier” that pays for a part of the costs of the spells that returned the character to life? If you’re a DM like me, this will be used OFTEN. And yes, this got a chuckle out of me.

Editing and formatting are top-notch – I noticed no glitches. Layout adheres to Interjection Games’ two-column b/w-standard and the pdf provides stock photography of a rendition of the lucky gods, fitting exceedingly well. The pdf has no bookmarks, but frankly, needs none at this length.

So Alexander Augunas obviously had to sneak a kitsune-themed…wait. Wrong company and author, so sorry! ;P

Kidding aside, Bradley Crouch’s expansion of the absolutely SUPERB, brilliant, genius, awesome, buy it now-level of greatness onmyōji-class is short, sweet and to the point. For a single buck, you get two well-made archetypes that certainly enrich the game and add new dimensions to the glorious base class. While I’m not completely blown out of the water by this expansion, it is still an excellent addition, which, at the ridiculously low $1-pricetag, is a no-brainer. MY final verdict will clock in at 5 stars.

You can get this great pdf here on OBS and here on d20pfsrd.com’s shop!

If you like Bradley’s work, you can support him (and get behind the scenes info, a discount on new releases and even have him design your material!) here on his patreon!
Endzeitgeist out.