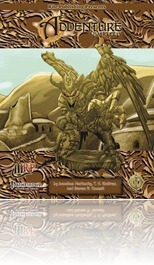 This being a review of an adventure-based magazine, the following contains SPOILERS. Potential players may wish to jump to the conclusion.

All right, still here? Excellent! The first module is a slight blast from the past for me – we get the complete first level of the Ruins Perilous by Jonathan McAnulty of Kaidan and Coliseum Morpheuon-fame. Once a project with an experimental funding system, the project has been dormant for some time, which as a pity: The Ruins Perilous are located next to Questhaven, Rite Publishing’s upcoming magical renaissance city governed by adventurers and the Ruins are not only a mega-dungeon, but also a kind of proving ground: Cleared by the first adventurers of the Questor’s Society, each level of the Ruins includes a Guild-Forge, where the emblematic rings that denote rank in the society can be upgraded, making exploration of the dungeon one of the ways to enhance your standing in the Questor’s Society.

AQ #2 includes the complete first level, released for the very first time in its entirety. With adventurers exploring the place, it needs a care-taker to remain a challenge and there indeed is one: Carcera, a dungeon dragon, takes care that vanquished foes are replaced and also monitors and modifies this artificially maintained dungeon environment – but each replacement takes some time. And should the PCs die, their corpses will be hauled back by Ciicul, Stonewarden the cynical groundskeeper gargoyle for proper burial. The first level of the Ruins Perilous turns out to thus have a rather interesting feeling, being something different in tone from your standard dungeon, which becomes readily apparent when the first creatures they fight turn out to be shivs, carnivorous green lizard that are quickly followed on by encounters with the first traps, a lesser ghostly shadow, giant porcupines, a junk elemental and an interesting, mysterious set of fountains, the transcription of which should elude the PCs due to the high DC, at least for now. PCs also have a chance to be squashed by logs, combat a mirror assassin and meet a tribe of thievish pilfer monkeys seeking to take their shiny baubles, equipment etc. Among the more far-out beings, once can encounter a 2-headed dire shadow rat, skeletal guardians made of smoke and vermin like giant ticks etc. Rather disturbing, the PCs can also find a rather nasty fungus that has created some fungal spider zombies.

In order to advance to level 2, though, they will first have to defeat ratfolk sentinels spying for their allies on level two, explore a garden of self-combusting flowers and a rather unpleasant amount of poisonous blue cave frogs before passing the guild forge and its guardian and venturing to level 2, which I hope to see in the next installment of AQ!

The module also features 3 new magic items, 6 new monsters, the full stats of Ciicul and 4 different pregens, all of which utilize some of the neat racial supplements by Rite Publishing.

The second module is T. H. Gulliver’s “Into the Land of Tombs”, a tantalizing locale first featured in the stellar “#30 Traps for Tombs”, which to this day remains the best trap-book available for PFRPG. The once verdant land was beset by a dread cataclysm that ensured the gradual transformation of the land’s culture – now a wasteland of tombs, people still shiver at the potential return of the Necromancer-Pharao Nukramajin – a detailed background along DCs etc. is provided for the PCs to unearth. When the nephew of Ayser Ayman died, the funeral procession set off towards the family crypt, guarded from the roaming undead by a magical crypt key – only to be attacked and almost wiped out by attackers, who took Hafa Ayman hostage. It is here the PCs come in: They have to journey to the land of tombs, without a crypt key, and return Ayser’s sister to him. After a short interrogation of the surviving guard, the PCs will be off towards the place of the ambush where the bodies have recently been gnawed on and thus, the PCs can immediately make themselves a picture on how cowardly the guardsman truly is – as soon as a pack of sand ghasts breaks loose from the desert to add the PCs to the festering pile of bodies.

Now, after that, the awesomeness begins with a undead gunslinger Askari harassing the PCs and making for a truly unsettling encounter -whether diplomatic or combat-themed. After that, the PCs will sooner or later stumble upon the now undead funeral procession of Ayser’s deceased nephew and have a chance to rescue Hafa Ayman, who has been locked up in the sarcophagus of her son. The mastermind, though has gone ahead to the family’s crypt. Bringing the remains there, they can encounter the wizard Sekani Omari, who was after the crypt key to gain access to the family tomb – to find the legendary tomb of Nukramajin. He only got a cryptic prophecy, though, which might make for an awesome future module. Better yet, if you need an added complications in the show-down, you may add a new creature, the so-called Red Jester, which can be considered a truly deadly undead jester that was amused by the irony of the undead procession.

The high level module of this installment is Steven D. Russell’s “Dungeon of No Return”, which could e considered a nod towards the “Tomb Of Horrors”. If the name was not ample clue: PCs will DIE here. In order to resurrect a legendary hero of old, the PCs need to reclaim a gem of power called the Quietus Starlight and are hired to enter the dungeon of no return, to once again stop the now reincarnated fey deity of autumn. The gem is a soul-prison, yes, but an insidious one – the hero of old doesn’t want to leave it, for it is a true paradise and thus has created an order of powerful beings to ensure he is never disturbed – it is into this death-trap of a complex, against this hero’s allies the PCs will have to march to rip the legend of old from his self-chosen complacency. Much like “Down the Rabbit Hole”, this is a five-room dungeon, with each room containing some kind of deadly challenge the will not only require good rolls and builds, but also wits on part of the players to weather. And boy, does this module not pull any punches: After teleporting to the first room (via a carpet, probably), the PCs can imemdiately fall prey to a powerful illusion of “Dawning of the Wildstar”, legendary blade of Rualsnis the Wyrd-smith and not only have fun with a deadly destruction spell, but also with a…balor. In room 1. Yeah. Ouch. However, if the PCs “get” a respective room and solve it without triggering its prohibition etc., they’ll be rewarded quite generously in each of the rooms.

Speaking of ouch: A rainbow wall looks bad. A path into a side-room that turns out to be the path into the massive maw of a petrified gigantean hero-killer remorhaz Raze-Ruse(CR 25), though? PAIN. Worse, the insides of the petrified beast are dimensionally locked, making for easily very dead PCs. Speaking of dead – room 3 houses a crucifixion spirit as well as exemplar mudmen. How better, though to pass the time before the dragon’s lair than with a nice game of wheel of fortune? Guarded by an adamantine cannon golem that can practically not be defeated unless very specific conditions are met and an ironborn luckbringer, the PCs get a chance to play at the wheel-equivalent of a deck of many things, with a whopping 100 different results. Though, after an initial success, the luckbringer uses his powers to foul the PC’s agenda and ensure the powerful curses befall them. (Btw.: all rules to properly play the luckbringer are depicted) In the final room, hidden by an illusion, waits the perhaps deadliest beast of all – a rival adventurer group of highest level, commanded by the hobgoblin brute Kraulog. His allies include a goblin rogue, a drow cleric and a fighter/evoker that come, as most builds herein, with multiple feats, magical item qualities, arcane discoveries or uncommon spells.

The pdf also features a massive 100-entries table of generic dungeon dressing features by Raging Swan mastermind Creighton Broadhurst as well as a short 2-page article I really enjoyed by Robert N. Emerson, as I use similar house-rules in my own game: If you care to, as a DM you’ll get the guidelines for creating easy-to-use morale-rules for NPCs, re-introducing psychological warfare etc. in your game. Nice way to end this issue. Among the supplemental material, we find an extensive mixture of .png and .jpeg-versions of the maps – both with and without labels, making them suitable to potentially be printed out and handed to players while they explore – nice!

Editing and formatting are ok, though not perfect: I encountered multiple little typos like a missing “s” in “She” and the like, though nothing too grievous. Layout adheres to RiP’s 2-column standard and the artworks are mostly stock. The pdf comes with extensive nested bookmarks as well as two separate zip-files, providing label-less versions of the maps in .png-format as well as versions with labels and keys in jpeg-format. Cartography is detailed and done with dundjinni.

The second installment of Adventure Quarterly once again provides us with a low, a mid- and a high-level adventure, so how do they fare? I’m a fan of the whole fresh “artificial, deadly proving ground”-idea of the Ruins Perilous, so that one is right up my alley and I’m rather glad we finally get to explore the complex’s whole first level! I look forward to seeing the lower ones. My favourite, though, would be T.H. Gulliver’s relatively short wilderness trek into the land of tombs, though: The module breathes iconic, dark Sword & Sorcery spirit and brims with some disturbing ideas – If only there was more space devoted to it.

While the fluff is clearly beyond reproach and cements my impression of T. H. Gulliver’s vast capacity for writing a great adventure, the basic structure of the module is rather simple and would have benefitted greatly from some additional hazards and haunts to complicate the quest of the PCs. I’d honestly would love to see a ~100+-page sourcebook/sandbox adventure on the land of tombs. The final module is a meat-grinder in the best sense of the word – consciously deadly, entering the “Dungeon of No Return” is not exactly a good way to plan for old age. This 5-room-dungeon lives up to its name, though I have one thing to complain about that one: The background story is awesome, but no epilogue or even stats are provided – I’d love to see an incursion into the legendary prison that is the quest’s goal or even some other form of resolution – as provided, that’s the one flaw of an otherwise stellar high-level module.

When all’s said and done, we get 2 good dungeons and a wilderness trek that oozes style. Due to my minor complaints mentioned earlier, I’ll settle on a final verdict of a solid 4 stars for the second issue of Adventure Quarterly.

Adventure Quarterly #2 is available from: