Animal Races: Clan of the Swan

Animal Races: Clan of the Swan 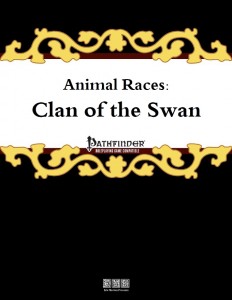 The fluff of the swan clans, as presented herein, is a stroke of genius – taking the majesty of the creature, tying it to a religion of reincarnation and a tendency towards diplomacy and the consorting with powerful entities, and we have a thoroughly unique outlook, tied with fey and phoenix, that made me excited to see what the racial traits offer.

And here, we already have a great idea – samsaran subtype, +2 to an ability score of your choice, which can be changed upon reincarnation. They are medium, get low-light vision, natural armor +1 (scaling up to +2 at 10th level) as well as the alternate avian form we already know from the installment on raptors and ravens. When reincarnating, members of these clans retain their form. Additionally, at 7th level, you automatically reincarnate 1/day when slain, gaining locate object for seven days as an SP to find you old body. This does not help when slain by death effects and when killed within those 7 days, you remain dead.

The Swan Clan provides 3 variants, all of which provide a unique benefit: the all-male Peacocks always treat Diplomacy as a class skill. Swans always treat Swim as a class skill, and swan maiden are all female and treat Stealth as a class skill. The 3 subtypes share the Swan Clan Racial Heritage feat. Avid shapechanger once again provides the basic issue of unassisted flight for long stretches of time at low levels (see my reviews on raptors/ravens); beyond that, +20 ft fly speed in bird form and 1d4 bite in the alternate form are provided. If you have 3 selected, you can get true shapechanger.

The Fighting Fowl feat nets a peacock clan member 2 primary talon attacks at 1d3, a swan or swan maiden instead 2 buffeting wings secondary natural weapons at 1d3 in the alternate form. Center of Attention allows you to expend a standard action to create a diversion that allows other creatures to hide even if observers are aware of them, allowing other creatures to use your Bluff check result instead of their own. The third feat provided, Phoenix Fire, allows you to damage the living alongside the undead when you channel positive energy, searing them with phoenix fire. Additionally, as long as you have 1 channel energy left, you can unleash a burst of said fire as an immediate action when dropped unconscious or killed, though you cannot exclude yourself – so no cheesing possible. Nice, if powerful feat!

Obviously, the genealogy and the interaction with creatures and monsters of the folklore once again is a joy to read, as is the little write-up on the deity here, the Swan Mistress Frau Prechta – German readers and those versed in our legends and folklore will get a chuckle here – oh, and yes, she participates in the wild hunt – one has to socialize, right?

As always, the series provides an array of different heraldic symbols as race traits, allowing you to get aforementioned Center of Attention feat as a bonus feat etc., but once again, providing these bonuses at a slight detriment.

This is not where the pdf ends, though – we also learn about peacock’s feather regalia and the practice of past-life regression, which puts a unique spin on class advancement and magic, with advice on the massive narrative potential of past-life adventures (NOT time-travel, mind you!) proving to be pretty inspirational – great ideas here!

Eric Morton’s swan clan is probably the most powerful of the avian clans – but it is also, by far, the most inspired one. With an utterly unique outlook, a believable culture and an overall solid array of abilities, the swan clan, while at the upper echelon of what I’m comfortable with power-level-wise, remains one of my favorite installments in the whole series.

While the additional material is not as awesome to my subjective tastes as the raptor’s dances, the swan’s content still rocks very hard. In fact, were it not for the issue with avid shapechanging at low levels, I’d consider this pdf to be among the best in the series. Now granted, I was a bit disappointed to see no color spray for peacocks, but that may be me. A slightly more diverse selection between the three subtypes of the clan would have further benefited an already good pdf. In the end, I’m going to settle on a final verdict of 4.5 stars, rounded up to 5 due to me really liking this pdf’s ideas, in spite of some minor balance concerns – concepts trump perfection for me every time.