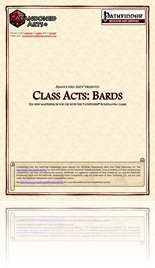 This Class Act from Abandoned Arts has 4 pages, 1 page front cover, 1 page SRD, leaving us with 2 pages of content for 10 new bardic masterpieces, so let’s take a look!

Editing and formatting are top-notch, I didn’t notice any glitches. Layout adheres to Abandoned Art’s 2-column no-frills standard and like all class act-series pdfs the pdf has no bookmarks, but needs none at this length. Bardic Masterpieces have unfortunately been mostly ignored by 3pps so far, which is a pity since they, in my opinion, greatly add to the bar becoming more unique and not just a rogue/sorceror-blend. The effects these masterpieces have are nice, I considered one of them overpowered…and yet, a nagging feeling remained that, while good, they do resort a bit too often to duplicating spells in a relatively straight manner. A certain Dissonance and the Infernal Elegy being two examples where the spells they replicate have been enhanced by unique properties, thus making them, I think, much more interesting and e.g. options like the “Shadowed Step”, which do something wholly new, are the way to go. Since this is the only true gripe I can field against this pdf, I’ll settle for a final verdict of 4.5 stars, rounded down to 4 for the purpose of this platform.

Class Acts: Bards is available from: