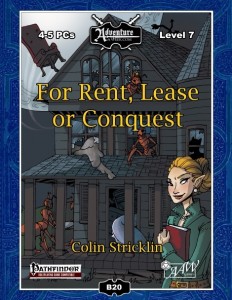 This module clocks in at 47 pages, 1 page front cover, 1 page editorial/ToC, 1 page SRD and 1 page back cover, leaving us with 43 pages of content, so let’s take a look!

This being an adventure-review, the following contains SPOILERS. Potential players should jump to the conclusion. Really. The outrageous premise is a part of the fun.

Still here? All right! First of all – if your PCs have completed the superb “Death and Taxes“-module, they’re likely to be familiar with the subtle, off-kilter humor this module sports – if not, well, then all the better. The PCs are contacted by one gorgeous lady called Sylvia Towntree, the very top-brass of Hordenheim’s real estate brokers and agents. The lady contacts them to clear out a haunted manor constructed by an eccentric gnome/architect, edgewaith manor. The encounters, though, quickly show that this is not yet another grim-dark delve into a family’s tragedy – oozes in the closet just are part one of the challenges that hilariously echo the tasks real life people may face when restoring an old manor: Of course, the place has a vermin problem.

Only we’re talking fantasy world here, and thus, alas, the vermin are sentient – a Formian queen has set up shop in the place and while the unseen servants may have been intended as a rare form of luxury, the well-meaning magical constructs can result in pretty much hilarious accidents on the side of the PCs. Heck, even the bound fire elemental providing central heating can be reasoned with and be played up for a glorious blending of the horrific and genuinely funny. It should also be noted that the house’s depiction regarding rooms is anything but rudimentary, coming with rather exquisite details even before the superb maps in full color (including player-friendly versions) come into play.

Yes, the place has a rather nasty fuse-box. Oh, and yes, PCs may actually do battle with animated chicken coops trying to eat them. No, I’m not making that up. More impressively, they receive artworks that make them genuinely creepy! Now sooner or later, the queen will seek diplomacy, rather piqued by the bad form of the home-invading PCs…and either by combat or diplomacy, hand over the deed to the manor – which coincidentally allows for the free re-arrangement of rooms – all rules for that are perfectly described in a nice, concise handout. And here, the module becomes totally awesome and bonkers – in a twist, the real-estate agent arrives with a full-blown mop-up crew to kill friggin’ everybody! She didn’t get to the top by playing nice, after all! So yes, the PCs, with full command of the house (and hopefully a couple of Formians) may defend the house and use its powers to essentially turn all those tricks they witnessed upon their wannabe assassins for one of the most glorious, iconic showdowns I’ve read in ages. Home alone, anyone?

The pdf provides full stats of for all creatures for both PFRPG and D&D 3.X.

Do you know how many modules I read per year? How many I’ve read in total? Hint: Probably too many. I have seen just about everything and only very, very rarely do I encounter a module that instills a total sense of jamais-vu in me. This module managed that. But it did so much more – it is logical, concise and downright glorious. It is also the funniest module I’ve read in years. Now don’t get me wrong – unlike many comparable modules, this one is NOT a “joke module” – it is superbly crafted, sports great writing and thoroughly iconic ideas and is professional in every way. In order to note how this module brilliantly skirts the boundaries between the creepy and funny, between high-fantasy and tongue-in-cheek nods towards our own culture, all without breaking the 4th wall, one practically has to run this exceedingly fun beast.

I am not engaging in hyperbole when I’m saying that playing this module saw one player fall from his chair, laughing. This is one of the most unique, inspired modules I’ve read in AGES. Colin Stricklin’s first module was great – this is ridiculously good. And yes, pun intended. Even the premise would be enough to qualify this as awesome, but add the optional, subdued and INTELLIGENT humor, the unique adversaries and superb production values and we quite frankly have a module that belongs into the collection of every Pathfinder DM. Yes, that good. Unless you have even less humor than the stereotype accredits to Germans like me, this is a must-have blast of a module. My final verdict will clock in at 5 stars + seal of approval and nominating this as one of my candidates for the Top Ten of 2014.

You can get this stellar module here on OBS!
Endzeitgeist out.