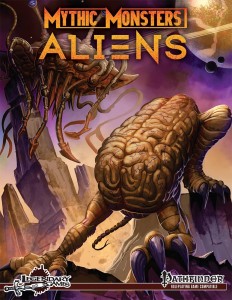 We begin this installment of Mythic Monsters, once again with supplemental material, this time around discussing the finer distinctions between aliens and creatures of the Mythos (for those not as versed with the details), while also providing the new alien subtype, which renders telepathic contact a bad idea and helping the creatures remain inscrutable. Additionally, alien items as a concept are introduced alongside a new level 1 spell variant of identify to identify technological items with the help of Disable Device, Knowledge (engineering) or Spellcraft. Additionally, the pdf provides no less than 9 mythic spells, mostly providing mythic variants of cool spells introduced in Legendary Games’ Carrion Crown plug-in-series.

But you’re here for the monsters, right?

The first creature clocks in at CR 8/MR3, the mythic adaptoid, whose sparks stun targets. The truly interesting thing, though, would be a pretty unique way of increasing the creature’s potency – by utilizing the animated objects-construction rule, a DM can add further abilities to the adaptoid’s repertoire. Oh, and it is solar powered. Damn cool build! At the same CR/MR, mythic Lunarma receive barb-based gore-attacks and use mythic power to enhance the growth of its implanted eggs and even blast forth larvae in a deadly cone. Also at this CR/MR, mythic witchwyrds do not need to be aware of incoming magic missiles to be able to absorb them and retaliate with mythic magic missiles and gaining appropriate mythic spell-like abilities. Solid, but not too exciting.

CR 6/MR 2 Brethedan can change their forms by adaption like their base brethren, but now may use this adaption to get rid of unpleasant conditions and even use adaption reflexively. Additionally, they may force damaging mergers with unfortunate adversaries . nice! At one CR less, the Mythic Shobhad receives a sniper-like, mythic power-based longrifle kill shot with a particular high chance to hit/crit.

Akata (one of the few good things to come out of Second Darkness), at CR 1/MR 1 can generate cocoons and cocoon other creatures and otherwise remain a pretty cool threat. The addition of the void zombie mini-template also is a nice touch, since it prevents book swapping. On the downside, I would have expected a mythic power-upgradeable void death disease. Oh well. Slightly above that, at CR 3/MR 1, contemplatives are masters of telekinesis and can buff themselves with the insight their telepathic capacities net them. Speaking of highly anticipated low-CR creatures – CR 1/MR 1 flumphs can shoot their needles as a ranged attack, receives aberration-detection as an at-will ability and may further delve into the knowledge cosmic via mythic power. Love how the redeemed race has been made even cooler by these added abilities.

Mythic dragonkin (no, not Midgard’s playable race) render their rider immune to fire or other respective appropriate energy types. They clock in at CR 11/MR 4 and generally…aren’t interesting. I like the rider-idea, but the creature still feels bland to me. At one CR lower, but 10 points of nastiness higher, the CR 10/MR 4 intellect devourers, who can directly teleport into your head, 100 ft. stun-shockwaves and similar nasty tricks. Slight nitpick – the ability-names are not properly bolded.

At the same CR/MR as the intellect devourer, moonflowers receive automatic, non roll-based fortification and their pod prisons can be made more stable, feature tentacles and similar, nasty tricks – pretty awesome, even before the upgraded pod creatures they can make. Exceedingly cool – two thumbs up for these things!

This installment’s new creature would be the CR 14/MR 5 Qomok, an aberration that is surprisingly not an alien and instead a shapeshifting, highly modular creature that can modify its fluid body on the fly, duplicating a massive array of abilities (including pounce, rend etc.) and assimilate target creatures. Worse, it retains the knowledge of creatures slain, can spontaneously generate feeding tendrils and can infect target creatures. While its fluff is nice, this time around, the crunch is definitely the star here, for this deadly creature actually manages to properly portray the invasive paranoia and body horror evoked by the classic Carpenter movie “The Thing” – no, don’t watch the remake. And yes, this representation is simply legendary. In a nice piece of synergy, I may recommend this creature as an upgrade for LPJ Design’s great “Cold Visitor” module (Pay what you want, btw.!) – upgrading the module in power and adding in this creature definitely amps up the lethality factor by quite a bit! Crunch-wise, this one stands apart even within this series as something glorious!

Tom Philips and Jason Nelson as Mythic Monster-regulars got some support by Benjamin Bruck and Mike Welham in this Mythic Monster installment and it does show – while there are some slightly conservative builds herein, the majority of this pdf’s creatures are downright inspired. From cool material and builds to truly alien, weird abilities, the majority of the beings herein is simply awesome.

Now yes, the witchwyrd isn’t that inspired, but you can’t win them all – that being said, this installment is still one of the best, most inspired ones in the whole series and the proper implementation of bookmarks and versatile abilities as well as the glorious new creature conspire to render this a full blown 5 star + seal of approval recommendation.