The Lost Library of Thoth

The Lost Library of Thoth 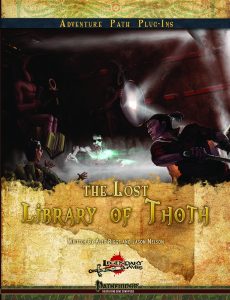 This little module is intended to be played either during the second or third part (levels 6 – 8) of the Mummy’s Mask AP and clocks in at 20 pages, 1 page front cover, 2 pages of editorial, 1 page ToC, 1 page introduction, 1 page SRD, 1 page back cover, leaving us with 13 pages of module, though, as always with Legendary Games, these are pretty tightly packed, so let’s take a look!

All right, only GMs left? Great! Whether as a means for information gathering to fill in blanks the PCs failed to get during the AP or as simply a means to gather some XP and treasure, the library offers some lure for the PCs – as a fabled repository of knowledge, it was never intended to be publicly accessible…or easily, for that matter. The library was equal parts library and temple and only accessible once per month…and its access would require the life-threatening tests that the faith once regarded as adequate for gaining the knowledge herein. From the outside, the library is a moderately-sized pyramid with a single, massive stone door – only while it is bathed in the full moon may a supplicant press his hand on the stone and expect the doorway to open…only to have a desiccated corpse fall at the PCs…a more than precise warning to not dawdle within the confines of the library! The dungeon, from room one on, manages to portray and convey well a sense of mysterious antiquity and support a valid leitmotif, which, obviously, would be the Ibis. Smart players can interpret what they see as cryptic allusions to give them an edge – much like in classic adventures….and if the PCs do not take heed, they may well find themselves sealed inside the library…and it is doubtful they’ll have the means to easily survive a month inside.

Indeed, PCs and players researching and getting involved in the flavor of the dungeon will have an edge and for example, have a chance to avoid the tilting room that is announced by the symbolism of the scales of Thoth and his aspect as a force of balance. Indeed, this module introduces the PCs pretty directly and in a rather amazing way to the ideology of the ancient deity, with another room, for example, providing a judge’s dilemma to be solved according to Thoth’s tenets. On a failure, the PCs will be challenged in a more straightforward manner, so yes, you can brute force this if your PCs are doing the murder-hobo angle. Oh, and there would be a synergy: Take a room, where rotating mirror-stands that reflect moonlight can be used to unearth invisible reliefs…and the deadly, similarly invisible threats waiting here! Yes, this is damn evocative.

Beyond these challenges, mythic graven guardians (with two different statblocks!) may awake from their slumber and require someone adept at linguistics to properly formulate the ritualistic replies to their questions. Finally, within the library, the very parchment may cut the unwary PC to ribbons…even before the final axiomite guardians.

The pdf also contains no less than 5 unique spells to be found here: Hieroglyphic Barrier is a kind of wall of glyphs of warding that sheds light and provides concealment, but does not block line of sight, allowing for some unique tactical options. The greater iteration instead employs greater glyphs. Moonlight would be a light-variant appropriate for those sensitive to light…oh, and via an optional focus, it is more flexible. Thoth’s Crescent is cool: It enchants a sickle in a complex and fun manner and in the hands of a devotee of Thoth, channel energy can be employed to further empower the enspelled weapon. Neat! Finally, the Threefold Moons of Thoth generate three ephemeral moons that the target may direct for diverse actions…or have the circle the caster, providing different benefits. Interesting and flexible spell. Neat!

As a big plus, the pdf comes with a player-friendly full-color version of the map that you can print out, cut up and hand to the players as they explore. Two thumbs up!

Conclusion:
Editing and formatting are top-notch, I noticed no glitches. Layout adheres to legendary Games’ two-column full-color standard for Mummy’s Mask plug-ins and the pdf sports neat, high-quality original pieces of full-color artwork. The pdf comes fully bookmarked for your convenience and the full color cartography is great.

Alex Riggs and Jason Nelson have crafted a dungeon that may be brief…but oh boy is it a sweet one. I expected a thematicly concise dungeon and got just that; though frankly, it excels at its task: Smart players that did their homework have a decided edge in this one, rewarding immersion and thinking about the complex they explore. This rewarding of smarts adds a significant character to the complex. The challenges are diverse and fun, allow for skill-use and while there isn’t too much to be done regarding social challenges, this dungeon does sport a lot of opportunities for investigators, bards, etc. to shine. Sure, you can also try to brute force this module…but playing it smart may be more rewarding. All killer, no filler, this module may be brief, but oh boy is it sweet. My final verdict will clock in at 5 stars + seal of approval.

You can get this great module here on OBS!