Animal Races: Clan of the Raccoon

Animal Races: Clan of the Raccoon 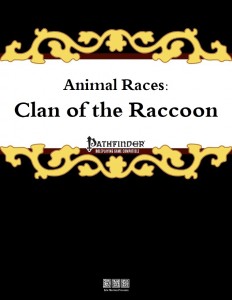 Much like prior installments to this series, we herein receive rules for PCs belonging to one of the tightly and concisely-presented animal clans, with raccoons, badgers, skunks and wolverines, unique though they may be, being grouped into this installment.

Racial trait-wise, members of this clan can opt for medium size (and +2 Wis, -2 Cha) or small size (+2 Wis, -2 Str) and 30/20 ft. movement rate, conversely. They also receive low-light vision, scent, +1 natural armor that scales up to +2 at 10th level. The race also receives a primary natural weapon for 1d4/1d3, respectively. On a slightly nitpicky side, usually, bit attacks for medium creatures are 1d6, those of small creatures 1d4, which would denote a minor glitch, were it not for the option to upgrade the attack to the proper damage dice. On the plus-side, the pdf does properly denote bites as primary natural weapons. Now depending on the precise clan you choose, you also receive additional benefits: +2 Con for badgers and wolverines, +2 Dex for raccoons and skunks. badgers may choose the badger clan heritage bonus feat as a fighter combat feat, while raccoons may select their clan heritage as a ranger combat style feat and wolverines may choose the badger clan heritage in lieu of a rage power. Skunks may select their clan heritage feat as an alchemist discovery or the new skunk bomb feat – on the nitpicky side, there is an “or” missing between the two feats.

If you’re not yet familiar with the clan heritage feats – each feat can be taken multiple times and upon choosing the feat, you may select special racial traits from a list specific to each feat. If you have received all available choices or fulfilled a condition specific to the feat, the selection diversifies, allowing for more powerful options, but also slightly less versatility. Still, seeing how burrow speeds, climb speeds, claw attacks (these with the right damage dice), ferocity are part of this deal, the design decision definitely makes sense. Both the badger and raccoon clan heritages allow the characters to gain rage, by the way – or increase the rage rounds by a massive +6. If this looks powerful, well, taking the feat 3 times before somewhat offsets that. That being said, I do consider making rage as the defining ability of the barbarian class freely available *potentially* problematic – while not broken on its own, rage does double as a prerequisite for some combos, so in that regard, one should be careful.

The skunk bomb-feat is cool in concept, but not particularly impressive – bombs modified by the feat deal no damage, instead causing nausea/sickened with a scaling DC…but only 2/day. No scaling. I really think this feat should be usable more often, especially since the nausea on a failed save does not last that long. Why not adhere to how alchemist bombs are handled?

Much like the previous installments in the series, we receive extensive and well-written introductions to the raccoon clan’s folklore, including the interaction with several mythical beings and adversaries from the bestiaries as well as the feud with the dread kytons. Azeban, the great fool and patron deity of the clan is featured alongside neat notes on genealogy and heraldry, which is tied in a genius way with the trait-system – and this time around, instead of one trait, choosing a heraldic symbol nets you a bonus feat – but also a permanent penalty to one save. A total of 6 such heraldic crests are provided.

The pdf also provides a mini-gunslinger archetype that nets a modified class skill list as well as the option to choose select rogue talents instead of certain deeds. Solid, but nothing to write home about.

I’ve made no secret about my love for the first couple of installments of this series and this has not changed – I still consider these pdfs to be smart, well-written and concise. That being said, this time around, I’m slightly less swept away than before. This has various reasons: First, gaining rage without multiclassing can be potentially games – it’s hard and thus will not influence my final verdict, but it still remains something that leaves me with a slight ache in my stomach. The Skunk Bomb-feat, while high in concept, is weaker than it imho should be – the bombs have a powerful debuff, but they use the alchemist’s bomb-resource and deal no damage. Scaling uses or a tie-in to the alchemist’s bomb class feature would have been appropriate. Finally, the archetype…is solid, but just that. Not rest assured, this is me complaining at a pretty high level – this still is a good pdf…but one that feels slightly rough around the edges. I also wished wolverines had received a crest…or their own clan heritage feat, but that may just be me.

I will hence settle for a final verdict of 4.5 stars, rounded down by a tiny margin to 4.

You can get this neat installment of the series here on OBS and here on d20pfsrd.com’s shop!