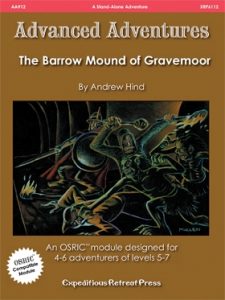 This installment of the Advanced Adventures-series clocks in at 13 pages, 1 page front and back cover, 1 page editorial, 1 page SRD, 1/2 a page advertisement, leaving us with 9.5 pages of content, so let’s take a look!

My reviews of this series were requested by one of my patreons, to be undertaken at my convenience.

This adventure, like all in the series, uses the OSRIC rule-set, but can easily be converted to other old-school rules. It should be a given by now that there are a few formatting peculiarities that are still consistent in their application, so boil down to a matter of aesthetics. The cartography is functional, as always, but we don’t get a player-friendly version. This adventure is intended for level 5 – 7 characters and a well-rounded party is very much recommended. As far as supplemental material is concerned, we have an artifact that plays a part in the story (would have been nice to get a means of destruction, but that may just be me) and an evil magical weapon, a mace that evil clerics will adore. The pdf also includes a new monster with its own illustration, the barrow golem, a being that can encapsulate PCs…pretty nasty one!

All right, that’s as far as I can go without diving into SPOILERS. Potential players should jump ahead to the conclusion.

All right, only GMs around? Great! *ähem* “The Clans are marching ‘gainst the law/bagpipers play the tunes of war/death or glory I will find/rebellion on my mind!” Richard Dirkloch has rallied the clans of a moor-like Highland region to march against the good King Oldavin, whose men have burned Dirkloch’s beloved for the witch she admittedly were; the battle was fierce, but in the end, the good King did triumph…but Richard Dirkloch is not yet vanquished and found. Having retreated to his barrow fortress, built atop the ruins of castle Grimspire, it’ll be up to the PCs to bring Dirkloch in and squash his plans for sedition, which actually turn out to be darker than anticipated!

The PCs begin their adventure on the field of battle, with several means of getting them there provided. The gravemoor as a region comes with an appropriately creepy array of different possible random encounters that make sense and don’t devolve into the too fantastic…and when they reach the Gravemoor barrow mound pool, they’re in for a surprise: Richard Dirkloch assaults them as a wight with unique properties – this establishes the antagonist early and allows the GM to roleplay the dichotomy between sadist and romantic lord. Sooner or later, he’ll retreat to the ice-cold and murky depths of the pool, leaving the PCs to explore the grave moor barrow mound, which is a combination of maze and regular dungeon – and it is littered with secret doors.

The winding tunnels and non-linear-structure of the barrow hill make for a surprisingly, considering the brevity, nonlinear experience here. Secret doors galore conspire with the dungeon’s global effects to generate a sense of claustrophobia I did not expect. Even better, this is also enforced by global rules applied to the dungeon, penalizing attacks with anything but small weapons, and the curved structure means that ranged weapons are less effective as well – an excellent example on how a dungeon’s design and map can help emphasize the theme and generate atmosphere. Two thumbs up!

This intelligent notion also extends to the keyed encounters in this massive mound – while there are only 7, these do have in common that they provide twists on classics and feature evocative adversaries. Strategies for Ach na Creig the gleistig, half woman, half goat, are provided, and manage to make her a credible threat. This all-killer, no-filler attention also extends to the terrain features like magical pools, a lobratory – there is player-agenda here, and e.g. cleaning a saint’s statue may net a potent boon. Hidden below the barrow level, there is the second level of the dungeon. Smaller and more compact, it represents a respite from the horrors of the claustrophobic barrow and doubles as the base of Dirkloch, where his undead steed and personal quarters await – and where he will orchestrate his masterplan, unless stopped: Courtesy of the midnight opal, he seeks to animate the untold fallen soldiers and lead an undead army against the king – preferably with his bride returned to his side…and only the PCs stand between him and the fulfillment of his ambition…

Editing and formatting are very good on a formal and rules-language level. Layout adheres to the series’ two-column, classic old-school style, right down to the font. The artworks are b/w and solid, and the cartography is functional, but we do not get player maps. The pdf comes fully bookmarked for your convenience.

Andrew Hind delivers big time here. The plot and dungeon scenario are both classics, and executing these well, in a matter that does not feel stale or bland, is an achievement indeed. The concise writing not only produces a very atmospheric dungeon, it also manages to make the adversary plausible, the struggle against him more personal and thus, engrossing. This is, at least for me, the best of the early Advanced Adventures – it manages to evoke more atmosphere than many modules of thrice that size, leaving me just with the lack of player-friendly maps as a serious criticism. This time, though, I do feel that mapping is such a crucial part of the experience, even in VTT-scenarios, that the module doesn’t suffer from their omission. While this may be brief, it is better than many longer adventures – quality over quantity.

As such, this receives a final verdict of 5 stars + seal of approval.