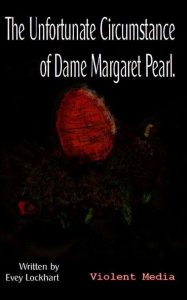 This is the second of the brief adventure-sketches/set-ups released by Violent Media that I’d describe as “Weird-Sad”; it clocks in at 12 pages, 1 page front cover, 1 page editorial, 2 pages of SRD, 1 page back cover, leaving us with 7 pages of content. It should be noted that the print version features a ToC as well as a bonus page. Pages are laid out in 6’’ by 9’’ (A5).

So, what is this? Structurally, this is an adventure of sorts, a mystery/Investigation of sorts to be precise. It presents the characters encountered in a bullet-point format that notes station, visage, personality and secrets, if any. The module assumes a kind-of-Victorian backdrop and should equally work well in Early Modern contexts and sufficiently progressive cities. A town of at least intermediate size is recommended regarding the backdrop. For level-range, I’d suggest level 1 – 2.

To give you an example for the bullet point presentation of the NPCs: One notes for “Personality”: Bombastic/Melodramatic/Vain/Delusional. This makes running the respective NPCs surprisingly simple. Regular NPCs don’t get stats within, though the main antagonist does. As far as rules are concerned, the supplement assumes LotFP (Lamentations of the Flame Princess) as the default, but is converted to other OSR-rules easily enough.

As far as navigation is concerned, the pdf has no bookmarks, but instead has hyperlinks to each section at the bottom of each page, capitalizing on the brevity of the supplement. The side-view mini-cartography of the respective homes that the PCs may visit is okay and provides a general notion, with an office and 2 floors of Dame Margaret’s home also getting a top-down view. That being said, Luka Rejec does contribute one artwork that is indeed nightmare-fuel.

As far as rules are concerned, there is a central ability that notes “Saving throw vs. Poison, modified by CHA” – I assume that to be a bonus, not a penalty, though one could argue for either interpretation.

This is a dark adventure that features themes of deceit, old age, mercy-killing and decrepitude. Discretion is advised.

All right, this is as far as I can go sans diving into SPOILERS. Potential players should jump ahead to the conclusion.

All right, only referees around? Great! Mayor Preston Hilden Greenbriar II has offered a generous reward to cure a mysterious ailment that has befallen the widow of the honorable Herbert Pearl. (Who was his secret lover over many a year…) and an inept occultist, one Alan Smythe-Worster has been all too willing to accept…but so will the PCs, right? As an aside, the first page provides a couple of quotes that make for a good basis to paraphrase from.

When they encounter Dame Margaret, they will meet the sweetest old lady: Naïve, nice, kind and a true sweetheart, which may well have the PCs suspect Bethany Flora, Herbert’s bastard sister, who constitutes a great red herring. You see, Margaret may be sweet in personality, but she has contracted a truly gross magical, degenerative disease: One arm has cracked off, like from a statue, but to make up for this, extra arms have begun to grow, with some of them sporting disturbing face-like protrusions that occasionally whisper and scream. Pointed teeth, frequent vomiting and a round, weeping eye, usually closed, embedded in her chest, make her nightmare fuel indeed.

She is also utterly unaware of her lamentable state. To make matters worse, the magical parasite that has befallen her takes control of her body while she is asleep, something that she cannot be made aware of: She suddenly becomes a super-stealthy and deadly creature and much, much more deadly. Worse, there is a timer, as, during the 9 nights after transformation, the Margaret-thing will proceed to ritualistically stalk and murder cats, build a twisted nest and lay a horrid egg…and sooner or later, she will attempt to consume her associates in the state before succumbing to the disease…and spreading it further. These occult practices are genuinely creepy and atmospheric.

Now, Margaret, while not under the control of the parasite thing, is a non-combatant, and in order to stop the thing, both she and her subconscious parasite-thing form need to be slain. There is a sad truth underlying all: “Beware of Angels, quick to sing, but black of wing.” – an angel of pity saw her, and these do not exist to evoke pity, but to perpetuate it; it saw Margaret say a prayer for a corpse in an alley. That’s all it takes.

Here is a crucial difference between the pdf and print version: The print version does provide an additional page, an addendum, wherein the means of unearthing this truth are explained, alongside the means to bring the angelic entity to heel. Its stats are also included in a rudimentary fashion in the print version. This one page makes that version superior, in that it allows for a more interesting and alternate resolution; whether the parasitic disease’s banishment reverts Margaret to her former form or not, though, remains up to the referee.

Editing and formatting are good, if not perfect, on a formal and rules-language standard. Layout adheres to a 1-column b/w-standard. I have already commented on the artwork/cartography above. The pdf, as noted, sports handy hyperlinks. The PoD softcover is thin and a bit pricey, and the paper quality, alas, is not as high as that chosen for “Smile with us, Friend”, the previous weird-sadness scenario.

That being said, I do recommend that, if you enjoy this supplement, you support author Evey Lockhart by purchasing the softcover; this humble offering is surprisingly gripping in its set-up, and while it is basically just an adventure-sketch instead of a detailed, thoroughly formulated scenario, it is more original than many brief adventures I have read. The prose, in spite of the brevity, manages to evoke a weird and horrific atmosphere, and I applaud moral conundrums and brains to be the focus here, as opposed to just hack and slash. The red-herring array that each NPC offers also can be considered to be helpful to customize this one, but I still wished we had this in a more fleshed out manner.

Oh, and the pdf? It’s PWYW, so you don’t run any risk checking it out. If you do enjoy it, consider leaving a tip and/or getting the print version. This is very much worth supporting. My final verdict will clock in at 4.5 stars, rounded down for the purpose of this platform.

You can get this unique adventure-sketch here on OBS!

You can find the PoD-print copy with the addendum here on lulu!