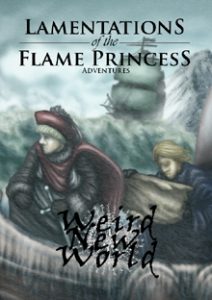 This module/sandbox clocks in at 62 pages, 1 page front cover, 1 page editorial, leaving us with 60 pages of content, though these pages are formatted for the A5 (6” by 9” booklet)-size, which means you can pretty easily fit 4 pages of content on one sheet of paper when you’re printing this out.

All right, so this represents pretty much one of the experiences where I got a book merely for completion’s sake. The title “Weird New World” did not appeal to me and neither did the cover…but I am very much happy that I did get this book.

So, what is this? In short, it is a depiction of a fantastic version of Antarctica or a similarly icy environment – and I mean “beyond Norse sphere of culture”-level icy environment. As in polar nights and days. And while I was reading through this book, I realized…that I had never seen this angle attempted in an RPG-supplement. Basically, this adventure’s goal, if you want to put it that bluntly, is for the PCs to chart a kind of Northwest Passage. Wait!

I know, it sounds dull.

Believe me when I’m telling you that it’s anything but dull!

So the premise is pretty simple, yes – there are tiny civilization outposts represented by stations and their soldiers, but what exactly you do with the set-up that’s provided is wide open – a sandbox in the truest sense of the word. But a sandbox that is more than just basics: First of all, I should note the grand scale – the final page of the pdf is devoted to a gigantic map of the hex-crawling environment that can be found within these pages; this area is so big that it also comes with quadrant-versions for printing out.

Thing is also- cold does not equal cold in the arctic; everyone who even has spent one winter in a Northern climate will know the massive differences – and hence, the pdf introduces basically 6 different climate zones, with varying degrees of winter severity, codified also by the respective months of the year – and they are brutal. If you thought going into the arctic with metal weapons and armor…well, not a good idea. The different effects on the player characters can be harsh. Of course, random encounter tables, by sea, land and ice, are included in the deal, with brief descriptions of the respective encounters. This extreme cold weather system alone may be well worth the scavenging potential, but it is, by far, not the central draw of this supplement/module.

You see, the draw of this toolkit/setting to throw your PCs in lies, to a vast degree, in the question of what you do with it: The pdf is littered with story seeds. Of course, there would be the local Inuit stand-ins, the Eskuit tribes and the less than amicable treatment they receive at the hands of the agents of the “civilized” world; but that is only the tip of the ice-berg. (Haha – okay, I’ll punch myself later for this!)

Anyways, in order to give you a closer idea of what to expect herein, I’ll have to resort to going into SPOILERS. Potential players should definitely jump to the conclusion.

All right, so let’s start with the obvious: There are elves. But not some kind, friendly Santa’s Little Helpers. And no cliché ice-elves…but the bane of the frickin’ Eskuit. You see, the elves in these climates once believed that they’d set sail to their undying lands…and landed here, believing that basically their afterlife had been compromised, that this bleak, icy hellscape was their purgatory. Obviously, the only way to solve this is and get to the proper undying lands… is to KILL EVERYONE that taints these elven lands. Yeah, they are not nice.

Beyond these, there would be an adversary straight out of a simulationalist survival story – the Beast. A super-strong, hyper-deadly and aggressive, preternaturally cunning white bear that will do its best to hunt down the PCs. It should be almost taken for granted that, yes, there also is a Carpenter-Thing waiting to be encountered (and woe to those that carry its seeds to civilization!) and there is a living aurora that makes what people believe it to be true – so listen well to the PC’s speculations! A Rushmore-esque representation of dread Ymir carved in the ice, a shuttered village full of vampires (30 days of night, anyone?), remnants of ancient civilizations and strange obelisks can be found in the white wasteland.

If you don’t get devoured by the white worm, you can even meet bird-people, a man who exerts mental control over caribou…and worse. Beyond these copious seeds, each of which can potentially carry a whole adventure, there also are detailed mini-dungeons.

One of them would be the cavern used by pirates to hide their treasures – where body-invading fireflies can be found alongside caves that make you believe you’re among anthropomorphized candy can be found. (Okay second one with that theme in 2 weeks…sometimes, my life is weird…though, admittedly, here, it is a hallucinogenic fungus’ work…) Beyond that, remnants of super-science and vending machines can be found as well as puzzles solved – it is intriguing to see the execution managing to make modern elements fantastic. The description helps the GM drive home the strange dynamics that happen when medieval/early modern characters meet modern objects.

Have I btw. mentioned the references to reptilian people and the insane weirdos that believe they’re Norse gods?

The first of these mini-dungeons, though, would pale in direct comparison of the second of the more detailed locales: The great shipwreck #2: The ship has been impaled on a column of coral, with mast and sail under water, with only the rear of the ship rising from the water: The exploration of the mapped ship adds an amazing sense of verticality to the exploration, one rarely seen…and there would be strange survivors…and there are undead (including invisible ones) that operate on subjective gravity. Yes, this can be one of the most amazing scenes…but things get cooler. You see, the coral shaft is hollow and leads to even stranger, subterranean caves…and crawling it down may see the PCs attacked by a squid, as it’s ripping apart the column, its tentacles potentially sealing the shaft in a truly claustrophobic and cinematic encounter. And have I mentioned the strange spine-fish men down below?

Oh, and there would be, outside of these locales, the plateaus that contain ancient cities, now haunted by the abomination that wiped out the culture…or frozen mammoths….and no, I have not touched on everything herein.

Editing and formatting are very good, I noticed no serious glitches. Layout adheres to a 1-column b/w-standard and the pdf is pretty printer-friendly. The interior b/w-artworks are sparse, but evocative and act as nice handouts, if you want to. The pdf comes fully bookmarked with nested bookmarks. The cartography is solid and does its job.

James Edward Raggi IV’s Weird New World is a fantastic supplement that contains a ton of gorgeous adventure hooks and seeds. Incredibly dense, the book can conceivably provide at least a month or even up to half a year of more of gaming if you really want to squeeze this gem dry. Chock-full with a massive array of glorious seeds, inspiration and potential, this represents one of the best exploration modules I have ever read – while there is ample of weirdness and a plethora of deadly creatures to be found in these pages, that is not what makes this supplement exceptional.

What makes this supplement/module shine is that, more than the collective sum of the weirdness-toting things you can encounter, it is always the icy eternity of the area that represents the true adversary here, that makes the module/environment work. This is inspired, evocative and a sandbox in the truest sense – and no, if you’re sensitive – while challenging and yes, lethal, this book is never unfair, never dickish or sadistic for its own sake. Relentless and brutal like the environment it depicts, yeah – but gloriously so. In short: To me, this represents one of the most amazing of the early LotFP-offerings, a book that should be considered to be a must-own. Now can we please get a revised and expanded option that I can get in print, preferably with a poster map?

Forgot the verdict? Oh yeah, obviously 5 stars + seal of approval. A must-have offering, even if you’re playing another system. This is definitely good enough to convert…and if you’re an OSR-gamer, then what are you waiting for? Get this now!

You can get this inspired hex-crawl/environmental sourcebook here on OBS!