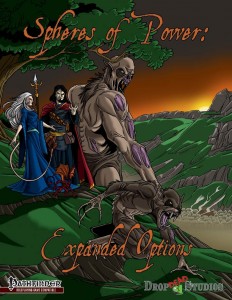 One rules component I failed to address in its omission in the original spheres of power-book, consciously so, mind you, would be favored class options: While the rules by now have become a staple for PFRPG-games, not all groups I know play with them and considering the sheer amount of material covered, I was not surprised to them relegated to the expansion material this way. Beyond brief conversion advice for the conversion of spells-known type favored class options, we not only cover the core races, but also aasimar, goblins, merfolk, orcs and tieflings – still leaving some room for further expansion, sure, but when you take a look at the favored class options, they are actually rather interesting from extended concentration-duration effects for incanters to +1/4 bound nexus and increased movement speeds, the favored class options herein struck me a reasonably balanced, did not contain blatant power creep and over all, can be considered to rank among the better such collections I’ve seen – kudos!

Now one very vocal requirement that most fans wanted pertained the conversion of the non-core classes to the spheres of power-system and this pdf happily obliges: Not only the Advanced Player’s Guide (plus Magus!), but also the Advanced Class Guide is covered. (Though not sphere-based alchemy, should you have been looking for that…) Of particular interest for me here was the magus: His Spell Combat and spellstrikes have been expertly translated into the new system and expanded magic now nets you a base sphere/magic talent wild-card that duplicates in a rather neat manner the flexibility of the replaced knowledge pool, scaling up later, btw. More impressive, at least to me, was the elegant redesign of the orcale’s bonus spell-granting curses and the redesign of the summoner: The latter codifies a companion as the eidolon; while still potentially problematic, the foundation of sphere-casting is ultimately more solid than that of the base class. The arcanist’s interaction between spellpoints and the arcane reservoir is also rather well-crafted and quite a few exploits have been properly codified anew.

Obviously, there also are archetypes for the new Spheres of Power-centric classes: The Armorist Warleader replaces bound equipment with a full-scaling mount and gains Tactician at 5th level and improved versions at later levels. An okay take on the concept of a tactician-y armorist, though I maintain that there are better options for the latter component. Symbiotic Knights get a symbiote they can summon, which then acts as their armor – one that spontaneously upon summoning may change its properties, though at the cost of only being able to properly use the symbiote him/herself. Elementalists may elect to become elemental-themed warriors (all solid, all representing concepts I’m bored to death with by now), though I still cringe at “frost resistance” – the proper rules-language is “cold resistance,” darn it! Geomancers are specialists in the nature sphere. Eliciters may opt to become IDs, who receive more emotions, or hynotists, who gain an investigator’s inspiration pool at 1/2 class level + Int-mod with different skills improved as well as limited investigator talents. Both valid.

Fey Disciples can become Seelie Disciples that replace darkvision with versatile performance and high-level fascinate/suggestion. Unseelie Disciples instead gain Sneak Attack and rogue talents. Hedgewitches can elect to become dragonblooded mortals, gaining natural attacks…with a cool-down breath weapon…which per se is mechanically a damn cool option. At the same time, the damage-output here is too much: Level times d6 with decreasing cool-down is truly nasty, particularly considering that the whole archetype only costs one tradition. The Triple Goddess archetype taps into the iconic notion of the norns, fates, etc., gaining per se damn cool fate/life/death abilities – though, on a formal level, you usually do not “pass” a save…but that gripe remains cosmetic.

The Incanter can become a warlock or reincarnated master – warlocks gaining a possession-form of okay buffs, while reincarnated masters work particularly well for exceedingly high lethality games/Dark Souls type of gameplay, including auto-reincarnation at 6th level. Warriors of Holy Light are a bit paladin-y mageknights, complete with good alignment-restriction and lay on hands…which imho is a missed chance: We see “cold, hard light”-type of evil options far too rarely. Conversely, the Underdark Champion unnecessarily locks the character into evil alignment with darkness-based smites and the like. Dragoons don’t get FF IV’s iconic jump, but at least receive a mount. Divine Lariats are the first archetype I really enjoyed: These guys are basically Wonder Woman, the class – sans the gender restrictions…and they make the lasso badass as a weapon. Kudos!

The Beastmind Shifter hones his mind, while the pack master gets animal companions…potentially more than one. Okay, I guess. Soul Weaver Lichlings duplicate some lich-y abilities like negative energy affinity and a touch of corruption. Dual Channelers replace bound nexus with better channeling…of both positive and negative energy and they also gain both access to blessings and blights…and overall, the archetype made me fear that it’d be OP in the hands of a halfway decent player…which it is. Wildcard-channel-energy-based feat additions (ignoring prereqs!) and the like just pile on to the already very strong archetype, rendering it imho BROKEN.

The Symbiat Snypase is a teleport-specialist and the Telekinetic Warrior is, surprise, also about telekinesis. Finally, Thaumaturge devourers get slightly higher forbidden lore backlash when not dropping foes below 0 hp…could be kitten’d…but honestly not worth the trouble. This one is pretty much the definition of a filler archetype. The Pactmage enters one pact of 3 provided and then gains celestial, infernal or aberrant blessings – which would be infinitely more compelling, had the book taken a cue from Covenant Magic or Pact Magic and either integrated them or devoted a similar amount of space to the concepts – as provided, this remains a bit barebones for the concept.

Conclusion:
Editing and formatting are very good, I noticed no glaring issues. The pdf comes fully bookmarked for your convenience and layout adheres to a nice 2-column full-color standard with some new artworks and some stock art you know from older publications blended.

The good things first: Adam Meyers, J Gray, James Mars, Michael Sayre and Douglas Schaub have crafted what I’d consider a must-have expansion for Spheres of Power – overall, the rules-language is sound and the favored class options plus conversion archetypes alone make this probably a no-brainer for any campaign using spheres of power. At the same time, this book disappointed me on a pretty high level with its archetypes. I get that some cookie-cutter-type engine tweaks regarding the archetypes may be required; the archetypes aren’t bad.

But if I had to name one weakness of Spheres of Power, then that to me, the classes do not feel that distinct; their individual identities and class features, when divorced from the superb system, just are not that interesting. They are not bad, mind you – quite the contrary! But you won’t see me convert any of them to a non-SoP-game, they just don’t have enough unique tricks when separated from their system. The archetypes had a chance to change that and didn’t…but, as a reviewer, I will not penalize this book for that – to do otherwise would be bad form.

I am, however, going to penalize it for the few instances of blatantly OP content and for the uninspired, utterly bland “I get a mount”-dragoon, the very definition of cookie-cutter-design. Thankfully, these do not represent the overall quality of an otherwise must-have book.

It is only due to these issues, not the lost chance mentioned above, that I arrive at a final verdict of 3.5 stars, rounded up to 4 for the purpose of this platform.

You can get this all but required expansion for Spheres of Power here on OBS and here on d20pfsrd.com’s shop!