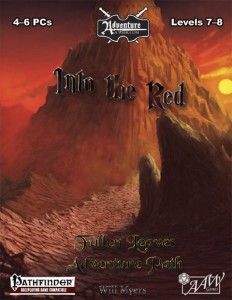 The third installment of the Fallen Leaves Adventure Arc clocks in at 44 pages, 1 page front cover, 1 page editorial/ToC, 1 page SRD, 1 page back cover, leaving us with 40 pages of content, so let’s take a look, shall we?

Still here? All right! Last time around, we left the homelands of the elven people behind, with an increasing amount of factions on the heels of the PCs and a first glimpse of a powerful nemesis of the elven people – onwards to the Scorched Lands, one of the most unique areas of the Aventyr-world, towards the realm of the lich of the Sun Shard Mek’Madius – and indeed, traveling the Scorched Lands is a challenge – there is a phenomenon called “The Transgression” -not only is it particularly deadly, it has several effects – if you die, a plethora of unpleasant effects ensue. The legendary disease called Ashen Death is omnipresent…and mutation runs rampant, as depicted by a table featured herein. Deadly Sand Samiels abound and even in shelter, weathering The Transgression is not a feat for the faint of heart – indeed, this little trek alone has more player agenda and challenge than the whole second installment of the series, not to speak of sheer unique flair – love it!

Traversing the less-than-friendly wastelands, the PCs may encounter the legendary Fiery woman, purchase unique coolants and alchemical tinctures from the gorgeous Doc (though, in a minor formatting glitch, text does not fit one of the boxes used in layout – but is still legible, so no problem) and they do find a drow matron, in creepy spider-silk clothes – one who proposes alternate means for using the artifact at the end of their quest – a vision of a world that may bring change and seem brutal, yes, but also one that ends the status quo and proposes a new set of ideologies, a new view and perspective – I am pretty interested to see how the choices ultimately pan out in the finale of the series. At the end of their road through the scorched wasteland, the tower of Mek’Madius bodes – with water coruscating at its base and a water naga, of all creatures, guarding the entrance. Navigating a maze of caverns, the PCs may finally find the entrance to the massive tower, which is lavishly mapped in gorgeous maps. The tower contains wonders indeed – from magical equipment to odd and creative traps like golden eggs to finally brave Mek’Madius’ last creation, the shard golem.

Among the massive library and strange machinery found, (btw. lavishly-rendered in a full-page artwork), there is no trace of the lich but a very odd array of hints that make pretty apparent that he may return…some day. Hopefully, when the PCs are far, far away…but alas, once again, the fabled artifact, the Menalpaur, eludes the PCs…but not without a trace. The Yerek Stepp beckons with a promise of the end of their journey… The maps of the tower are btw. reproduced in player-friendly versions – nice!

Editing and formatting are pretty good – apart from cosmetic glitches, I noticed no particularly nasty glitches. Layout adheres to AAW Games’ two-column full-color standard and the pdf comes fully bookmarked for your convenience with nested bookmarks. Cartography and full-color artwork, both of which are provided in copious amounts, are beautiful. It should be noted that cartography also provides a neat, player-friendly version of the maps.

Will Myers’ third part of the saga is BY FAR the best in the series. The first two installments very much were cinematic journeys – with copious amounts of read-aloud texts (something also provided herein), they felt very much like a rendition of a hero’s journey in module form. At the same time, though, this third book represents the series coming into its own as it surpasses its predecessors by a long shot – why? Well, Part I lived from a sense of continuity – without it, it lost some of its flair. Part II, to me, was too linear and slightly too much cut-scene. This one, though, is a trek through a unique landscape, with deadly hazards – there is a lot of wondrous material to behold here; there is a lot of actual challenge to surpass here, including an intriguing, flavorful dungeon. Indeed, this has action, adventure – all you need!

Much like its predecessors, this is not a hard module – but it is more of a challenge. It doesn’t offer cruise-control solutions and it puts the reins back into the hands of the players. Combine that with the captivating writing and we have a fun module. Now I am at this point a bit weary and not sure whether the arc manages to deliver the payoff of all the things hinted at during the three parts so far, but if it pulls that off, then we’re in for a furious finale. While not perfect, this is still a very good module – and well worth a final verdict of 4.5 stars, rounded up to 5 for the purpose of this platform. And even if you don’t want to run the AP – this makes for a neat stand-alone!

You can get this trek into a unique wasteland here on OBS!