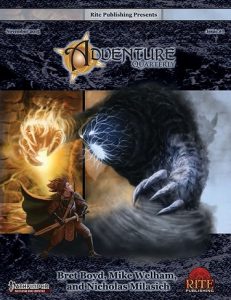 The 7th installment of Rite Publishing’s quarterly magazine, their spiritual heir to Dungeon, if you will, clocks in at 63 pages, 1 page front cover, 1 page editorial, 1 page ToC, 1 page SRD, 1 page advertisement, 1 page back cover, leaving us with 57 pages of content, so let’s take a look!

As always, this installment begins with a brief editorial by Robert N- Emerson before diving into the modules, but let’s take a look at the supplemental material first. Why? Because it is extremely useful: Steven D. Russell provides an article that helps structuring PC subplots in your campaign…and he has a 100-entry-strong table of Pre-Butt Kicking One Liners. This table is incredibly awesome: “We haven’t been introduced, so I’ll call you ‘prey’.” or “The only one who can save you now is Orcus…and since I can’t bring him here, I’m going to send you to him!” – perhaps it’s just me being a big fan of AHHHHNLD’s one-liners, but I’ve been using that table quite a bit.

Anyways, let’s talk about what’s really important, namely the modules in here. As such the text that follows will contain SPOILERS. Potential players should jump to the conclusion.

The first adventure belongs to a woefully underrepresented type of module in PFRPG – namely, the hexcrawl. Bret Boyd’s “Shattered Dreams in Winter” makes use of Ultimate Campaign’s exploration rules and has a synergy tie-in with the excellent 101 Not So Random Encounters: Winter, though neither book is required to run the module. SDiW is intended for 1st level PCs and covers a surprising breadth of places – a total of 69 hexes await exploration of a truly gorgeous full-color map that depicts the snow-capped mountains, glaciers and stable permafrost. In this frigid land, remnants and obelisks of the old Nee’Qan culture, lost to the sand of time, stand as monuments to other days, while the freezing cold and copious amount of snowstorms render survival a challenge – even before strange, lethal gasses and magical effects enter the fray. Temperature, random encounters and hazards are provided for your convenience to drive home that this place is not particularly cuddly.

The whole region, from the frontier’s towns that provide ample hooks and statblocks, to the mysterious amber scepters one can find and the massive monoliths, the whole hexcrawl is an excellent exercise in indirect, sandboxy storytelling and atmosphere – as a whole, I was reminded of the classic Savage Sword of Conan issue featuring a monolith and an infamous Khitan duke named Leng, crossed with the atmosphere of Dark Soul II’s Frozen Eleum Loyce – and honestly, I was truly intrigued by Bret Boyd’s offering here – including an uncommon, corrupted outsider from the higher planes as a dread hunter in the snow and the exploration of these strange places, the first module blows me already away and makes for one of the most atmospheric first level modules I know – if anything, the module left me wanting more…this atmosphere can carry a module of thrice the size allotted.

The second module herein brings us back to the wonderful institution for the series, the legendary Ruins Perilous, Questhaven’s post-modern dungeon, which acts as a proving ground and means to climb the social ladder in the adventurer-run legendary city. While before, we had themed regions, Mike Welham actually managed to do something truly unique – for this level of the dungeon, intended for fifth level PCs, has a very strong leitmotif I usually don’t like – elements. As often, random encounters can be found within, but here’s the thing: The level has an outer ring – from said ring, elemental-themed room-sequences exist, allowing access to the center of the level.

The absolutely unique aspect here is that the module manages to depict a sense of fantastic realism – each of the environment-themed gauntlets actually also has a room that features related materials to pass the respective trials and tribulations…which may actually double as traps in the hands of the unwary: A tissue-regeneration trap can, for example, be rather lethal when applied to creatures aligned with the energy type. So, what’s the deal? Beyond mephits, the dungeon is all about the powerful living storm bound within the complex and gathering the missing faces of the cube of elemental harmony, which can ultimately be used to bring reason back to the powerful elemental entity. The fantastic realism utilized here is compelling and well-made.

The third module, penned by Nicholas Milasich for 7th level is darker – the House of Butchered Manflesh, which is a dark module with an intriguing twist: The PCs will investigate a mysterious and sullen captain and a trail of pigs into the sewers, where the tragedies of a flesh-themed dungeon, complete with mite kitchens loom; beyond deadly slaughtering machines and the powerful derro butcher, the dungeon seems to have a straightforward “man are meat”-theme, with an evil mistress at the helm – but there is a twist to all of it: You see, the lady of the house is actually a deadly hag who uses wagers and her considerable polymorphing powers to keep their servants in line…and keep a twisted control over the people under her “employ” (read: slavery). Now before you expect something grimdark…turns out that the mistress is screwing over the cannibals to which her meat is delivered: She polymorphs pigs into humans and sells them to the creatures below – her operation must be stopped, sure…but the consequences may well provide even more issues for the PCs in the future. Different in tone and with an interesting twist, this module, while the most conventional of the three in structure, its creative themes make this yet another winner.

Editing and formatting are very good: Apart from minor formatting hiccups, I noticed no significant glitches. Layout adheres to Rite Publishing’s two-column full-color standard and the magazine sports a significant array of drop-dead gorgeous, original pieces of full color artwork and the cartography by none other than Tommi Salama, is glorious, though I wished we got the usual high-res jpgs and player-friendly versions.

This installment of Adventure Quarterly is all killer, no filler – from the atmospheric offering of Bret Boyd to Mike Welham’s awesome Ruins Perilous and Nicholas Milasich’s uncommon twist on a horror-theme through the glasses of high fantasy, not one of the modules in this magazine disappointed me – all of them have a creative component, something interesting and evocative that sets them apart. In the end, I am left with no serious complaints, with only the lack of player-friendly maps that were present for all the older AQs being a serious downside that costs this my seal of approval. Still, the excellent modules are very much worth 5 stars and seal material, so yes, I do believe that this is well worth the asking price.

You can get this collection of cool modules here on OBS!