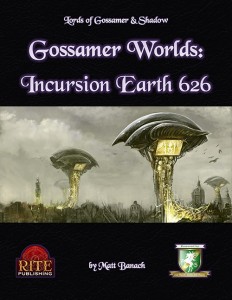 This installment of the evocative Gossamer Worlds-series clocks in at 19 pages, 1 page front cover, 1 page editorial, leaving us with 17 pages of content, so let’s take a look!

Incursion Earth 626 is one of the infinite allotopias (i.e. alternate earths) than can be reached via the Grand Stair – but is a unique one. In 1985, reality cracked – this time not due to earth’s humans screwing it up, but due to an extremely expansionist empire called the “Incursion” piercing the veils of reality. These technocratic conquerors botched something, though, when they arrived in this reality and mankind suddenly was faced with a vast influx of psionic power – from pyrokinesis to uncontrollable telepathy, the sudden rise of powers left the world almost in an apocalyptic state, when Switzerland, for example, paid for its lockdown with utter annihilation, becoming a creepy ghost-country. Just as things began to settle, with the powers-that-be establishing elite-squads of psionics, the incursion attacked.

With brutal displays that annihilated Washington D.C. and Moscow, the Incursion established supremacy over earth, rendering it one of its colonies. Now, two decades later, life remains pretty much normal for the average citizen. Once you’ve gotten accustomed to the shadows and drones, no issues. Unless you are psionically active, in which you immediately become a target for the incursion’s forces…especially if you are a psycher – one of the powerful, almost demigod-level psionicists. Speaking of which – multiple ways to handle psionics and distinguish (or not distinguish) it from sorcery are provided. The incursion’s renegade commander, Tau-Psi-5 receives full stats and beyond the threat of the incursion, the hidden remnants of the erstwhile secret service are creating their own cadre of super-psychers to reclaim earth, while Irkutsk is now the place, where a lot of earth’s psionics are brought – for what purpose, though – none knows so far.

Oh, and then there would be the rise of a new spiritualism, with ancient, strange psychic entities rising, possessing people and turning them into nightmarish creatures…Yes, there is a lot of lethal potential for storytelling.

Matt Banach’s Incursion Earth 626 is interesting, with a special shout out going to the interior artists Tarakanovich, Wataboku, Michael Richards, David Revoy, Justin Nichol, J.J. Tarujärvi – the artworks stand out even in this series and create an atmosphere that reminded me of Death Note’s N as a psychic in some frames, creating a unique visual style. The potential of the world is vast – from teh Incursion’s motives to the obvious potential for ALL kinds of X-men-style narratives, this place sports adventuring potential galore and is well worth 5 stars + seal of approval.

You can get this great Gossamer World here on OBS!
Endzeitgeist out.