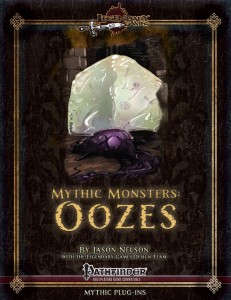 This installment of Legendary Games’ Mythic Monsters-series is 28 pages long, 1 page front cover, 2 pages editorial, 1 page ToC, 1 page SRD, 2 pages of introduction, 2 pages of advertisement and 1 page inside back cover, 1 page back cover, leaving us with 17 pages of raw content, so what do we exactly get here?

Well, let’s take a look at the oozes – which present a unique challenge at mythic levels: Being mindless for one, an optional rule to retain the usefulness/threat of grab (ex) and mythic splitting are covered before we dive into the statblocks – all of these initial options are more than viable and fit the theme.

At CR 8/MR 3, Mythic black puddings may modify their reach for more attacks (great idea – more amorphous being should have that one!) and, while resistant to fire, are covered in an oil-like slick that can easily be ignited – yeah, picture that black blob dissolving AND burning your allies, leaving slime-trails of flammable material behind… Speaking of deadly – what about the CR 16/MR 6 Mythic Carnivorous Blob and its ability to negate temporarily its cold vulnerability. The blob can also spit globs of its matter and soften/liquefy bones of adversaries. Ouch!

At CR 10/MR 4, the mythic version of the deathtrap ooze can duplicate ranged traps, complex traps and even subdivide itself into various connected traps – which an enterprising DM can craft into a truly fearsome encounter! Glorious – now say again that oozes can’t make for complex set-ups. The CR 5/MR 2 mythic electric jelly gets a reflexive shock and can emit electric pulses. At CR 4/MR 1, mythic gelatinous cubes get the adherence special quality to have weapons stuck to them. Solid.

Mythic Gray oozes at CR 5/MR 2 leave trails of caustic slime behind and corrode non-mythic items exceedingly fast and even extend their camouflage to include blindsense etc. The CR 8/MR 3 Mythic Hungry Fog can cause its victims to become shaken by shapes half-glimpsed and even duplicate the effects of phantasmal killer thus. These fogs can also kill foes and benefit from the death of engulfed adversaries. Mythic ID Oozes (CR 7/MR 3) can emit poisonous psychotropic vapors alongside caustic trails, adaptive camouflage (again) and may power its confusion causing-abilities via mythic power.

The Mythic Magma Ooze’s lavabody and burning aura are neat (CR 9/MR 3, btw.), but its ability to kind of-detonate itself, entangling nearby foes in burning lumps of stone and its lava bomb-emitting capabilities are what make this one for me. The CR 6/MR 2 Mythic Ochre Jelly heals when dealing damage and can emit poison-delivering tendrils and noxious fumes. Nice! The CR 5/MR 2 slithering tracker’s mythic version increases its con via blood drain and yes, it finally actually gets good at TRACKING. Prey. fast. Thanks! That one always annoyed the heck out of me.

The CR 7/MR 3 white pudding’s mythic brother can make itself a fountain of acidic, cold death and also can burrow through snow/ice and turn itself into a kind of living avalanche. Very cool!

As has become the tradition, we also get a new creature, this time the CR 12/MR 5 quicksilver ooze that may auto-accelerate itself, block attacks, melt metal, can choose which damage type to deal (among the base damages) and that’s not all: The ooze can diffuse elemental attacks to adjacent squares and duplicate the enchantments of weapons that hit it. Oh yeah, movement rate 60 feet. SUFFER! Glorious!

Editing and formatting are once again very good – I didn’t notice any significant glitches. Layout adheres to Legendary Games’ 2-column standard and the two pieces of original full color artwork are glorious. The pdf comes with the good type of hyperlinks, but unfortunately no bookmarks – a comfort detriment here.

On the nitpicky side, once again ecology-sections are missing from some of the statblocks – gelatinous cube, gray ooze, id ooze, ochre jelly and the new quicksilver ooze all lack this component of the statblock – which while not crucial, represents a detriment. Jason Nelson delivers a cool array of oozes with a surprisingly diverse set of cool signature abilities that not only make oozes more diverse, it makes them actually FUN to ooze. Yeah bad pun. Sorry, couldn’t resist. The oozes are cool and honestly, I’ll rather use them than their non-mythic brethren, especially since non-mythic oozes tend to be boring for the DM to run. This, these oozes aren’t. That being said, I think a slight bit more content for some, a signature ability here and there, would have been enough to make this truly legendary. Speaking of which – know what seems to be a running theme? The mythic versions are cool – the unique creatures are stellar. Personally, I’d love to see much more NEW monsters by LG!

All in all, in spite of the lack of bookmarks/partially missing ecologies, a pdf that gets my wholehearted recommendation, especially and additionally for even non-mythic DMs who want to scavenge some abilities to make the standard oozes less bland. Thus, in spite of its minor flaws, I’ll settle on a final verdict of 4.5 stars, rounded down to 4 by a margin.

You can get these neat oozes here on OBS and here on d20pfsrd.com’s shop.

There is also currently a KS running to get all the mythic goodness in print – check it here!