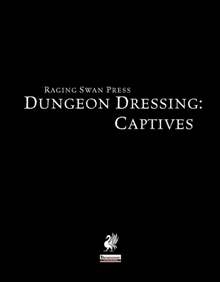 This installment of the Dungeon Dressing-series clocks in at 11 pages, 1 page front cover, 1 page advertisement, 1 page editorial/ToC, 1 page SRD and 1 page back cover, leaving us with 6 pages of content, so let’s take a look!

The pdf kicks off with a d20-table of 20 entries, each of which depicts a captured adventurer (after all, these folks are likely candidates for delving into dark places like dungeons): The captives are in dire predicaments – whether a paladin starved to near-death in an oubliette, a druid, confined to cell and trying, with bloody nails to escape the cell where the poor druid’s animal companion’s pelt still lies to cells scribbled with perfect astronomical charts – the captives depicted here have gone through various ordeals. What slightly bugs me is that only core-classes are covered here – no traumatized witches, inquisitors, cavaliers or summoners here (how do you chain an eidolon?) – a lost chance, even though the table otherwise is nice.

The second table, once again spanning 20 entries, is devoted to merchants and their entourage and thus feature ex-slavers, merchants of rare eggs and even bakers missing their children – a lot of narrative potential here as well, also via uncommon merchants like bibliophiles or purveyors of relics. What’s slightly weird is a tonal shift – whereas the first table often focused on the state of the prisoners and the ordeals they’ve suffered in captivity, this second table is very focused on how the unfortunates ended up in their predicament. I’m not saying that’s wrong, just that it’s something to be aware of.

The third table only spans one page and details captured evil humanoids – they can be of any race and unlike the former table, no suggested race/class/level-combination is given, which probably could be considered a bit problematic: For one, different races adhere to different nomenclatures, at least in my game. Secondly, the class information could prove useful, as could the social peculiarities inherent in most evil humanoid races -strange means of capturing drow or duergar might point towards them being shapechanged etc. It should be noted that, once again, the nature of their predicament becomes the focus, with the generic race-neutrality making the description of the NPCs impossible. All in all a solid table for what it is, but one that I don’t consider particularly useful.

The final 20-entry-strong table, once again covering 1 page, contains hooks and complications – which may be cool and valid, but which unfortunately directly contradict what was written before – one cannot be in tatters and at the same time in a flawless tunic, for example. Another complication has one of the PCs wander too close and be grappled by the prisoner who threatens to snap the PC’s neck – now rules-wise, this does not work: The PC in question would not be helpless, i.e. not coup-de-grace. Furthermore, the prisoner would have to properly grapple the PC and probably pin him/her. It’s unfortunate, but this is DM-railroading when used. Per se, the entries are cool, but they don’t work with the other tables, rendering this table’s use in the context of the pdf, rather moot.

Editing and formatting are top-notch, I didn’t notice any glitches. Layout adheres to RSP’s two-column b/w-standard and the pdf comes fully bookmarked and in two versions, one optimized for the printer and one for screen-use.

Author Josh Vogt provides some nice tables here – some of these predicaments had me actually go “ooohhhh, nasty” at the ordeals. The respective characters are per se interesting captives…but this pdf, in spite of its virtues, in spite of its well-written characters, fails for me. The evil humanoid table doesn’t work for me due to being too generic – in order to work, it would require a supplemental table to add further details. Speaking of which – that’s an issue here – essentially, we’d require a cell-generator for this pdf – manacles, bunk beds etc. – something like that, for apart from the first table, the others lack this information. Were it not for the first table, I’d consider that “by design”, but as provided, I can’t help but feel that a DM-cheat-sheet page of manacles, predicaments etc. would have helped here, alongside minor tables to supplement the big ones. And then there is the fact that the complications often contradict the respective entries as provided for the prisoners – the whole organization of this captive generator is curiously not really adjusted to fitting together. The individual entries are not bad, but as a captive generator, this pdf unfortunately fails and as just a list of captives to populate your dungeon, it also lacks some information that would have been helpful. While by no means bad, I thus have to take these shortcomings into account. Hence, my final verdict will clock in at 2.5 stars, rounded down to 2 for the purpose of this platform.