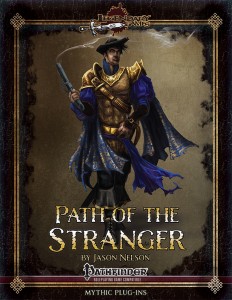 Now first things first – unlike the previous installments in this series, here, we have a mythic path that is very much intended to be used by the PCs, not their opposition, so that would be one change of focus. The stranger itself is an iconic concept and if the basic renditions of the trope it is based on is not readily apparent to you – this mythic path is about skirmishing and subterfuge, both mundane and magical. Tiers net +4 Hp and the path offers a selection of 3 stranger maneuvers: Fleet Charge lets you expend mythic power as a swift action to move up to your speed, while also executing a ranged or melee attack at full BAB at any point during the movement. painful reckoning allows you to use an immediate action to convert 5 points of damage taken per tier to nonlethal damage (or ignore nonlethal damage of said amount) and adds a luck bonus buff to AC/atk equal to 1/2 tier, to damage and Intimidate checks versus said foe equal to full tier. Surprise strike lets you expend mythic power as a swift action to execute a melee or ranged attack versus a target within 30 ft., which treats the target as flat-footed and adds tier to damage.

Of course, the pdf also provides a diverse array of path abilities gained at 1st tier and every tier thereafter, with some minor overlap with marshal, guardian and trickster. The path abilities allow for the learning of more stranger maneuvers, so no, you’re not locked into an either-or-situation regarding the base path ability learned. Of course, the abilities themselves are diverse – but how diverse? What about calling in favors from contacts (with full synergy for the rules from Ultimate Campaign), gaining temporary followers or even a financial aid from your associates? Want to go Zorro on foes? Nonmagical signature arcane marks that may act as distraction to hide or to demoralize foes represent just that. What about using firearms and bombs to create dispel-effects against mind-affecting effects? And yes, including a valid range-related wording. Better dodge with retributive attacks OR diverting attacks to adjacent targets. Free action reloads powered by mythic power are also interesting.

Belonging to two orders (or flexible access to an alternate domain) to represent changing allegiances is pretty nice, as is the option to gain memory lapse as an SP, while ranger strangers may grant woodland stride to allies. Hearing heartbeats akin to Daredevil and the resulting repercussions for Sense Motive. Going Conan for the purpose of Stunning Fist/Improved unarmed Strike-punching creatures larger than you would be pretty neat as well. Automatically succeeding balancing on narrow edges also makes sense to me regarding the concept. Mythic upgrades for grit, ki and panache and Batman-style nimble falling gliding can be found in these options as well.

What about an ability that allows you to shroud your name and identity in mystery, making it hard for other creatures to recall your presence or an option to demoralize foes seeking to scry you and adding misdirection-tricks to those foolish enough to try to spy on you? Better improvised weapons and combining withdraw with disarm can be found herein as wel as improved tricks regarding resolve. One of my favorites lets you learn adding proficiencies with exotic weapons via short training as well as allowing you to treat the weapons as not suffering from detrimental qualities or adding beneficial ones to the weapon used for a massive array of odd combinations and weapon-tinkering. I also enjoyed the wall running options alongside the tricks to blend with and move through crowds.

Among the 3rd tier abilities, demoralizes to react to failed attacks on you while fighting defensively, full-blown batman cape-gliding with Wingover and a crazy-prepared trick are part of the fray, though I wished the latter had a caveat for not being able to duplicate unique items like specific keys. The abilities also cover being able to use suggestions while hidden from targets. Help and immunity versus emotion-effects and pain-effects and using language-dependent effects versus the caster make for solid tricks that fit well within the tropes covered. Counter-scrying, via the aptly-named “Watching the watchmen” also is neat. Beyond the sample suggested builds, the 6th tier abilities deserve their power – what about being able to return to life upon dying when healed within a certain amount of time, provided your body remains? Becoming, quite literally, an incorporeal ghost rider. What about going, Kill Bill-style, on a roaring rampage of revenge, allowing you to return to life if slain AND temporarily gain qualities of friggin’ revenants in addition to the quarry etc.-tricks this nets anyways? OUCH! Oh, speaking of which – the capstone also nets the stranger immunity versus all movement-impeding conditions and options that force movement, including feats and maneuvers – fitting!

Editing and formatting are top-notch, I noticed no glitches. Layout adheres to Legendary Games’ beautiful 2-column full-color standard and the pdf comes with copious amounts of original full-color artwork, including some gorgeous 1-page pictures. The pdf comes fully bookmarked for your convenience.

Jason Nelson has a field day here – if you have read as many of his designs, you’ve come to expect his trademark coherent crunch that tackles complex concepts, but sometimes, he goes above and beyond it – this would be such an example, one where the design gleefully marries unobtrusive pop-culture references with superb crunch that actually manages to properly cover the concepts it is supposed to cover. This mythic path is glorious, with no bland numerical escalations and a vast multitude of utterly unique path abilities that fit the concept perfectly, while remaining distinct and above the purview of what can be achieved with mythic feats. Additionally, none of the abilities herein, while universally solid and powerful, felt broken to me and so far, I found no issues worth speaking of in this great addition to the mythic rules. Obviously, my final verdict will represent this excellence, with a final verdict of 5 stars + seal of approval.

You can get this cool mythic path here on OBS and here on d20pfsrd.com’s shop!