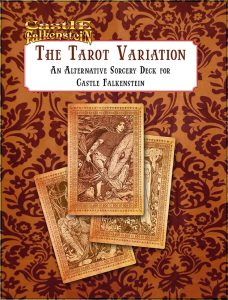 This little pdf clocks in at 6 pages, 1 page front cover, 1 page editorial, 1 page advertisement, leaving us with 3 pages of content, so let’s take a look!

So, this pdf very much represents a substitution – Castle Falkenstein’s default mode to generate magic is obviously that of employing a standard playing deck of cards, which makes sense in two ways: For one, pretty much every household has one. Secondly, and more importantly, dice, in the era emulated by the game, were the common man’s playing tool. A proper lady or gentleman would obviously play with cards. It is a cultural convention, much like playing bridge and the gender-divide in “proper” society between drinking brandy and sherry.

Anyways, this, at least in Europe, does present an interesting occasion to watch the changing of values ascribed to cultural artifacts in action: At least where I’m coming from, playing cards lack the luster and glamour of high-stakes poker games. Instead, the first association most people have is that of old farmers and craftsmen sitting down at the rural pub to play a game of Schafkopf or a similarly simply game, while drinking beer and discussing politics, complaining about wives, sons, daughters – you get the idea. The glamour and bling once associated with cards, at least as far as I’m concerned, has not made the transition to our contemporary culture.

Now Castle Falkenstein is a very immersive game once you understand how it works; but the clash of connotations of the cultural artifact employed in play with the assumptions of the game does present the experience of a disjoint. Insert this simple little pdf. Before you start: Yes, I am very much aware that the heyday of the use of Tarot began pretty much at the end and after the era of Castle Falkenstein, but at the same time, the allotopia it represents does feature ample fey and supernatural beings, so it makes sense to me to assume that the Tarot deck gained traction sooner.

One more thing: If you’re even remotely interested in occultism, you may know that there are different Tarot decks – this pdf assumes you’ll employ the most commonly used and widely dispersed deck, the Rider-Waite-Smith deck. If you have no idea what I’m talking about here, but own a tarot deck, chances are extremely high that you’ll have just that.

So, what are the mechanics? The playing card suites are replaced with tarot suites – Hearts with Cups, Spades with Swords – and the emotional harmonics are also included in the table. The minor arcana values can similarly be gleaned from a table and should present no challenge regarding implementation for anyone.

And this is where things get really interesting: As anyone who ever held a deck of Tarot cards knows, the deck does feature the suite of Major Arcana, 22 numbered cards, ranging from values 0 to 21 that have unique meanings and symbolisms. If you’ve played the fantastic Persona-JRPGs, you’ll know these from your social links. There are two ways of handling major arcana – first, the simplest choice would be to treat them as a full draw from the Sorcery Deck, though one that does not provide Power Gathered, and one that results in the usual 2-minute cooldown. This is particularly suitable for games that wish to emphasize the unreliable nature of magic and that aim for a less magical style of gaming.

The second, more chaotic and interesting option would be to allow a sorceror who draws a major arcana card to continue drawing until a minor arcana card is drawn and added to the hand, gathering power. The host may, obviously, limit the total amount of major arcana cards that can be used in conjunction with a given spell. This option is obviously best for games that want to emphasize the somewhat chaotic, but powerful and unpredictable nature of magic. As a slight presentation guffaw: The table noting the effects of the major arcana cards precedes this text, but the text ends noting that the effects are as follows – in layout, that was obviously switched around. And yes, that is, at best, a cosmetic hiccup.

Now, what about those major arcana effects? Well, the fool’s effects would be pretty much the most pedestrian, mirroring the effects of a Joker in a regular playing card game. The other cards are significantly more interesting: The magician, for example, grants control over one knot of energy, allowing the sorceror to convert the suit of a card to the suit of the spell. Similar card suit conversions, modifications of numerical values, harmonics entering the deal…very interesting. Oh, and selfish spells may backfire in the face of the justice card, you may attract unseelie (or seelie) farie and quicker gathering can all be found here. Basically, instead of having one unique effect based on cards, you have 22. This very much changes the dynamics of Castle Falkenstein for the better, for it makes casting as a whole more evocative, exciting and versatile – it adds a ton of spice to the proceedings.

Editing and formatting are top-notch – apart from the sequence, hiccup (which is cosmetic at best), I noticed no glitches in either formal or rules-departments. Layout adheres to an easy to read full-color two-column-standard, with the massive major arcana table being one-column. The pdf sports a nice piece of full color art beyond the front cover.

J Gray’s Tarot variation is, dare I say, my dear readers, a stroke of genius. For one, we associated Tarot more with the era Castle Falkenstein emulates than regular playing cards, so that, in itself, would already constitute an improvement regarding immersion. However, and that is more important to me, the inclusion of major arcana cards with a ton of unique effects makes spellcasting as a whole infinitely more interesting, less predictable, and ultimately, more fun. Now here’s the thing: This costs a single buck as per the writing of this review.

It is perhaps one of the best Dollars you can spend regarding RPGs. This humble pdf is GENIUS. I mean it. In 3 pages you get a system that is so easy to implement, it can be done by anyone. You need one page of those three printed out, that of the major arcana effects. That’s it. This little pdf does not only provide ONE really, really good system that not only enhances the immersion in the game, but also represents a glorious expansion of the rules. You actually get TWO. No matter what type of game you’re playing, one of them will fit the bill and oh boy, both are extremely interesting and enhance the game in a pronounced and amazing manner.

This is, in short, perhaps the best buck you can spend to vastly improve a single system, to breathe fresh air and versatility into a game, that I have seen in a long, long time. The simplicity is genius, the price can’t be beaten, the results of using this and the joy it brings go far beyond what the humble price tag would make you think. This is a true gem of RPG-design and bespeaks the author’s palpable love for the system. if you’re playing Castle Falkenstein, then this is very much an absolute no-brainer. Concisely presented, thoroughly amazing and exceedingly concise, this receives my EZG Essential-tag for Castle Falkenstein. Moreover, the easy integration, added variety and fun this brings to the table make it one phenomenal offering, well worth a final verdict of 5 stars + seal of approval and qualify this as a candidate for my Top Ten of 2016 for being exceedingly impressive from a design perspective. Make your game more magical NOW and get this gem!

If you play Castle Falkenstein, you NEED this gem – it can be found here!