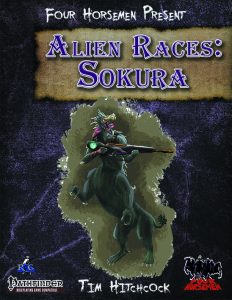 This installment of the Four Horsemen Present-series clocks in at 10 pages, 1 page front cover, 1 page editorial, 1 page SRD, leaving us with 7 pages of content, so let’s take a look!

The sokura’s depiction as a race is more intriguing that one would assume – featuring post-existential philosophy as well as perfect pitch, these somewhat feline, quadruped creatures are akin to centaurs with rhinoceros-like skin. Their tribal culture is intriguing in its blend of science and a scoietal structure generally codified as primitive, creating a distinct area of tension between the two poles and generating thus interest and narrative potential in a surprisingly concise depiction that left me curious for more details regarding the culture of the sokura, which is further enhanced by a kind of infatuation with weaponry and a polygamous and polyamorous structure to their relationships. Similarly, the blend of avian, feline and centaur-like traits is intriguing.

Racial trait-wise, Sokura may choose one ability score to which +2 is added, are four-legged with a base speed of 40 ft. and +4 to CMD, always treat Perform as a class skill (and gain +2 to said checks) and are treated as though subject to know direction while on a planet. This one imho should have been codified as SP or Ex and I *assume* from the text that this does not work while in space, but I’m not sure. Sokura can go up to 3 days sans water, 10 sans food without having to make starvation checks. They may also, as a standard action and a Perform-check versus DC 15 share a teamwork feat with 1 ally for 1 round per HD they have…which is pretty powerful for a racial ability. They are proficient with sokura blaster rifles. As far as alternate race traits are concerned, two are provided: Offworlder sokura replace the food/water-related hardiness with +2 to Diplomacy and +1 known language. Prodigy sokura replace the teamwork feat sharing with the Technologist feat.

Thankfully, the race comes with random starting ages, height and weight (with entries for both regular and offworlder sokura) and the race is smart in that it codifies sokura as medium, thus avoiding the large-creature-issues and undersized weapon-requirements of the centaurs. The pdf sports 3 racial feats: Survivor provides temperature adaption as well as a further increase of the time during which they do not need to eat/drink/etc. The other two feats are Sixth Sense, which nets blindsense 10 ft. (with a prereq of Blind-Fight) and its bigger cousin, which grants blindsense 30 ft. and blindsight 5 ft. The race also provides FCOs for bard, cavalier, fighter, gunslinger, ranger and skald – no complaints there.

The pdf also provides racial archetypes, the first of which would be the Honored Nomad cavalier, which modifies proficiencies to cover simple and martial weapons, firearms, bucklers and light armor and are locked into the order of the nomad at 1st level. Instead of a mount, these sokura get +10 ft. movement as well as Endurance. Speaking of the order of the nomad – the order provides +2 to AC versus AoOs from the challenge, increasing +2 for every four levels the cavalier has. Class skills are Perception and Survival. At 2nd level, the order increases starting attitude by +1 and penalizes the Bluffing against him from friendly or helpful creatures. At 8th level can, as an extraordinary ability, calm emotions of a creature as a full-round action, with a duration that is only maintained while the sokura maintains the expenditure of the required action. Making the save versus the ability offers a means of increasing attitude of the creature affected, though the spamming of the ability is impossible due to a hex-like once per 24 hours per creature caveat. At 15th level, Diplomacy can even be used sans shared language and foes are penalized depending on their attitude towards the cavalier. Over all, a cool idea – tying attitudes with combat-relevant abilities is a pretty rare approach.

The Mind Singer skald replaces Scribe Scroll with 10 ft. per class level via telepathy – but only one creature at a given time. Similarly, the raging songs granted by the archetype are hive-mind themed, enhancing the Will of the listeners and providing a telepathic song that grants telepathy to allies as well as sharing teamwork feats at higher levels. 10th level allows for the touching of foes to detect thoughts (immediately 3 rounds of concentration) – nice. 14th level does overshoot the target a bit for less powerful campaigns, allowing for the sharing of a single skill or feat, though at least targets still must meet the prerequisites, which prevents this from being OP. Odd: The honored nomad and mindsinger’s headers sport different formatting choices.

The pdf provides two new weapons, the clay shard blades and the sokura blaster rifle (with a nice b/w-artwork). The pdf concludes with advice on how to use the sokura and a sample CR 1/2 vanilla skald (sans archetype), including the neat cover artwork.

Editing and formatting are good, though not perfect – beyond the inconsistency regarding header formatting, this pdf has an odd layout-glitch: The first page sports the standard color background…and about half of the page instead has a white background. This is a cosmetic glitch, though. Layout, apart from aforementioned glitch, adheres to a 2-column full-color standard and sports solid artwork. The pdf comes fully bookmarked for your convenience.

Tim Hitchcock’s Sokura are an interesting race – though one that does deviate in very minor instances from some established formatting choices. When I looked at the cover, I expected a mess – quite frankly, I have not seen a single quadruped race that truly works…or manages to address the ladder/large-creature-issues properly. The sokura, by virtue of ignoring their extra limbs for all but their base speed, manage to avoid the obvious multiple-arms- and size-issues, which is smart. More importantly, the tidbits we get on their culture actually are intriguing and exciting – they feel ALIEN and still sensible.

The tactician-lite racial ability may upset games that are predicated on more conservative racial stats, but at the same time, the race, as a whole, can be considered on par with the more powerful races like tiefling, aasimar, etc. Personally, I would have codified the ability-types of some abilities a bit differently, but that can be chalked up to mostly personal preference. So is the race good? Well, it’s better than the brevity would suggest – it manages to depict a race that feels unique and more than a collection of stats an crunch – which is ultimately the most important component of a race and more than I can say about many racial supplements. Still, personally, I had a strange feeling that the sokura were intended as a psionic race – the mind-song and concepts feel like they could have easily tied in with Ultimate Psionics, considering how the rules in said book have established, precise rules for psionic collectives. A psionic variant at least would have been great to see, though I will not penalize the pdf for the omission of the like.

In the end, this is a nice, if brief, racial supplement that manages to rise above the average racial supplement, but also falls short of the potential of the race, mostly due to the brevity of the book. My final verdict will clock in at 4 stars.

You can get this unconventional, if brief race here on OBS and here on d20pfsrd.com’s shop!