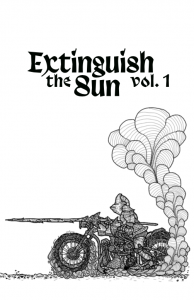 The first installment of the „Extinguish the Sun“-zine clocks in at 16 pages, 1 page front cover, 1 page back cover, leaving us with 14 pages of content, so let’s take a look!

The rules-set assumed in this supplement would be B/X, which means that it operates relatively seamlessly with Old School Essentials, my current go-to presentation on the B/X-rules.

So, this supplement assumes a kind of Mad Max-y/Tank Girl-y setting that is somewhat fantasy-post-apocalypse like; there is a subdued, slightly allegorical quality that is particularly prevalent in the environment depicted in the beginning of the ‘zine, namely the “City in Chains” – a rotting country, where the king watches from his sealed tomb, where are representatives of castes are caricatures or perversions of their erstwhile craft. The hazy notion implies that you have to want to get there, or you won’t find it, forgetting it; this dreamlike haziness is the strongest component of this write-up, for it adds a surreal aspect to the place. Chefs are blinded and have seared hands from being forced to check temperature by hand; the engineers are paranoid creators of strange weaponry, for there can only be a few, and to get a spot, you have to kill one of them; the generals rule and are decadent…you get the idea. Priesthood and taxmen are covered as well, and as a whole, we get an impression of a city rotting at the seams. It is an interesting piece of writing and setting, but one that suffers from its indecisiveness: If it is allegorical and surreal, it could go much farther and doesn’t; if it’s primarily supposed to be plausible, it feels almost like a caricature of such a place. The article was an enjoyable read, and certainly can inspire, particularly if you’re less jaded and versed in such literature or concepts than I am.

After this, we get the two new classes – both fit all relevant information on one page, and indicate with a handy scissor item that they can be cut out of a print version; the Marksman is an 8-level class with Dexterity 9 as prerequisite and Dexterity as prime requisite, who may not wear armor, but may use any weapon. The class gets d8 HD, uses the fighter’s XP-progression and (TH)AC0 progression, but sports a unique save progression. They begin play with an ancestral firearm, and may execute stunts. These must be announced before an attack roll is made, and apply a penalty to the attack. The pdf encourages making more than the 4 presented. These include doubled range at -1 to atk, save or die due to a headshot (if you roll a natural 20 only), ricochet and rapid fire. Weird: The class caps at level 8, explicitly says so, but applies the header “Reaching 9th Level” to a section that pertains to their capstone level. All in all, a decent take on a super-stripped down version of Pathfinder’s gunslinger. Okay, but doesn’t win any prizes.

The Librarian is much more interesting: This class has a prime requisite of Intelligence, but needs a minimum Wisdom of 9; it spans 14 levels and gets d6 HD; they may use any weapon, but no armor.  They use the thief’s XP-progression, but their (TH)AC0 only improves from 19 to 17 at 6th level, and to 14 at 11th level. Their “attract followers”-level is 11th; the librarians are conceptually awesome: You may not (necessarily) know how to read, but you know of the importance of books – that’s why you wear them on your body the whole time, clad in a thick coat of books that works as chainmail armor. This is a fantastic concept, well-illustrated in a one-page artwork by Evevlyn M. Downside of wearing so many book: You take double fire damage. What do you get for that? Well, at 4th level you can smell books, automatically detecting them if passing within 10 ft. of one; at 10th level, you get a 5-in-6 chance to passively notice secret doors. Their death/poison save starts off at an atrocious 16, and the other saves aren’t particularly great either. As always, HD are capped at 9th level, with further levels providing +2 HP. And yes, that’s unfortunately it. No ability to cast from the books; no papercut abilities; no paper-plane, no magical origami. Just a dude wearing books as armor. This is the biggest, almost criminal waste of an awesome idea I’ve seen in a while.

The pdf then provides a table of 9 firearms with their stats, as well as three general templates of a sort; the damage values and range seem plausible, as do the prices. While the table is concise and shouldn’t provide problems for experienced GMs, the tables also has a “Notes”-column that e.g. lists: “a, m, s, 2h, L”; particularly since quite a few GMs I know switch between rules systems frequently, getting a brief explanation here would have been prudent.

So yeah, so far, this ‘zine may have been rather underwhelming, but then comes a great reason to get this supplement for its low price: Vehicle rules that are simple and elegant. You generally don’t need to check when driving, just when attempting a special maneuver. You check by rolling 1d10 + your Dexterity adjustment versus a number that is, at the highest 10 – essentially a DC. You check a small table, which lists different numbers for going slow, medium or fast. The rows denote conditions like the area being off-road, flooded, etc.; Swerves, turns, halts and controlled skids are defined, and the vehicle engine provides stats and costs for bikes, compacts, regular and large vehicles, including #1 of seats, Hit Points, cost, base speed, etc. Oh, and they have upgrade slots! 13 upgrades are provided, which range from being solar-powered to having a mounted cannon. I genuinely enjoy this engine; it is by far the best component of the pdf as far as I’m concerned, and considering the low price point, might well warrant getting this for you all on its own. Then again, I wished the supplement had provided more upgrades, covered e.g. melee weaponry, etc. There is a lot of material that the engine could use and is missing, including suggested damage values for being run over.

Editing and formatting are good on a formal and rules-language level. Layout adheres to a two-column b/w-standard with some neat pieces of original b/w-artwork that I really enjoyed. The pdf has no bookmarks, which constitutes a comfort detriment.

Chance Phillips’ first “Extinguish the Sun”-‘zine started of in a solid manner; the  write up of the city, while not exactly novel, might be enjoyable for some less jaded people out there; I liked it well enough. However, much like the two classes, I feel it didn’t go far enough with its ideas. The classes are duds to me, with particularly the librarian’s cool concept deserving better: The increased HD over the thief doesn’t pay for the lack of reasonable stuff to do and the deadly Achilles’ heel. The vehicle rules, though? They are genuinely well-crafted. I wished there had been more of them, for if this had used one or two of its pages more to make them work, we’d have a system I’d wholeheartedly recommend. If you’re looking for the like, this will be worth the $2.00 price-tag for you; if not, then…well. Not. As a whole, I consider this a mixed bag that sports some duds, but also a fun and well-executed subsystem. As such, my final verdict will be 3.5 stars; and due to the low and fair price point, I’ll round up for this one, if barely.