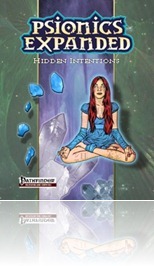 Following the format of the series, we get a short introduction to the serialized release that is Psionics Expanded and then delve right into the new Core-class, the Cryptic. Crunch-wise, the class gets d8, 4+Int skills, 3/4 BAB-progression, up to 128 Power Points and access to up to 20 powers of to 6th level. But what are they about? Cryptics harness the hidden patterns of reality and manipulate them by having them show up as tattoos – their manifesting is harder to identify by other classes, but they can’t suppress the additional manifestation of the pattern that accompanies their casting. They can use the mastery of the pattern to improve their defences a limited amount of times per day and also gain e.g. trapfinding, trapmaking and similar roguish abilities. When the cryptic focuses, she can also disrupt the pattern of foes of a type she chooses at the time of focusing via a black ray. Cryptics, due to their insights in the patterns of reality, also get special talents called “insights”, one at 2nd level and every 2 levels thereafter, of said talents a total of 26 different ones are provided, lending to quite a variety of choices. While the obvious enhancements of the ray they can shoot are there, the cryptic also gets some rather intriguing abilities that distinctly set the class apart from its brethren – one of the insights, e.g., lets the cryptic and his allies temporarily bypass traps without setting them off – now if you don’t get some rather cool tactical ideas for that one, I don’t know what will – imagine the dastardly trap-cluttered bases an NPC (or the players!) can easily create or a chase of a cryptic through a trap-riddled dungeon. One of the very intriguing options also halves the healing foes hit by your ray receive. Oh, have I mentioned that cryptics may fold traps into small patterns an throw them into unoccupied spaces of up to 30 ft. away or even redirect a trap’s effect at foes and repair the damage done to the pattern of allies, granting them minor healing capabilities and at 16th level even the ability to bring back the dead. Of course, they can also opt to learn ranger traps and a whole page is devoted to them. It should also be noted that the class has not one or two, but a selection 8 different capstone abilities to choose from – now if that’s not nice, what is?

After this new class, we are introduced to new options for the core psionic classes: Psions get the mindbender advanced discipline bent (ha ha) on enthralling and subjugating foes via Telepathy. Wilders get the new chaotic surge, which may provide power, but also weaken the wilder and prove a quite high chance of enervation, while the Efficient surging option reduces the amount of power points a power costs instead of increasing the level or augmented output. The warping surge can increase allies’ caster level and decrease the one of the foes close to it.

Psionic archetypes are also part of the deal and the very first one is already a winner: If you’ve read my other PE-reviews, you’ll know how much I loved the reimagination of the Aegis and the first archetype makes me happy indeed: The Aberrant does not use an ectopic suit, rather modifying and mutating the body into new forms – eyestalks, stingers, poison and even a protective shell are part of the 12 new customizations for this creepy archetype. The ectopic artisan on the other hand blends the powers of the shaper and artisan, manipulating ectoplasm and creating astral swarms to do his bidding at the cost of less power for the astral suit. The Trailblazer, in comparison, is rather boring – it provides 2 new customizations to reflect ranger abilities. The Cryptic gets the pattern breaker archetype which focuses on improving her ray and intimidation. The stellar Dread-class also gets a supplement, the Fear in Flesh archetype, which lets the Dread use the claw/bite powers on a more or less permanent basis and enhance these attacks to carry the powers of fear. The Marksman gets the Kaigun archetype, a kind of psionic gunslinger that has some rather interesting options, like spending power points and expending the focus to gain grit. The Shroud in contrast is a hunter focused on staying hidden while sniping. Two new psionic deeds are also included. Psions can use the new archetypes herein to throw exploding stones, access two disciplines and become better creators. Psychic Warriors get a complex archetype that uses kineticist powers and marries it with martial prowess. The Meditant can be considered a monk/psychic warrior crossover, including increased unarmed damage, while the Protector can be considered a psionic bodyguard. The Soulknife-cutthroat is gets sneak attacks and the nimble blade is rather finesse-focused. 5 talents for the soulknife let the class wilder in the rogue’s territory via evasion, trapfinding etc. and a 1-page comprehensive list of weapon abilities is included for your convenience. Quite cool, the Tactician gets the battle medic archetype, which gains limited access to some of the Vitalist’s tricks and the Vitalist gets the Life Leech, which can share and shift debilitating conditions, while the Miasmic delight in causing sickness rather than curing it. The combat and blasting wilders can enhance their physis via surges and chain their surge blasts respectively.

Core-classes also get psionic options: From the Enlightened Monk to the cerebral infiltrator rogue (who gets 3 new talents and 2 advanced talents to take psionic feats, powers etc.) and then there are the 15 new feats: While some of which, like “Unwilling Participant” overlap with other PE-releases, especially the “Cushion the Blow”-feats rock: As long as an individual is part of your collective, you can hamper the respective attacks on your allies to make them count as if the foe has rolled 1s on the damage dice via an immediate action and even reduce them further by expanding your focus.

After that, we get the cryptic’s power-list as well as a revised vitalist-info – good to see the terminology with knacks etc. streamlined. The powers per say are top-notch and include with everyman one of my player’s favourite powers ever. Special mentioning also deserve the ectoplasmatic grapnel that lest you do Batman/Spiderman-style moves to move enemies and objects to you and can be used in a myriad of ways – the power is longer than a page! From special hiding powers and the ability to launch across the battle-field, the new powers herein are generally well-conceived and none of them felt unbalancing.

Racial favoured class options for blues, dromites, elans, half-gaints, meanads and xephs as well as human are covered for the cryptic class and we also get PrCs:

The Body Snatcher (d6, 2+Int skills per level, 6 levels, 1/2 BAB progression, 4 levels of power progression, medium will-saves) focuses on mind switches and may retain some sort of muscle memory and retain some of the host’s capabilities – a godsend class for recurring villains or great infiltrators and they may even switch minds with their killers, thus granting them one last chance to escape death’s clutches. The Soul Archer (10 levels, d10, 4+Int skills, full BAB, medium ref-save, 9 levels mind blade progression) is essentially a ranged version of the soulknife, complete with arrows that may phase through non-magical terrain like trees, walls etc.

The 16 new psionic items are solid, and especially steampunk-fans and aficionados of Victorian aesthetics will be delighted by the new enchanted monocles. Cryptics get some neat tools of the trade to enhance their own pattern-related abilities.

Editing and formatting are top-notch, I didn’t notice any glitches. Layout adheres to DSP’s printer-friendly 2-column standard and the interior artwork is full-colour and both nice and coherent in style. The pdf comes fully bookmarked. After having delivered two of the best and in my opinion coolest classes for PFRPG in the last two installments, I was somewhat dreading the release of this installment. The Cryptic could have easily fallen into the bland concept of “He’s a rogue +psionics”. I’m happy to report that that’s not the case. Instead, DSP managed to create a class that is distinct and has a whole unique identity and fluff – ever wanted to create a character that can calculate terrain and use freak “accidents” and traps to his/her advantage? The Cryptic might do exactly that for you. And yes, they can fill the rogue’s role, but much like the Vitalist for example, the class feels wholly distinct not only in its mechanics, but also in its fluff and strategies. I’m also delighted to report that the majority of new archetypes ROCK. If you’re following my reviews, you probably know that I’m all for complex archetypes and e.g. the Aberrant and the Kaigun rock! The powers and PrCs are also nice and offer a vast array of new storytelling devices and options. In the end, I’ll settle for a final verdict of 5 stars and omit the seal of approval only because I would have loved to see more options for the Cryptic and Dread-classes. (Hopefully in the compiled book?)