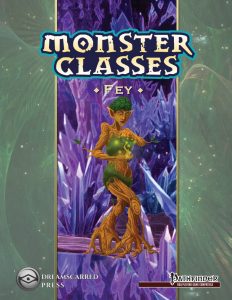 This installment of Dreamscarred Press’ Monster Classes-series clocks in at 12 pages, 1 page front cover, 1 page editorial, 1 page SRD, leaving us with 9 pages of content, so let’s take a look!

Let’s not kid ourselves here – the guidelines presented in the bestiaries aren’t really doing a good job; CR = levels doesn’t work out too well – the concept needs a finer balancing. The series acknowledges exactly this requirement. The solution here would be to employ basically racial paragon/monster classes; instead of progressing in a class, the respective critters advance to grow into the full power array. While SP-gaining is presented as an option, the pdf does champion the approach of exchanging those for spontaneous spellcasting, which is drawn from the druid list, based on Charisma for the emancipated dryad. Testing this material, I’d add my voice to this suggestion – the experience is more versatile and rewarding. The emancipated dryad featured herein adds charm person as a 1st level spell to her list, suggestion as a 2nd level spell as well as deep slumber at 3rd level.

The second monster race/class herein, the satyr, draws arcane spells from the bard spell list, casting them spontaneously via Charisma, but add summon monster I – VI to their spell list at spell levels corresponding the number of the respective summoning spell. But I’m getting ahead of myself.

The emancipated dryad, race trait-wise, are fey with normal speed, +2 Dex and Cha, low-light vision, the option to speak with plants at-will (not italicized properly)…oh, and they are independent of their trees, making them suitable for adventuring.

Racial class wise (which spans 6 levels, just fyi), they get d6 HD, 6+Int skills per level, 1/2 BAB-progression and good Will-saves. 2nd level and every even level thereafter provides +1 natural armor. The class nets simple weapon proficiency as well as use of spears and longbows. At 1st level, they gain a massive +6 to woodcrafting and is always treated as using masterwork tools. 2nd level nets DR 1/cold iron, which increases to 3/cold iron at 4th level and 5/cold iron at 6th level. 3rd level nets wild empathy, 5 tree meld (which does not italicize the reference to meld into stone) and 5th level also makes speak with plants constant, though it’s not italicized.

Attribute-bonus-wise, the dryad receives +6 Dex, +2 Con, +4 Int, +4 Wis, +6 Cha, for a total of 22 attribute points gained, though their impact for power-gaming purposes is decreased due to their dispersal. Testing the monster class left my hesitation regarding it by the wayside. I’m good with the dryad as presented and would ue her in all but the lowest-powered of games.

The satyr-race presented here gains +2 Con and Cha, is a medium fey with low-light vision and gains +2 to Perform (wind instruments), Perception and Stealth as well as +1 natural armor.

The 8-level monster class receives d6 HD, 6+Int skills per level, proficiency with simple and martial weapons, 3/4 BAB-progression and good Ref- and Will-saves. Satyrs begin play with DR 1/cold iron and increase that to 3/cold iron and 5/cold iron at 4th and 8th level, respectively. The class also nets a horn attack at 1d4 base damage, which increases to 1d6. Starting at 2nd level, the satyr can focus his magic in pipes, with a Will-save versus 10 + 1/2 HD + Charisma modifier to negate and an “only once in 24 hours”-caveat. Playing or continuing to play requires a standard action. 2nd level, these can be used 1/day and duplicate charm person, 4th sleep , 6th suggestion, 8th fear …but none of the spells are properly italicized and the text refers to harpy instead of satyr.

At 3rd and 7th level, the satyr’s natural AC increases by +2 respectively and 3rd level increases the Stealth bonus to +4, 5th increases the bonus similarly to Perform and at 7th level Perception is thus enhanced. 5th level nets +10 ft. base land movement rate.

Attribute-bonus-wise, the satyr receives +4 Str, +4 Dex, +2 Con, +2 Int, +4 Wis +6 Cha for a total of 22 points gained. The attribute-distribution over the levels, akin to what the dryad receives, is diversified enough to maintain functionality for the purpose of power-level of the satyr – no balance-concerns on my part.

A total of 6 feats are provided: Using Wis or Cha to determine bonus hit points, gaining a hoof attack, +4 to perception in woods and Survival to avoid being lost, drinking as a move or swift action…okay, I guess. Murmur of Roots nets a limited tremorsense in wooded terrain and Pied Piper is a cool one for the satyr, allowing them to call forth rat swarms – statblock provided, just fyi. This feat’s amazing!

As always, we do not get age, height or weight tables or FCOs, but we do get a nice glossary.

Editing and formatting are okay -the pdf sports both unnecessary cut-copy-paste glitches and a couple of annoying formatting hiccups. Layout adheres to Dreamscarred Press’ two-column full color standard and the pdf comes with a second, more printer-friendly version. The pdf has some bookmarks. The artwork is okay.

Jeffrey Swank’s Monster Classes: Fey ranks as one of the most refined from a mechanical point of view: In spite of the powerful tricks, the monster classes maintain a sense of balance I very much welcome. While the pdf has a couple of formal hiccups, this still remains one of the best installments so far. Hence, my final verdict will clock in at 4.5 stars, rounded up for the purpose of this platform.