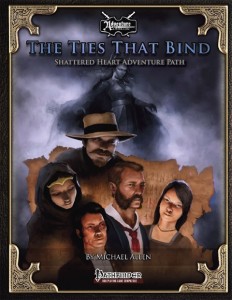 The first installment of the Shattered Heart-saga clocks in at 44 pages, 1 page front cover, 1 page editorial, 1 page ToC, 2 pages of SRD, 1 page back cover – but before we dive in, let me ramble a bit:

Shattered Heart is the AP/Adventure Arc that was spawned from AAW Games’ Pathmaster-contest back in the day: Basically, both reviewers (me included) and sales of the top 5 modules decided who would get to write the final AP. While I did like Michael Allen’s pitch, I considered it pretty ambitious and ultimately not as awesome as others – it was my dear friend Joshua Gullion (Rest in peace…)who insisted, passionately, that Michael should get the chance – and if the SUPERB Twin Crossing-module is any indicator, he might have been right. This saga’s very existence is thus, at least partially, here thanks to Joshua. Call me schmaltzy, but I wanted you to know that.

All right, still here? So, this AP takes place in Piccolo – a realm of halflings unlike any you have ever seen. Aventyr as a setting has seen quite a few cataclysmic events and few races were as abandoned by their allies, as harrowed by the events, as the halflings – marred by the dracoprime and harrowed by the insectoid høyrall, the halflings were on their own, lost the majority of the sacred trees of their goddess…and their society changed radically. As things stands right now, halflings have isolated themselves from big folk that left them to their fate and begun a system of indentured servitude of big folk as pretty much the only interaction with other races – and the module begins with the PCs escorting such indentured servants to the ship “Autumn Leaves” at the behest of a cleric of the Goddess, a female halfling called Carlyetta. Now if that does sound like an issue for anti-slavery paladins et al., it should be noted that Carlyetta does hold somewhat different views regarding the taking of servants and cooperation – Shattered Hearts, ultimately, is an AP not only dealing with the re-establishment of the fallen temples of the haflings, but one that is a battle for the very soul of a people – but that will only slowly dawn on the PCs, so conveying that this series is about the long reformation is smart and makes it possible to play this with any group.

The sea-journey towards Piccolo would be the true first massive section of this module and it sports a truly lavishly-rendered, gorgeous map of the Autumn Leaves – on board, PCs can find their sea legs and test their mettle as sailors in a truly interesting series of skill challenges to gain some respect from the clove-breathed bosun (and yes, there is an enhanced version of these challenges if the PCs refuse…or have fun and you want to challenge them more!) – and here at the very latest, something should dawn upon the PCs: There is a mechanic that you may hide or openly state, though I’d suggest the former: Community points. You see, each choice of the PCs, for example, to eat with the crew instead of superior food etc. influences in concise and sensible ways the community point total of the party, while divisive r elitist behavior may cost them such points, confirming the prejudices of the halflings. This mechanic influences the things to come throughout the saga – and yes, there is a shadowy eminence waiting to steer Carlyetta towards heresy and away from a mending of fences…but that will come into play in subsequent installments.

On board of the vessel, the PCs can help the indentured servants against the manifested attic whispers hiding below deck, defeat weird bilge slimes manifesting, find an issue with the food supply and fight back a giant octopus. From combat to skills to investigations, there is a LOT of ROLEplaying going on here…and then, the Nines, a settlement in Piccolo, finally can be seen – and yes, a top-notch, gorgeous full-color map is provided here. Here, interaction with Drigori Crosseyes, broker of indentured servants and other things, may have the PCs treat the servants better and secure an overland trek towards Pembroke…but that’s just one component of the material featured for the Nines: The arrival can be easily likened to a massively social sandbox where PCs may meet the idealistic Tryfena Hayweather (married to the more conservative Myghal Weskenver), a paladin…and reap the first rewards of the seeds they have sown – at the Eldermoot, a resolution pertaining the rights of indentured servants and freedmen alike will be decided upon, with the PCs’ actions directly influencing whether it passes or not.

After mingling with the peculiar halflings and their customs, the PCs will be en route toward coastal Pembroke (gorgeous overland map provided) – but on a beach (again, lavishly mapped), two days from Pembroke, the caravan happens upon a beached vikmordere ship alongside some rather lethal crabs – and on the ship, the PCs find a translated missive demanding the “foundling” to be delivered to the cyclopean ruins – and here, the module actually branches. At said ruins, Vikmordere raiders await with halfling hostages – you seen, some time ago, one powerful Vikmordere was reincarnated when slain while raiding Piccolo, thus giving birth to a gnoll…which was lost in the turmoil and storms and subsequently adopted by the halflings of Pembroke to grow up to become the extremely endearing and cute “Meatball” – brokering a sort of agreement between the vikmordere and Halflings should prove to be a rather interesting experience indeed!

Arriving in Pembroke, the village, beyond the threat of Vikmordere holding halflings hostage, will be subject to a dread raid of sea creatures – which, unlike the Vikmordere, aim to kill…and kill they do. In the aftermath, Tryfena is found slain at the hands of the undead rising from the waves. Whether they solve the issue with the Vikmordere by bloodshed or by diplomacy depends obviously on the PCs.

In order to access the temple, the PCs will have to find magical sargasso – for the temple to be re-sanctified lies beneath the waves of the sea, with coral-crusted steps allowing water-breathing pilgrims to move down…but alas, the weed has since then been turned into a lethal sargasso-fiend that first needs to be dispatched to once again allow for the access of the temple – and below the waves, the PCs have to breach the defenses of the darkness that has claimed the temple, a coven of sea hags and their numerous, lethal servitors, fighting in the sargasso-choked temple beneath the waves for the fate of the first lost temple of the mother goddess – and, again, reaping what they have sown in the aftermath of the module.

Handy community-tracking sheets and player-friendly maps (or Paizo/WotC-quality) complement a module that is absolutely stunning.

Editing and formatting are top-notch, I noticed no issues. Layout adheres to a truly beautiful 2-column full-color standard and the module comes with a lot of gorgeous full-color artworks and cartography that is on the highest level you could ask for. The pdf is fully bookmarked. I actually bought the premium paper print for this, just to have it in my library and I urge you to do the same – this book is gorgeous.

Do not be fooled by the relative brevity of this module: For one, there is not a single boring encounter within these pages. Secondly, this book has A LOT going on – it took my group 6 sessions to complete and they’re FAST. Still, I do feel like I somehow failed this module with this review, that I have not properly conveyed how incredibly good this module actually PLAYS: It is exceedingly hard to properly convey how good this book is. Michael Allen has crafted a module that is all about CHOICE – not an a) or b) either-or-scenario, but true choice in each and every choice the PCs make – and still maintains a tight storyline, an interesting cast of characters and soul. I love scenarios that feature a “reap-what-you’ve-sown”-mentality and this book allows for the decisions of the PCs to TRULY matter – we’re looking at a fight for the very soul of a whole people and every small decision MATTERS. It should be noted that, while this module is steeped in Aventyr-lore, due to Piccolo’s isolationalist stance, this module can easily be run in other settings as well.

Oh, and then there’d be the absolutely superb production values that very much exemplify how AAW Games has become a publisher of true premium modules. This is ambitious and brilliant and I wholeheartedly encourage you to check this out – my final verdict will clock in at 5 stars + seal of approval and nomination as a candidate for the Top Ten of 2015.

Prefer Fantasy Grounds? You can get that module for FG here on OBS!

Is D&D 5e currently your system of choice? You can get the 5e-version here on OBS!