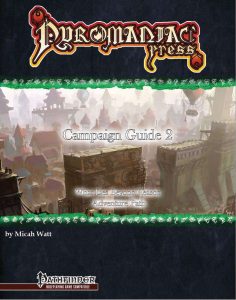 The second campaign guide for the unique What Lies Beyond Reason AP clocks in at 46 pages, 1 page front cover, 1 page editorial, 1 page Kickstarter-backer-thanks, 1 page ToC, 1 page SRD, 1 page back cover, leaving us with 40 pages of content, so let’s take a look!

The book also presents different notes on magical research regarding e.g. the runestone necklace, which, in a nitpick, isn’t properly italicized, while a bonus type is. This, though, is cosmetic, and as a whole, the formatting of such components has been properly executed. Slightly more annoying, a Knowledge (arcana) check is erroneously referred to as Arcana – it’s a cosmetic glitch, but it’s one that could be easily prevented; there is more than one instance of the like to be found within, with e.g. later flavortext referring to a Religion check instead of a Knowledge (religion) check. On the plus side, various means of learning a certain NPCS runic magic may be found – and yes, there is more than one way to potentially implement this into your game. Mechanically, it’s mostly what I’d consider to be a narrative-driven benefit, so while mechanically not necessarily mind-blowing, it does have plenty of use in the context of this Adventure Path’s storyline.

The book then proceeds to present two new sample NPCs – the first of whom, Quintus, a sorcerer-turned-lawyer, can help the PCs navigate the intricacies of Anduria’s legal system. He also despises the Seekers and has a rivalry with Damien going on, so plenty of dynamics added here. He does come with a solid statblock. The second would be airship captain Octavio Velderve. Both NPCs not only come fully statted, but also with their own, really nice full-color artworks. Good ole’ Damien gets a CR 15 iteration as well. The statblocks, as a whole, while not perfect, are more ambitious than what we usually see in heavily story-centric supplements, with hiccups falling on the smaller side of things, like CMB being off by +1 and the like. You should run into no significant issues using these.

So, the first sidetrek would be “Airship issues” can serve as an introduction to the new NPC Octavio, and centers on the attempted theft of one of the cities’ few remaining airships, the Emerald Vision (which is sometimes referred to as “Emerald Dream.” On the plus-side, we do get proper stats for the ship and airskiffs featured in this swashbuckling encounter; on the downside, the rules here do not hold up. At all. The interactions like landing on deck refer to “athletics” checks, lower-case “acrobatics” checks,  and while the ship per se has a TON of notes on steering mechanisms, interaction with machinery, etc., none of these have been properly translated to PFRPG, coming all just with the 5e-iterations, noting ACs, damage thresholds and HP, and things like Dexterity (thieves’ tools) checks. The details, in short, are non-functional.

Bank heist centers around an item that can serve as a means of severing Eiria from the Echo of Faith – the horn of shackle breaking, and as such, happens off screen if the GM elects not to run the scenario. The PCs are called upon to defend the vault in the noble ward against hydras, elementals and the like, reaching the scene of a massacre in progress, as hopelessly outgunned watchmen struggle against the monsters. The heist also does make the PCs witness the warping effects of a particularly nasty component of the Machine, which, while better, does at one point refer to the incapacitated condition in one of its effects’ entries – that should be helpless in PFRPG. The artifact in question, the horn, similarly has a minor snafu, referring to a 9th-level slot, when it should employ different verbiage in PFRPG. That being said, while not perfect, the conversion here is significantly better, though e.g. CMB-values and the like are off for one statblock. You can run this as written, though.

The third side-trek, “Beneath the Waves”, focuses on PCs being hired for a kind of treasure-hunt – potential proof that legendary hero Drexel has actually existed may have surfaced, and as such, are hired to travel to the Sunrise Isles and dive below the sea. While this excursion is pretty neat, the rules for diving gear (tubes etc.) have not been properly converted to PFRPG, making that component simply not work (poison and psychic damage reference, damage threshold – you get it) – which is a pity, considering that this might have elicited a bit of anxiety from the players, akin to how “The Terror”’s first episode ad this awesome scene. But I digress. The dread crab, the boss? It hasn’t been converted to PFRPG; it’s a 5e-statblock. WTF.

This final side trek, lost souls, has the PCs tasked by Silvira to enter the nine hells through the gate in Silverton to retrieve the soul of the dragon’s mate.  Yep, it’s a trip to Avernus, and an interesting one, as it basically is a mini-sandbox in a distinctly-different scenery that includes rules prohibiting mortals from flight, notes on how to handle death while in hell, and the like. Huge problem: The big, bad devil that has the soul? The rules for interacting with the fellow are based on 5e-skills, and make reference of item rarity. Which does not exist as a concept in PFRPG. And that after the hilarious DMV-ish reference and the per se much better rules-integrity here. That being said, on a successful sojourn, the PCs do get the means to call the mighty dragon to their aid once.

Editing and formatting on both a formal and rules-language level are not even close to what Pyromaniac Press usually offers. I seriously don’t understand it. The book features more formal hiccups than I’ve come to expect, but beyond that, its rules-integrity is so compromised, the sidetreks barely work. Layout adheres to a two-column full-color standard, and the book features solid full-color artworks. The cartography is well-done, full-color, and plentiful – I really enjoyed that aspect of the book, particularly the inclusion of the player-friendly versions. The pdf comes fully bookmarked for your convenience.

Micah Watt’s PFRPG version of the second campaign guide can barely be called such; littered with 5e-remnants, this is not up to the quality-standards we’ve come to expect from the AP. Formal hiccups and smaller glitches in PFRPG’s complex statblocks can be excused in great narratives, provided they don’t impede the playing experience, but this? This *does* impede the playing experience.

This is utterly heartbreaking for me, but I can’t consider this to be a good offering, even if you’re like me and have been more than excited by the What Lies Beyond Reason AP so far. Now, I do get it – I guess the PFRPG-audience for this is rather small. But still, I have been sorely disappointed by this conversion and its obviously rushed incarnation – RAW, half of the side treks are practically non-operational, even if you can look past the typos. My final verdict can’t exceed 2.5 stars, rounded up only courtesy of the neat maps.

You can get this very flawed book here on OBS.

Do you consider my reviews to be useful? If so, please consider supporting my patreon here. It keeps the lights on.