The Genius Guide to the Witch Hunter 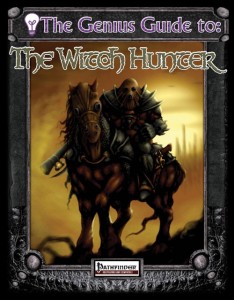 This is another one of my unfair reviews, where I take a look at an older pdf and try to gauge how well it has aged since its release, this time my target being the witch hunter base class, which came out prior to the APG and its take on the witch base-class. Sooo…do they stand up to the new class, are they compatible? We’ll see.

The Witch Hunter is a cherished trope in fantasy literature just as often being the holy crusader, the common man thwarted by magic as the vile bigot who slays anything he can’t understand and seems unstoppable to the forces he haunts. The class captures this duality and dauntless determination well by providing a broad selection of Witch Hunter talents and advanced talents (accessible at 10th level and from there on) to choose from to customize the individual. Among these abilities, damaging strikes to the spellcasting attributes can be chosen just as well as defensive ones to draw strength from a bias towards either the arcane or divine, resulting in a massive +4 bonus to saves, but also in receiving only half the bonus from respective buffs. The strikes the Witch Hunter can choose can be applied to the basic signature ability of devoted strikes, strikes that use the better of two attack rolls and add the hunter’s Wis-bonus to atk. The specific strikes he can learn are dependent on this ability and Wis governs a lot of his abilities, serving as a nice rules-tandem with the good will-saves to represent the impeccable determination of the hunter.

The class gets d10, full BAB, good will saves, 4+ Int skills per level and no spellcasting. The main focus of the class, of course, lies on combating witches. What are witches then and does the class still work now, after the release of the APG? Surprisingly, it works perfect, as its definition of the term “Witch” is rather broad and contains outsiders, undead, clerics with certain domains, sorcerers of certain bloodlines, specific wizards etc. Psionics could easily be added to the list, just model e.g. the bias after the other abilities.

We also get information on how to use them as both players and GMs and 2 new feats hat grant you extra devoted strikes and spellbane attacks.

Conclusion:
Editing and formatting are top-notch, I didn’t notice any glitches. Layout adheres to the three-column standard, is full color and nice. The pdf has no bookmarks, but at this length that’s still ok. Mechanically, the class is awesome, achieves what it sets out to do and offers us an elegant, cool addition to the class-roster. It has aged well and is still as easily usable in the game as when it came out. Smart wording, concise writing and solid rules make this a highly recommended buy. However, I do have some minor points of criticism: I’d love to see more Devotee and advanced talents for the witch hunter and some support for psionics. I know that’s not necessarily fair, but I’d love to see these additions nevertheless. Thus, my final verdict will be a very good 4.5 stars, rounded up to 5 stars for the purpose of this platform.