Mysteries of the Tengu Road: Yamabushi, the Sublime Transmuter 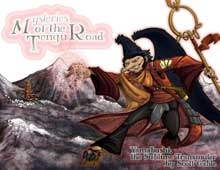 What actually do we get here? Well, the new 20-levels yamabushi base-class kicks the pdf off. The class is focusd on a perfection of both mind and body through transmutation magic. The class has d8, 4+ Int skills, bad BAB, good fort saves and access to full spontaneous spellcasting, restricted to the transmutation schools, be it divine or arcane. The associated attribute is Cha and you can ignore the divine focus component in divine spells, but both arcane and divine spells suffer from arcane spell failure chance if you cast them. Additionally, you’ll select a path that will determine some of the central aspects of the class, i.e. privileged spells that are always active on you, meditations, contemplations and the final lvl 20-realization. A side-box also explains the similarities between the yamabushi and the oracle and elaborates on revelations the yamabushi might take instead of his own contemplations.

The paths you get to choose from are:

– Path of the Razor Wind: This path focuses on wind-like spells, mobility and the ability to use attacks at range. The final ability is keeping all privileged spells active at once.
– Path of the Starry Eyes: This rather interesting path focuses on dimensional shifts, duplication and manipulation of perception and reality – nice for a rather cthulhoid/Himalayan-style yamabushi. The final ability is keeping all privileged spells active at once. I LOVE this path!
– Path of the Primal Dream: The shapechanger path enables the practicing yamabushi, enabling you to take extraordinary abilities and even use abilities from other creature they can polymorph into, possibly combining e.g. the extraordinary abilities of creature A with creature B. While a cool idea, I think it’s almost impossible to calculate the repercussions some combinations might enable the PCs to pull off. I’m not sure I’d allow this one in my game. The final ability is fast healing 5.
– Path of the Trying Steel: A path focused on melee, somewhat similar to battle oracle builds that can use special attacks to inflict bleed, reduce movement rates etc. The Revelation once again enables you to have all your privileged spells active at once. I liked this path.
-Path of the Maker’s Hand: The smith-path among the available ones and focuses on enhancing your equipment and forging magic items without knowing the spells necessary to craft the items as well as elemental powers and creatures. Again, the final ability enables you to to have all privileged spells active at once. This path somehow felt inconsistent to me – between elemental power, crafting and buffing I missed the clean line.
We also get additional information: The Daitengu race, a shapechanger-take on the Tengu as a playable race and the new yokai subtype. Unfortunately, while a nice bonus, the race suffers from the direct comparison with Rite Publishing’s excellent “In the Company of Tengu”. There are also two feats to change your known and privileged spells, which I liked in their elegant and simple design. A new weapon and weapon quality are also presented, but both are nothing to write home about. There are also three new spells, lesser beast shape, selective gravity and subjective time. The spells are surprisingly well-designed and imaginative. For your convenience, a list of all transmutation spells from core, APG and UM is also included.
The pdf concludes with the statblock of an iconic yamabushi.

Conclusion:
Editing and formatting are top-notch, I didn’t notice any glitches. The pdf is extensively bookmarked and thankfully comes in both a screen- and a printer-friendly version. Layout adheres to the three-column standard and is clean, concise and well-presented. The artwork is very comic-style and not my cup of coffee – it feels a bit childish and does not really serve to enhance the flair that well. The yamabushi-class itself is modular and well-written, though I’m still rather cautious of the Path of the Primal Dream. While I love the quirky, whacky feel of the class as a truly specialist caster with some weaponfocused abilities and its enlightenment/weird abilities, I think it fell short of its own potential in a key regard, namely its capstone abilities: With one exception, they are all the same. While I like the ability to have the privileged spells active at once and due to the different spell-lists, they still feel different, I would have nevertheless liked some more diversity there.

The Daitengu race didn’t wow me either – probably due to RiP already having done the excellent Tengu race-book. The additional material is of varying quality – the weapon and weapon quality and race didn’t wow me, but the feats, spells and spell-list rock. The book’s mechanics are sound, but between the artwork not being the best, the varying quality of the additional material, the potentially unbalancing path I still have a strange gut-feeling and after some careful pondering, I realized that, while I love the general idea of the class, there is something missing. Yamabushi somehow fall short of what they could have been – with some more ideas like in the Starry Eyes Path, some more of these excellent unique spells, I could have ignored the sub-par parts. As it stands, the pdf is an interesting purchase for the low price for those who are intrigued by the specialist caster approach, though not one I can unanimously recommend. Thus, my final verdict will be 3 stars.